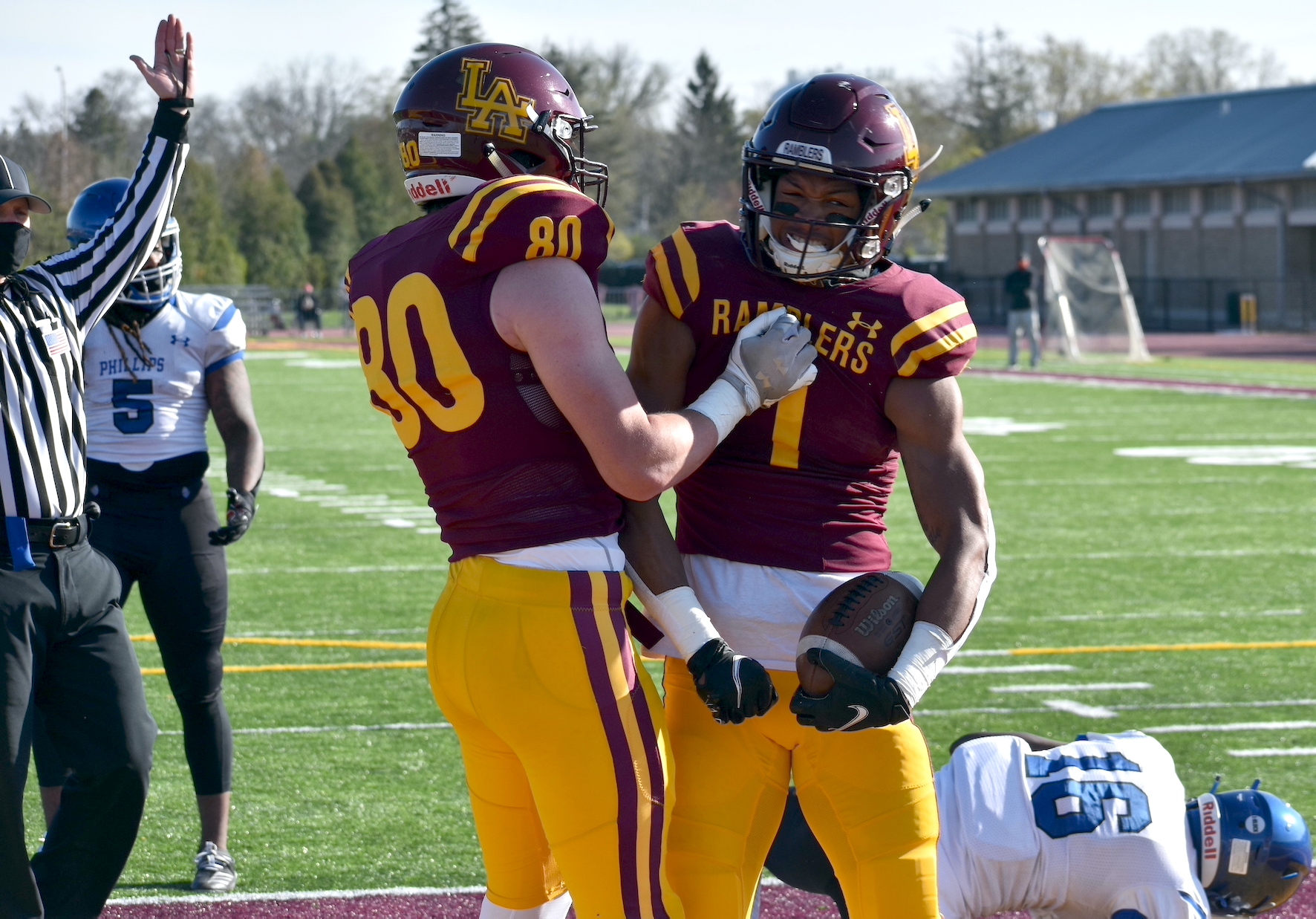 It took more than three and a half years and the COVID-19 pandemic but on Friday evening, April 16, Loyola Academy finally avenged its loss at Phillips in the opening game of the 2017 football season.

It was the teams’ first meeting since the 2017 game in which Phillips made a game-ending goal-line stand in winning 20-14.

Like Hillcrest, which also came to Hoerster Field with an unblemished record the previous Saturday, Phillips filled a vacancy on the schedule created by COVID-19 cancellations.

“It was very nice of them and Hillcrest to pick us up,” Loyola coach John Holecek said. “My hat is off to the coaches of both Phillips (Troy McAllister) and Hillcrest (Morgan Weaver). They both said: ‘It helps our program to play against your guys.’

“When Lane Tech canceled its game with Phillips, Troy called me. His team is extremely talented. I feel bad for those guys, because CPS (Chicago Public Schools) tied their hands (with pandemic restrictions). We’ve been able to do a lot more than those guys. We got 20 (workouts) in the summer and 20 in the fall and then some offseason starting in January (whereas Phillips was limited to practices immediately preceding the current season).”

Although the Wildcats (now 3-1) took the field averaging 46.6 points-per-game, their offense was no match for the hard-charging defense of Loyola (5-0) that was spearheaded by linemen Brandon Svets and Omaru Konneh and linebackers Braden Mullen and Dan Nacelli.

“It was a great team game, a great day for our last home game,” Svets said. “Our coaches prepare us, we practice and then we come out and perform — playing together, playing smart and playing fast. It’s really a lot of fun.”

On offense, the multidimensional Ramblers took command after receiving the opening kickoff, driving 74 yards in 14 plays for their first touchdown climaxed by a 22-yard pass from JT Thomas to Perrion McClinton in the end zone.

The other touchdowns were scored on a 16-yard run by Vaughn Pemberton in the second quarter, a 26-yard end around reverse by Aidan Brownlee in the third quarter and a 19-yard pass from sophomore backup quarterback Jake Stearney to Danny Collins in the fourth quarter.

Nate Van Zelst kicked a 39-yard field goal in the third quarter and the extra points after the first three touchdowns.

McClinton has blossomed as a wide receiver after beginning his varsity career last season as the starting quarterback.

“I’ve progressed and gotten better,” he said of the transition. “Our coaches and film sessions have helped me develop and I have a great group of teammates. When I go to Indiana Wesleyan next fall I’ll be playing wide receiver.”

On the ground, Pemberton (10 carries for 82 yards) and his understudy, Marco Maldonado (10 for 59), continued to be a potent 1-2 punch. In stark contrast, Phillips had only 17 net yards to show for 24 rushing attempts.

“I definitely think we’re making the most of this season,” Pemberton said. “We have the confidence we can beat anybody.”

“This happens to be one of our best seasons ever,” said Holecek who, since coming to Loyola in 2006 has won a school record 159 games and two state championships (2018, 2015). “We’re loaded with returning senior starters with a ton of experience.

“All the teams we’ve played are really good teams. With this schedule, it’s astonishing what these guys have done.”

“We’re just trying to be the best we can be,” Thomas said. “Our goal is not to lose a game.”

With no state tournament this unconventional season only one game remains — on the road against Catholic League nemesis Marist on Friday night, April 23.

The Red Hawks advanced to the Class 8A semifinals in 2019 after defeating the Ramblers 14-6 in the last game of the regular season at Hoerster Field and again back at Loyola 41-27 in the 8A quarterfinals.

Now that they’ve gotten even with Phillips, the Ramblers want to pay back Marist.

Like Thomas and Pemberton, Svets is philosophical about not having the opportunity to validate the Ramblers’ greatness by competing for IHSA Class 8A championship.

“It has definitely been a rewarding season,” said the Harvard-bound senior. “I’ll definitely remember the friendships I’ve made, the work I’ve put in.

“At Loyola it’s more than just about football. It’s about life and becoming better men. I feel the values of persistence and hard work are something I’ll carry with me for the rest of my life.”