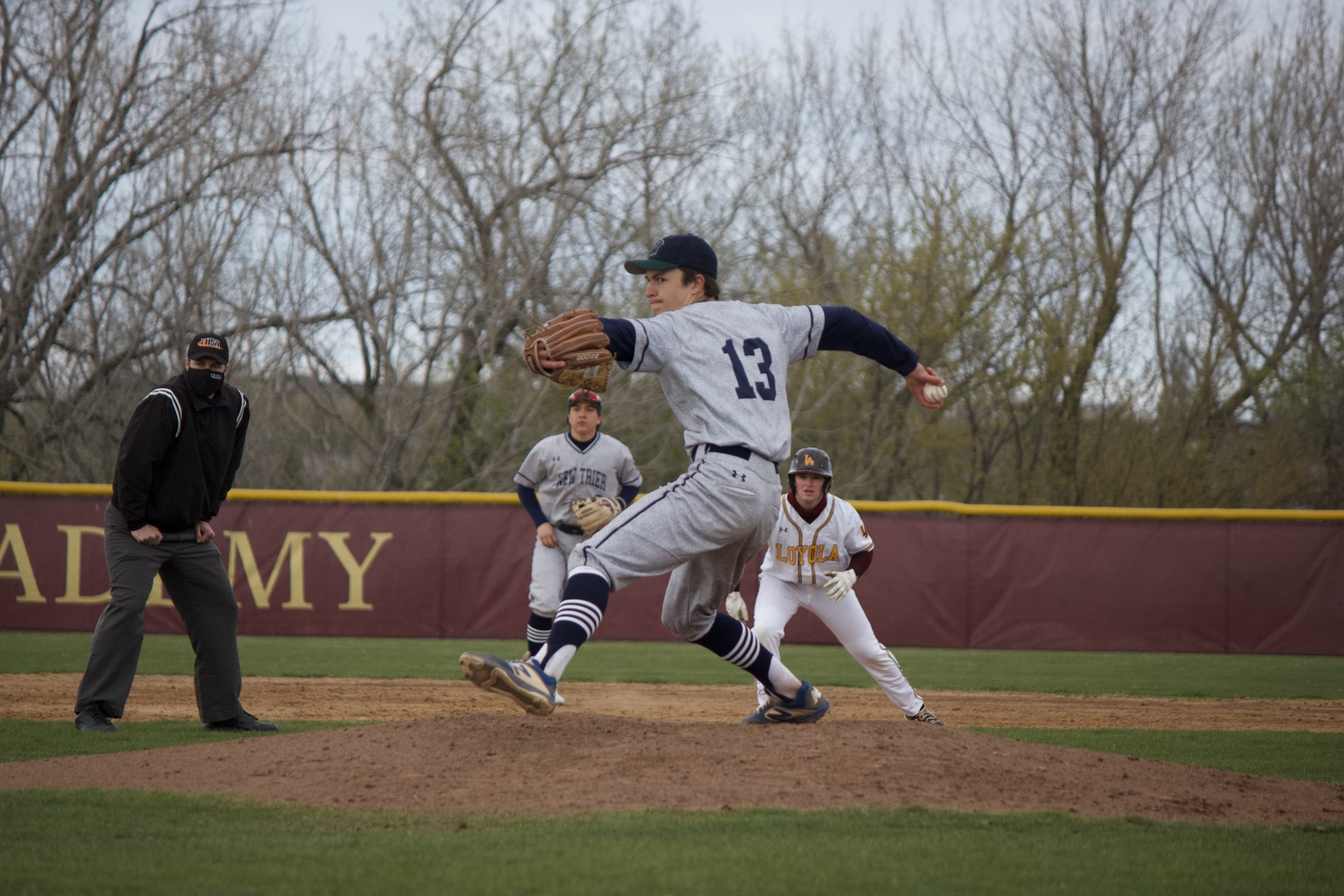 Whenever Loyola Academy and New Trier High School match up, down-to-the-wire finishes are often part of the story.

The latest chapter in the local rivalry saw another memorable ending, this time on the baseball diamond, as the Trevians survived a seventh-inning, four-run Ramblers’ rally to earn a 8-7 win Thursday, April 15, in Glenview.

New Trier entered the game’s final frame with an 8-3 lead but Loyola grinded out several walks and pounced on a pair of Trevians’ miscues to make the game a one-run affair.

With runners on first and third and two outs, the Ramblers sent Declan Dunham in motion from first base, but the home plate umpire called interference on the play, ruling that Loyola’s batter impeded the throw of New Trier’s catcher Alex Calarco.

That’s an out. Game over.

The narrow win was New Trier’s first of the young season, giving the Trevians a bit of revenge after the Ramblers’ spoiled their home opener with a 7-2 victory Tuesday, April 13, in Winnetka.

“I think we did a better job with two strikes today,” New Trier head coach Mike Napoleon said. “Our two-strike approach was much better today. I thought we hit the ball decently and we put the ball in play today.”

The Trevians jumped out to a 3-0 lead in the second inning after their first four hitters of the inning reached base. Andy Pekar and Oliver Barkal each drove in a run for New Trier, while the Trevs scored a third on a wild pitch.

Loyola wasted no time in responding, as the Ramblers plated three second-inning runs of their own, courtesy of a two-run double down the third-base line by junior Mikey Regan and an RBI ground out by Brendan Cohn.

A two-run home run from New Trier’s Louis Florida gave the Trevs the lead back in the top the third.

New Trier starter Dalton Hastings shut down Loyola after the Ramblers’ three-run second. The junior right-hander retired nine of the next 10 batters he faced.

Hastings allowed four hits and three walks over his five innings, while striking out five.

“I thought Dalton was really good on the mound,” Napoleon said. “He had that one inning that he struggled a little bit but then he bounced back and had three quick innings after that.”

A one-run loss was not how the Ramblers hoped to follow up their opening-day win, but head coach Chris Ackels was proud of the team’s resilience.

The early-season series was the first two games both teams have played in almost two years as all spring sports were canceled in 2020 due to the COVID-19 pandemic.

Getting back on the field was already a win for both teams.

“It just feels really good to be back and to see the kids competing and fighting,” Ackels said. “Last year hurt; it hurt big-time. So to see them back on the field (is great). … I don’t know why I feel this good after a loss. I think it’s just because baseball is back in our lives.”

Although each team’s campaign is just beginning, both programs have high expectations for this season.

“I’m excited about (this team),” Napoleon said. “I think that we have good pitching up and down — we didn’t show it yet in the first two games — but for the most part I think we are going to be strong on the mound. And we have a lot of team speed. It showed a little bit today so … we’re going to be able to run a little bit.

“Defense and speed is going to help, and as long as we put the ball in play on offense we can make something happen.”

Ackels is equally excited about the 2021 Ramblers.

“They’re just fighters,” he said. “It’s all about our process. When we commit to our process and we commit to doing things our way, we’re going to get the good result more often than not.”