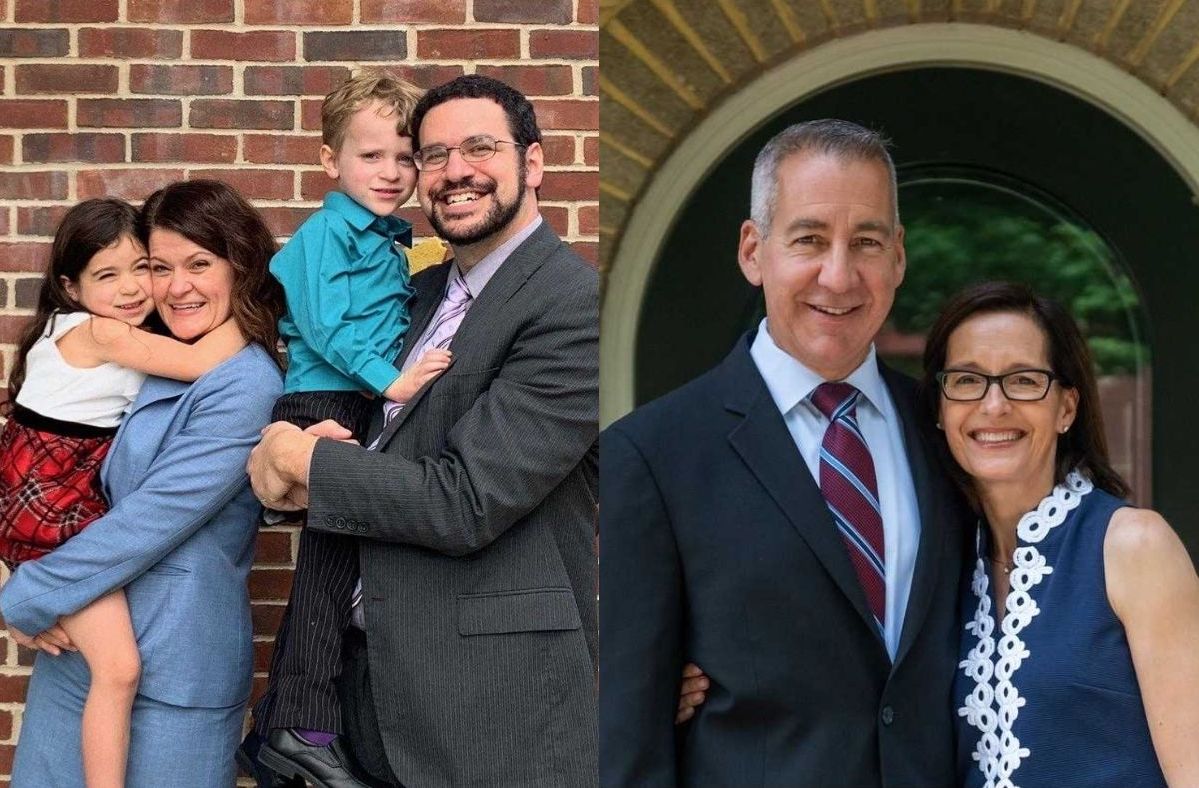 Ross Friedman (left, with wife Suzie and children Abigal and Zev) and Susan Fortier (right, with husband Steve) have scheduled more than 700 vaccine appointments for others. | Photos submitted

Walgreens releases COVID-19 vaccine appointments by 6 a.m. every day. And sometimes in the early afternoon and late evening. CVS and Walmart drop their openings at midnight; though, CVS is usually late. Walmart sometimes drops more at noon, too. And then there are the public-funded sites, from the county and state, which can announce available doses anytime. You gotta keep an eye out.

Well, you don’t have to, because Wilmette residents Ross Friedman and Susan Fortier do, and they’ll take care of it for you.

All you have to do is ask.

They are vaccine hunters, who for the last two months have located and secured vaccine appointments for more than 700 North Shore residents.

“We need to all be in this together to get out of it together,” Friedman said. “The quicker we get those shots in the arms, the quicker that we can … return to the life we had before the pandemic. So the more people are able to get out there and help, the better it is for everybody.”

Friedman and Fortier virtually met through the Wilmette Caretakers Program, a collaboration between the Village of Wilmette and the Wilmette Women’s Club that is dedicated to securing vaccine appointments for those who may have a difficult time, such as senior citizens and the less mobile.

The pair did not know each other before joining forces as Caretakers, but each had helped individuals close to them get the vaccine. So when the women’s club needed to streamline the vaccine-hunting process, Friedman and Fortier took center stage.

“I think their initial thought was to have each volunteer work with a senior to find them a shot,” Fortier said. “… I had already gone through the ropes and had some tips and tricks, and he did, too, so we quickly determined that it would be more efficient for everybody if we booked the appointments and the other volunteers would do the management and talking with the seniors.”

Under the smoother process, a group of volunteers records the names and information of those who need appointments and passes it along to Friedman and Fortier, who go to work.

Once an appointment is scheduled, word goes back to the first group of volunteers, who is in charge of managing the appointment details with the resident in need.

Through this process, the Caretakers have helped about 100 Wilmette residents. But that’s just the beginning for Friedman and Fortier.

Fortier is one of the administrators of the Facebook group Chicago Vaccine Hunters, which has more than 90,000 members and is an open forum for vaccine seekers and vaccine hunters.

“As moderators, what we try to do is verify information that is posted,” she said. “If someone is saying shots are available, we’ll often call just to make sure. It’s most helpful to alert people when there are releases. … For those of us who book lots and lots of appointments, it’s super helpful.

“It’s crowdsourcing at its best.”

And that’s still not all. Fortier works a lot with another North Shore vaccine hunter, Avi Rubin, a Highland Park teenager who made headlines for founding Vaccine Volunteers IL.

He said he’s booked “around” 520 appointments for locals, which makes for more than 10 per day since the end of February. But, of course, not every day is the same.

“Some days are less and some days, like (Monday, April 12), it was closer to 40 people,” he said. “It was a crazy one with Johnson & Johnson (being paused after a handful of adverse reactions) and two things happened with that: A. People who had Johnson & Johnson appointments needed other appointments and I think on top of that it inspired people who had not reached out for help yet be like, ‘Oh, gosh, there’s going to be less supply now.’

“So that combination made (April 12) a crazy, crazy day.”

Friedman started a Google form that is getting plenty of circulation. The gathered information feeds into a spreadsheet, which he just attacks day after day.

The form does not contain unnecessary personal information, such as why individuals need a vaccine, but sometimes, Friedman said he hears special stories anyway. From the grandmother who had not seen her family in a year to the parent who was living in fear because her child had a high-risk ailment to the working mom who could not find time to keep up with vaccine availability, they make it worth it.

“You end up finding out the story afterward when they volunteer it,” he said, “but it’s those kind of moments and hearing what the story is and why (the vaccine) meant a lot to them, it makes you want to keep going and helping as much as you can.”

Fortier receives most of her leads from Rubin’s Google form or the Chicago Vaccine Hunters Facebook page. She has also helped some students of Northwestern University.

Both agreed that the process has been simpler as vaccine supply has increased and as administrators, such as Walgreens, have improved their workflows.

They also both got into this for the same reason: helping people get back to normal, including themselves.

“The past year our quality of life has changed so dramatically,” Fortier said. “To me, the more folks we can get vaccinated, the sooner we can get back doing the things we love and seeing the people that we love, having a normal life back.

“And to the extent we can eliminate this disease and these deaths, we have to do everything we can.”

A recent image of that normal life may depict Friedman and Fortier, whe are both vaccinated, meeting in person for the first time.

“I want to invite him and his wife over for a drink in our backyard,” Fortier said. “We’ve texted thousands of times but haven’t spent any time together. I’m looking forward to it.”