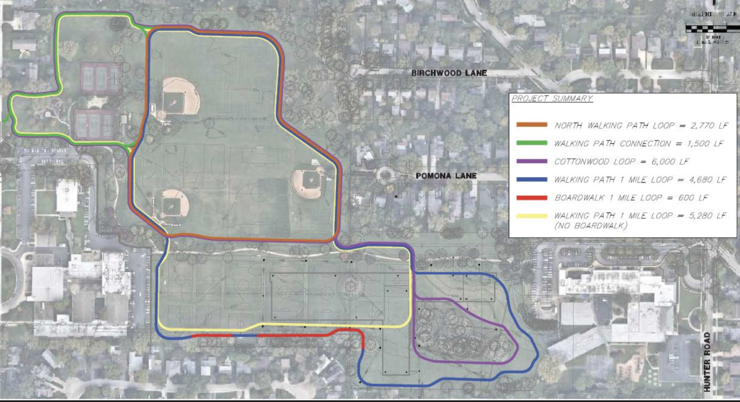 Two significant additions are coming to Wilmette’s Community Playfield as Park Board commissioners approved a new walking path and bathroom structure during their four-hour meeting on Monday, April 12.

Although commissioners OK’d both amenities for the park, they could not reach a consensus on specifications for either.

More than a dozen residents came in front of the board to address the playfield project.

While many residents seemed to be encouraged by the bathrooms, several asked the board for a more detailed plan for the park.

Rick Prohov, a resident of Pomona Lane, said he was disappointed a more comprehensive plan was not in place.

“The members of the community around this park have sought a plan,” he added, noting that a plan doesn’t need to be as detailed as the comprehensive plan for Gillson, but that one should still be in place for Community Playfield.

A free-standing bathroom structure was approved; however, a location for it was not. Commissioner Bryan Abbott was joined in dissension by commissioner Mike Murdock, who is the chairman of the parks and recreation committee.

A key point of discussion among the board was the possibility of Community Playfield patrons using available bathrooms at Wilmette Junior High School, which is adjacent to the park.

But the board lamented that there is no indication when or if an intergovernmental agreement between the Wilmette Park District and Wilmette School District 39 would be finalized.

Murdock said he is still hoping something could be worked out with D39 and that he felt it was premature to discuss locations at this point.

Abbott proposed to table a vote on bathrooms, saying he hopes to allow the three incoming Park Board commissioners the opportunity to have full discussions with greater context from D39.

The two potential locations for the bathrooms generating the most interest are an option located near the baseball field that is closest to the parking lot (Option B) and an option in the center of the park (Option C).

Despite not yet agreeing on a location, all commissioners all expressed support for having a free-standing, running-water bathroom at Community Playfield.

“We’ve been talking about this long enough — it’s 2021, bathrooms at a community playfield like ours have been the norm for decades at this point,” board president Gordon Anderson said. “We are way, way overdue. And pushing this out and delaying this is to me, just not going to be anything that I can support. This is something we need to move ahead with that is long overdue.”

The motion was approved via 6-1 vote, with Abbott as the dissenter.

The board, however, could not agree on the length of the path, as commissioners were closely split between a half-mile and full-mile route. The motion included a provision that the path could be either distance — but no final determination was made Monday night.

According to preliminary financial estimates from the park district, a one-mile path would cost $481,586. The half-mile option would cost $176,380.

Residents who spoke leaned toward a half-mile path because of its smaller impact in regard to cost, maintenance and community disruption.

No exact completion timeline for either project was presented at the meeting.