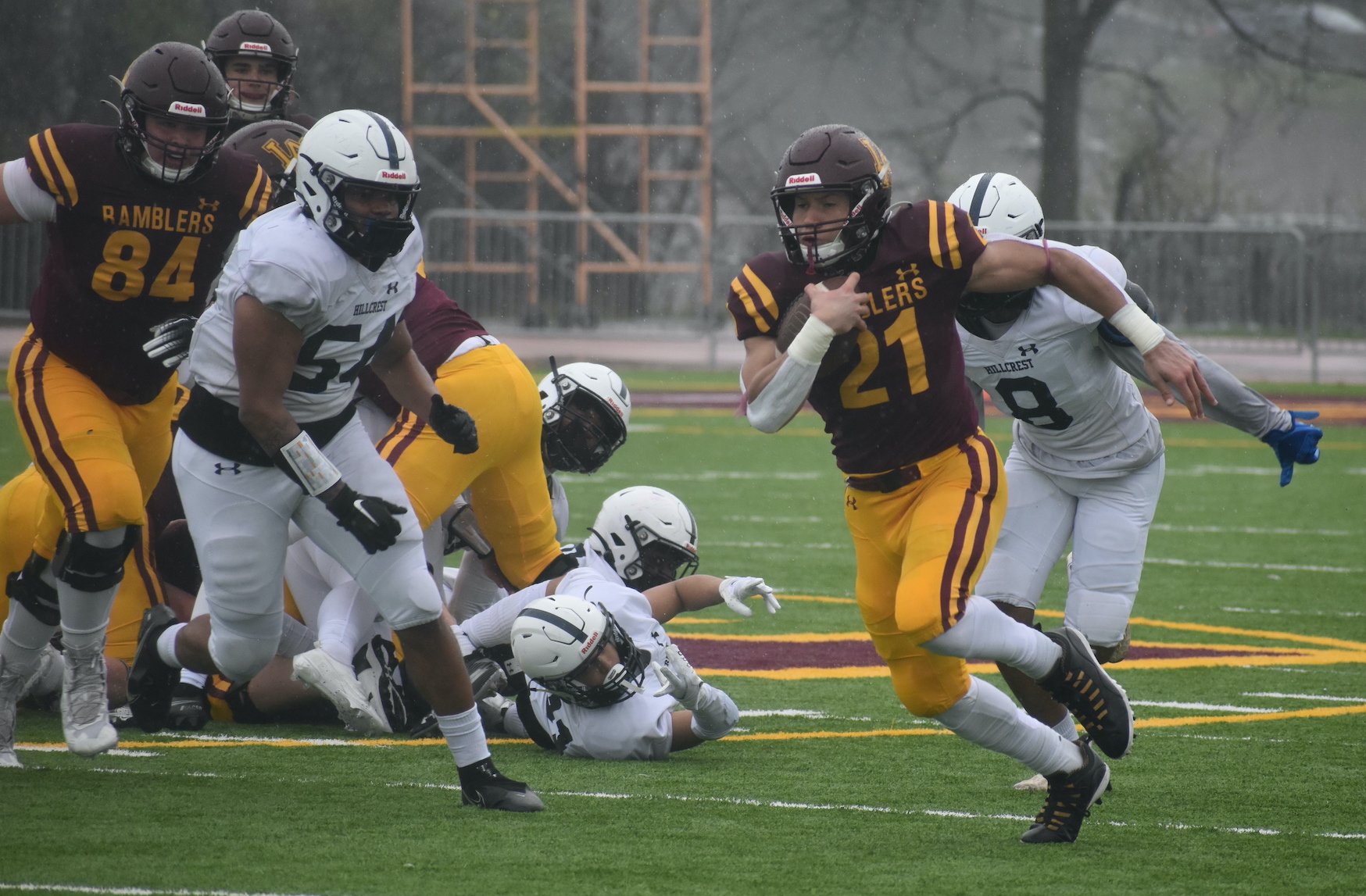 A Hillcrest football team that came to Hoerster Field unbeaten and flaunting an offense averaging 48 points-per-game learned the hard way that Loyola Academy is the mightiest team in the Chicago metropolitan area.

With Vaughn Pemberton’s breakaway runs of 64, 49 and 84 yards for the first three touchdowns setting the tone for the tutorial, the Ramblers remained unbeaten by scoring a compelling 37-0 victory on Saturday, April 10.

After rushing five times for 204 yards in the first half—giving him 582 yards in 72 carries in the four games this season—the senior stalwart got the rest of the day off.

He played down his performance and praised his teammates.

“I ran behind Josh Kreutz — it was his first game back,” pointed out Pemberton. “Josh made a huge difference for us.”

Earlier this season, the prognosis was that Kreutz — the 6-foot-2, 260-pound senior who became a starting offensive lineman as a sophomore and is the son of six-time NFL Pro Bowl center Olin Kreutz — wouldn’t play until he began his college career at the University of Illinois next fall because of an injury to his ACL.

Like Pemberton, Kreutz was a paragon of modesty following his surprising and impressive return as an offensive tackle.

“I only played seven plays,” he said.

But three of those plays paved the way for Pemberton’s breakaways, the first two of which came in the opening quarter.

Trailing 14-0 in the second quarter, the Hawks (3-1) advanced from their 16-yard line to the Loyola 1, where they were in a first-and-goal situation. After an errant snap put the ball on the 14, Hillcrest’s Mar’keise Irving’s 12-yard run put the visitors back in excellent scoring position.

Irving then was stopped for a yard loss, making it fourth-and-goal on the 3-yard line.

On the next play, outside linebacker Liam Conaghan made the first of several outstanding plays for the Ramblers defense when he threw quarterback Caleb Treadwell for a 7-yard loss, giving Loyola the football on its 10-yard line.

Pemberton carried it to the 16 on first down to preface his 84-yard TD trip.

“That was a huge momentum shift,” coach John Holecek said of the defensive stand that was followed by Pemberton’s longest run of the season. “If they score it’s 14-7. Instead, it was 21-0 (with 2:19 to play in the first half). When it counted, we stepped up.”

With 36 seconds remaining in the half the Ramblers struck again.

This time wide receiver Perrion McClinton beat his defender inside to the end zone and caught a 15-yard pass from JT Thomas. Nate Van Zelst added his fourth extra point.

Loyola substitutes got a lot of playing time in the second half when the Ramblers padded their lead on Van Zelst’s 32-yard field goal and a 4-yard run by sophomore Jake Stearney, who’d gone in for Thomas at quarterback.

Highlighting the Ramblers’ defensive performance in the second half were a pair of sacks by Braden Mullen, another sack by Dan Naselli, a 30-yard fumble recovery return by Brandon Svets and an end zone interception by Will Maheras.

In addition to his field goal and four extra points, Van Zelst got off a 56-yard punt and averaged 59.4 yards on his seven kickoffs.

Although Treadwell and Irving, a University of Minnesota recruit, often eluded tacklers to gain hard-earned yardage, the Ramblers kept the damage under control.

“They had really good all-around athletes but we kept the zero on the board,” Mullen said. “Our offensive line came up huge, and Vaughn had a great game.”

After Pemberton left the contest to rest on his laurels, Marco Maldonado continued to give the Ramblers a solid ground game, gaining 62 yards in 11 carries.

In the air, they also were effective as attested by five completions in seven passing attempts for 35 yards by Thomas and Stearney, who completed his only pass for 3 yards.

“Looking at the films this week I thought it would be a tougher game,” Holecek said. “They’re well-coached. They do things the right way. They have some outstanding athletes, and their quarterback (Treadwell) is really good.

“Our overall strength in numbers and depth really hurt them. They got tired.

“When it counted we stepped up. There are some things we did well and a lot of things we didn’t do well. The (lack of) discipline (at times) was what disappointed me the most.”

Hillcrest (3-1) wasn’t put on the Loyola schedule until earlier in the week. The Hawks replaced Benet Academy, which had to cancel because of COVID-19 cases at the school.

Now, the Ramblers (4-0) are searching for another opponent for the upcoming weekend.

“There are other teams out there who got canceled because of COVID,” Holecek said. “If we find a team, I would think it will be an away game on Friday night.”

The season-ending game will be on Friday, April 23, on the road against Marist, the team that spoiled the Ramblers’ 2019 campaign by defeating them in the last regular season game and then again in the quarterfinals of the IHSA Class 8A tournament at Hoerster Field.

When Holecek spoke to his players after the Hillcrest game he told them: “You’re No. 1 — everyone is saying that — but you can get better.”