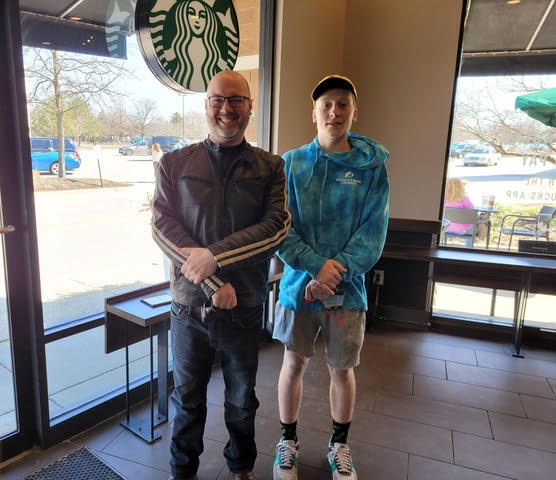 Griffin Baron (left) and Jonathan Celner reunite at the Starbucks in Edens Plaza in Wilmette, where Baron helped Celner's mother deliver him in the bathroom. | Photo Submitted

A very special reunion took place at the Starbucks in West Edens Plaza in Wilmette on Sunday, March 21.

The year was 2002 when Griffin Baron and Jonathan Celner last encountered one another. Baron was a 21-year-old supervisor at that same Starbucks, helping Lisabeth Rohlck deliver her baby on the store’s bathroom floor. Jonathan Celner was that baby.

Until last Sunday, Griffin and Jonathan had not laid eyes on each other since.

“This was a very big thing for me and I had always wanted to know what happened to him and to the family, and what he came out to be, and I wanted to give my perspective on that day,” said Griffin, a 1999 New Trier graduate who grew up at 5th and Maple streets in Wilmette. “It was definitely a big smile moment for me when we saw each other. He’s a really good guy.”

The Record was unable to reach him for a comment for this story.

“Our meeting was great,” Griffin said. “We talked for about an hour. He is a super cool kid. He didn’t know a lot of the insanity of what it was like. It was good to finally fill in all these holes that we had.”

While at Starbucks, Griffin introduced Jonathan to the baristas on duty and told them the story of what happened that afternoon.

“They thought that was cool,” he said.

Griffin — now a Chicago resident, administrator with the Chicago nonprofit Centro Romero, and married father of two — met up with The Record to share the entire story.

It was around 5 p.m., and Griffin was eating a meal in the back room. Lisabeth, 37 weeks pregnant, had begun feeling pains worsen in her side, so she pulled off the Edens, and headed into the bathroom at Starbucks.

“I heard high-pitched screams coming through the wall and thought someone had locked themselves in the bathroom,” said Griffin, who then walked out front to see what was going on.

A customer, Tricia Monico, went into the bathroom to see was happening.

With the police notified, Griffin said: “I grabbed some hot towels because that’s what I think you do, and I open the bathroom door and there’s this woman on the rail huffing and puffing and ready to go and there is the head, three quarters out, and there is Tricia holding her hand and saying ‘You’re doing great, you’re doing great’ and four minutes later: ‘Waaaah.’”

Medical personnel arrived, and Baron shouted to the EMTs, “get the hell in here and cut this cord.”

In short order, the baby was all wrapped up and Lisabeth was on a stretcher and on the phone telling her husband, who was on business in Atlanta, that she had just had the baby.

But the chaos had just begun.

“Everyone starts coming out of the stores in the mall, and they’re applauding,” Griffin recalled, “and they’re coming into the store and I’m telling them the story and they’re saying, ‘That’s really cool, can I get a Grande?’”

Somewhere in there, Baron took $60 from the till and gave it to a coworker to get him some clothes next door at Carson Pirie Scott because he is covered in whatever was on the bathroom floor, post-birth.

And then the local press got wind of it, and the calls started coming.

Starbucks doesn’t let any of its employees talk to the press without corporate approval and that had not happened, Griffin said.

Corporate had, however, called a hazmat team to come clean up.

“I was doing a close-open that night which meant I had to be there at 4:30 the next morning. I get there and you could have eaten off that floor,” he said.

And then, starting at 5 a.m., the avalanche of press calls began.

“ABC, CBS, NBC, radio, the newspapers, all of them. And corporate calls and says ‘You’re the shift manager on duty so you’re officially the person to be the spokesperson for this,’” he said.

The decision was made to have a press conference at Evanston Hospital, with Lisabeth, Tricia, Griffin and two other Starbucks employees who were a part of the action.

“There were a lot of TV cameras and a line of microphones,” Griffin said. “The poor mom, she had just given birth to a baby and they caked her up with makeup, wheeled out in a wheelchair and she is holding this baby (Jonathan), and I’m just saying, ‘Please let her sleep a little bit.’”

All the while, Griffin’s mother is in high gear.

“She is loving this. She’s taping everything on the news, and I come in the next morning and all my regular customers on the morning rush start applauding,” he said.

And then came the call from Aunt Dolores.

“Aunt Dolores lives in Buffalo and if she tracks me down at work, that means somebody died or something,” Griffin said. “I pick up and she says ‘Why am I eating oatmeal and watching you on ‘The Today Show?’ The story got picked up and went national. It even ended up on the cover of People Magazine.”

A line Griffin used a lot during his moment in the press spotlight: “There were three of us who went in, and four of us came out.”

“I did a Google search a few years ago. It turned out the mom died of cancer in 2012, and I was really sad to hear about that,” Griffin said. “They named their son Jonathan, but I had always looked him up as Jonathan Rohlck, which was her last name, and I could never find anything.”

Then came the breakthrough earlier this year.

“I looked up Lisabeth Rohlck and found her name attached to a GoFundMe because Jonathan’s father had died last year of a heart condition. I was just heartbroken about this. Those poor kids (Jonathan and his brother, Aidan). I went on GoFundMe and donated for the two kids and wrote in the memo box that I had wanted to talk to the family and give them my perspective on that day.”

Jonathan’s aunt emailed Griffin back, told him where Jonathan worked, and that he went by his father’s last name, Celner.

Griffin found him on Facebook, and sent him a message with the note: “Random question: Are your parents Lisabeth and Tom?”

“I didn’t hear from him for weeks and then got a response. He said ‘Yes.’  We both just kind of flipped out.”

And then they quickly arranged to meet at Starbucks, the scene of Jonathan’s birth.

In the meantime, Griffin’s mother still had the VHS tape of all the footage. Griffin had digitized it, put it on YouTube, and sent it to him.

“He loved it,” Griffin said.

As Griffin and Jonathan said their goodbyes, both agreed that yes, they would stay connected.