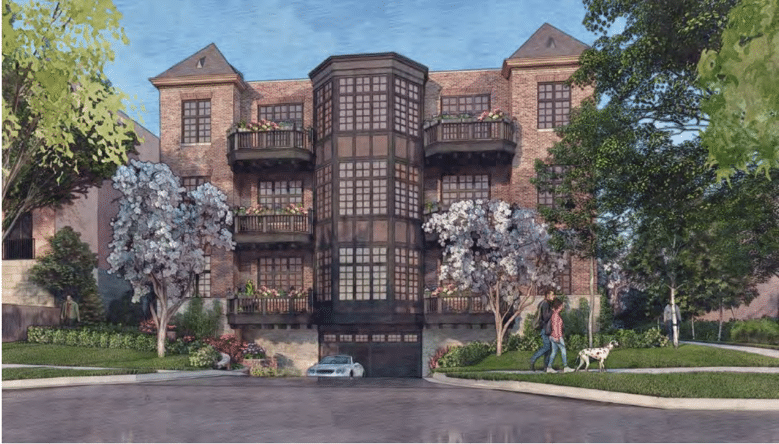 Council members OK’d the construction of the five-unit multifamily building at 688-694 Green Bay Road during a special meeting on Tuesday, March 9.

The subject property is approximately 15,000 square feet in size and is located on the west side of Green Bay Road between Pine Street and Westmoor Road, according to village documents, and it will replace a vacant single-family residence is located at 688 Green Bay Road and a vacant building at 694 Green Bay Road.

Previous versions of the project were met with unfavorable reviews from both local officials and neighbors.

In October of 2020, Winnetka’s Planned Development Commission recommended denial of the project because the building’s size and the significance of the impermeable lot coverage.

But the group behind the project, Walden Development, returned to the commission in early February with a scaled-down proposal that revised some neighbor concerns and reduced the overall mass of the building.

As previously reported by The Record, the updated proposal moved the building to the south and rotated it 180 degrees.

Another substantial change was a reduction to a three-story structure, rather than the original four-story proposal. The west side of the building that faces residential homes on Walden Road is now proposed as two stories, according to project plans.

The overall number of units was also reduced from six to five. Those units are planned to be between 2,200-2,400 square feet and feature 10-foot high ceilings, village documents say.

Pedestrian access to the structure is now proposed along the north side and access for vehicles is provided via one driveway that is planned to run directly to the included lower-level garage at the front of the building on Green Bay Road.

The building’s footprint remains the same as first proposed.

“We have a plan that I think most people were comfortable with,” said Rick Swanson, president of the development group behind the project. “While I know you can’t please everyone, I can report that we’ve had some very favorable and productive discussions with neighbor representatives since the planned development meeting. We continued to refine some of the things that were of concern to them.”

Council members echoed the thoughts of plan commissioners when reviewing revised plans, expressing thoughts that “this is the right kind of project for Winnetka.”

“I liked this project when it was first presented. I still like the project. I think it’s a very attractive project,” trustee Andrew Cripe said. “Green Bay Road is a large street with larger buildings. I candidly don’t see this as being out of scale with the other buildings on Green Bay Road.”

Although officials unanimously supported the project, there still appears to be a level of contention among some neighbors.

Three nearby residents addressed the council during the public comment portion of the meeting and expressed concerns about the size of the building, privacy and water retention.

Mary Jo Bushell, who lives on Walden Road behind the development, called the proposed building “massive and intrusive.” She added concerns about stormwater management and said the proposed balconies in the project will result in a loss of privacy.

Brandie Siavelis, who lives on Cedar Street, spoke in favor of the project.

“We feel that after the failed One Winnetka project that our community now has a reputation for not wanting any sort of progress,” she said. “There hasn’t been any sort of new construction for any sort of multi-unit homes for almost 15 years. This is a small boutique building with five units that will add a beautiful piece of architecture to the landscape of Green Bay Road by a well respected architect.

“As a real estate broker for 20 years, I can tell you that there is a desperate need for housing that caters to empty nesters in our community. … Please do not let another opportunity for progress in our community stall.”

The Village did receive one formal objection to the project. If the village received objections from 20 percent of property owners within 250 feet of the property, approval of the development would have required a supermajority vote from the council, officials said.

Several conditions of approval were including. They are: limited use of an outdoor roof deck to only residents of the third floor; an $18,000 contribution to a Village electric vehicle charging station; inclusion of on-site charging stations; installation and maintenance of landscaping; and 18 months to submit final plans, per village code.

The Record is a nonprofit, reader-funded news site. Our public-service journalism, including coverage of local government action, is free for all to read.