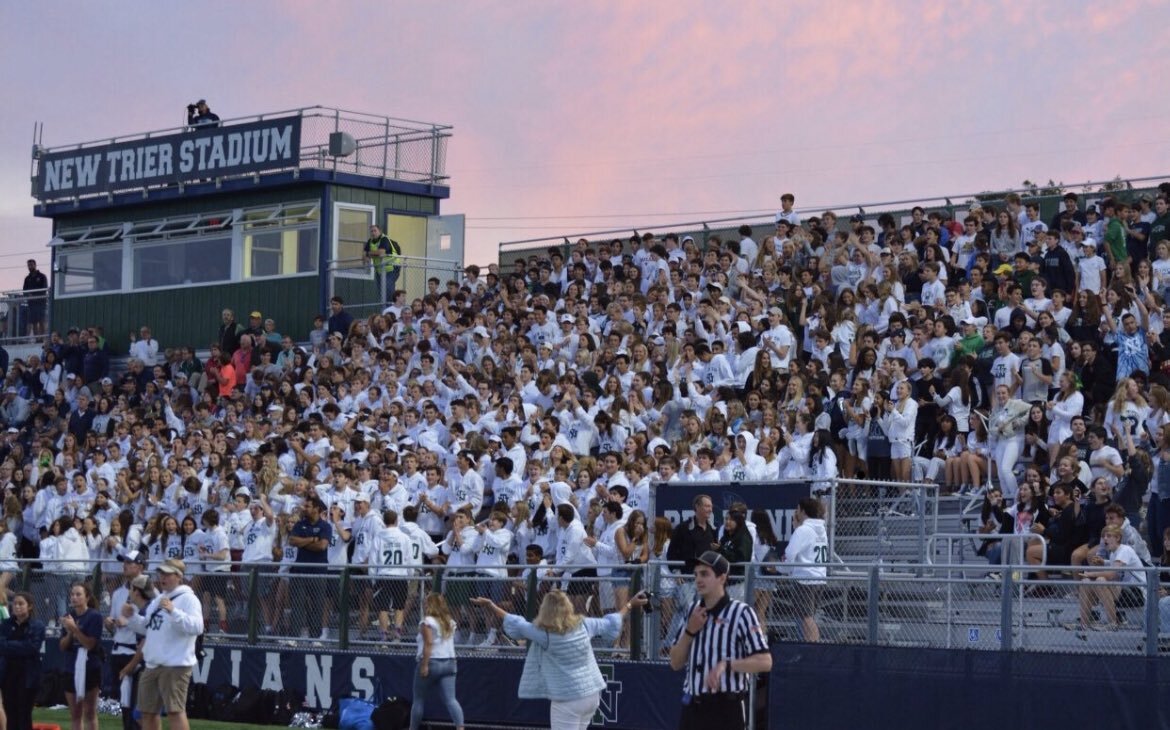 While a football crowd cannot be this large, the state is now allowing 20 percent capacity at outdoor events. | The Record File Photo

And the larger crowd can go wild.

The state guidelines announced Monday, March 8, to allow for 20 percent capacity at outdoor sporting events could increase local crowds up by 10 times.

The news was initially delivered in the context of allowances for Chicago’s professional baseball teams, the Cubs and the White Sox, but apply to high schools that are about to begin their football seasons.

In normal times, New Trier’s football stadium in Northfield can welcome upward of 3,000 fans. Using that number, the new guidelines would allow around 600 people to attend Trevians home football and soccer games.

Fontanetta said, however, that will not necessarily be the number used, as officials from New Trier’s conference, the Central Suburban League, are planning a uniform capacity number to use across all league stadiums.

Loyola Academy’s Sachs Stadium in Wilmette can also hold thousands of fans. Ramblers football coach John Holecek estimated 3,000; though, during a 2015 playoff matchup with Homewood-Flossmoor, close to 5,000 were in attendance, he said.

Those numbers would also suggest the allowance of about 600 total fans. The Loyola athletic department did not immediately return a message from The Record.

“We were all hoping for this to happen,” Holecek said of the increased capacity. “I’m very excited for our players. They’ll at least get parents and hopefully grandparents there — and maybe some students who provide some energy and some real environment.”

Spring sports are on deck and can begin practice in mid-April.

There are six weeks in the season with New Trier playing all five teams in its half of the CSL before ending the season with a CSL crossover clash, playing against a team with a similar record from the CSL North on April 23.

The Ramblers also play a conference slate, but have an open date in Week 5 (April 16-18), and Holecek said they are still searching for an opponent.

Capacity remains unchanged — 50 or 50 percent, whichever is smaller — for indoor sports, such as water polo and boys and girls volleyball, which are all set to begin in the coming weeks.

Other outdoor sports, such as baseball and softball, draw smaller crowds than football, Fontanetta said, and he does not anticipate an issue with the 20 percent capacity.

A chance at glory

In other big news, the IHSA Board of Directors approved state tournaments for all spring sports, which include baseball, softball, girls soccer and more.

Fontanetta, who also sits on the IHSA board, said spring sports were given priority since they lost their entire seasons in 2020.

“I am thrilled,” Fontanetta said. “This has really been the goal all along, to get a full state series for spring sports. We’re really excited about it. I think it’s great for the kids. Obviously last year they weren’t able to participate in a state series.

Two spring sports — boys volleyball and lacrosse — were approved under the condition that the state’s COVID-19 mitigations are eased by June, when the state series would begin.

Fontanetta said conditions are headed “in the right direction” to allow for both sports to compete in IHSA postseasons.