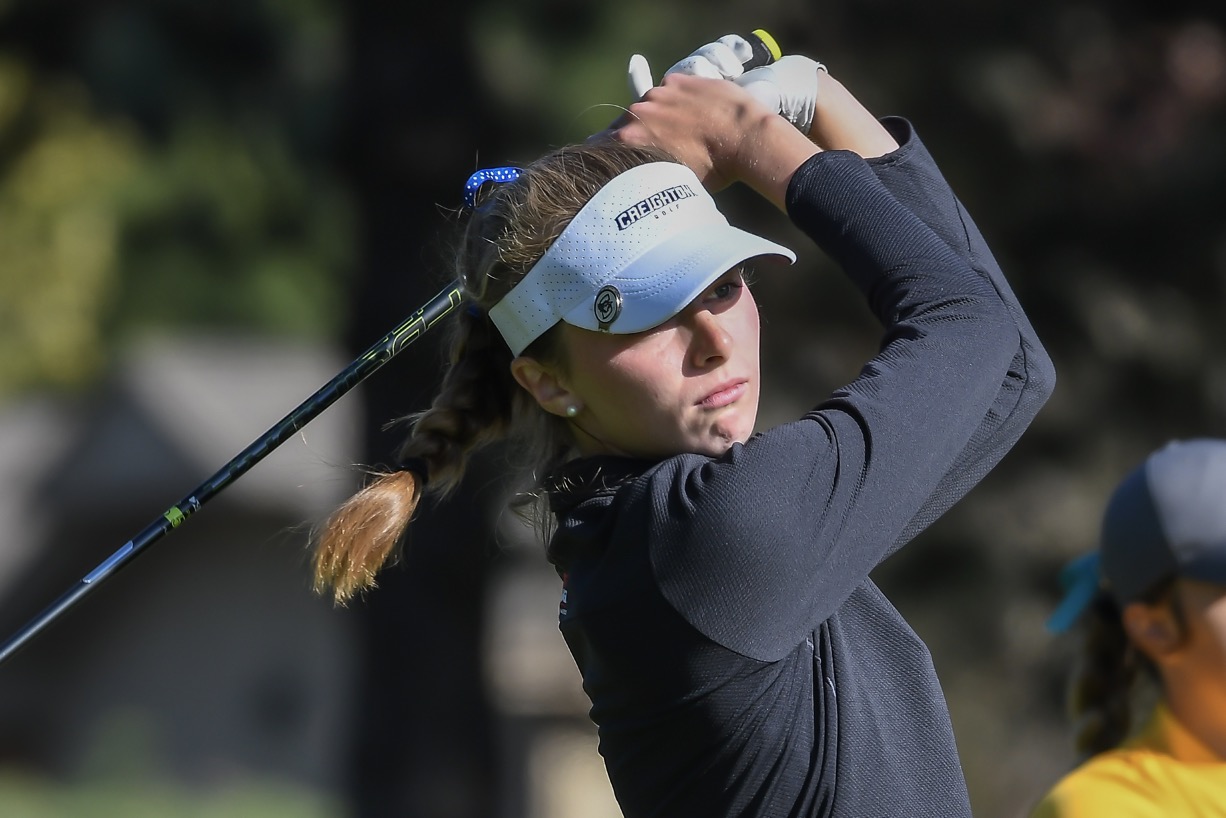 Margaret Hickey, a graduate of Wilmette's Loyola Academy, tees off in 2020. | Photo by Steven Branscombe

Margaret Hickey can’t forget the moment she thought her competitive golf career was over.

In the spring of 2020, the Creighton University junior and Loyola Academy alumna was sitting in Las Vegas’ McCarran International Airport after a tournament and absorbing what was happening.

The NCAA was canceling tournaments. Creighton was sending its students home for an extended spring break, which turned into a break for the school year.

So there Hickey sat, in the airport, with a lot of questions and few if any answers.

“It was just weird hitting at the end of my junior year because there was the question of whether I would play at all my senior year, whether or not it finished before I knew it was over,” she said.

Almost exactly a year later, Hickey, now a senior, is heading back to that same airport; though, with a different feeling.

After a year where she and college athletes around the country battled uncertainty, Hickey has more answers this time.

She’s ready to compete one last time in the sport she thought she lost.

Back to the basics

The Northwestern University first baseman played in seven of his team’s 13 games in 2020 before the NCAA canceled the rest of the spring season.

He worked out in his friend’s garage since local gyms and Northwestern’s athletic facilities were closed. They put a barbell between two garbage cans and started doing squats and other exercises.

Calarco also played in a summer league, getting valuable at-bats that not many teammates could find.

“It might’ve been a blessing in disguise in the long run where I was able to improve my game and get bigger and stronger,” Calarco said. “It stunk to have the season end but I was also able to improve on some things.”

Logan Weaver went back to the basics when he came home.

The Northwestern men’s soccer player walked down to a local park and started dribbling and shooting on goal.

A star at New Trier and a steady contributor with the Wildcats, Weaver slowed the game down and refound what drew him to the game in the first place.

“That was a breath of fresh air for me,” he said, “to fall in love with the sport again and understand why I love doing this here at Northwestern.”

Calarco hopes to show off his growth when his team’s season now just underway.

While he’s grateful to have grown over the past year in a way he didn’t think was possible, even in a normal year, he’s been counting down the days until he could get back on the field.

“Whenever you have something taken away from you, it really makes you appreciate how fortunate you are to be able to play,” Calarco said. “I’m just so excited to get out there. … It’s just eating at me to get out there on the field and get playing.”

Staying in the game

Finding a way to fit golf into her schedule wasn’t easy.

With a summer internship, Hickey needed to figure out a way to stay in the swing of things.

Since her internship was virtual, Hickey went over to the local driving range during her lunch break and again after the work day was done.

With all women tournaments canceled in Illinois, Hickey needed to practice more than ever before.

“It was definitely pretty heartbreaking,” Hickey said. “Even though tournaments were canceled this summer and I was working, I was practicing more than I would in general.”

Hickey started losing motivation when the fall portion of her year was canceled, something Weaver had to battle too.

Weaver and his teammates spent the summer working toward a fall season that was eventually postponed.

So, again, Weaver and company went back to work, hoping for a season at some point this school year.

The finally got one.

“Part of the reason why we’re so excited for what’s ahead is how postponed it’s been and how much work we’ve put in to this point, not even knowing for certain that we would get here,” Weaver said. “It not only took hard work, but also faith that there are going to be teams that slow down, and we’re not going to be one of them.”

Hickey and her teammates kept competing in the fall.

Working on on the driving range is one thing, but collegiate golfers need competition to be prepared for regular-season tournaments. Hickey and her teammates competed for positioning in the fall because they would’t have time during the unpredictable late winter in Nebraska.

The past year has been challenging for all, but Hickey said she’s picked up lessons along the way.

“It’s just kind of weird that my fourth year of college golf, I’ve had a full year taken away from it,” Hickey said. “I think it’s made me appreciate more getting back to it and the time that I have had.”

The Wagner College softball player watched her teammates practice with the energy of a new season after having last season end after nine games.

“You could see from the first practices that everyone was so energized to be at practice,” the Loyola Academy alumna said. “Everyone was talking to each other, loving being there as a team.”

But there were differences in order to make this season work. Players wore masks kept their distance from each other. The school tested all of its students.

There has been open dialogue among the team about the possibilities — positive and negative — of the 2021 season.

Wagner’s first two games were canceled. But there is a season, and that’s what matters.

“Mentally, I think our whole team is pretty much in the same mindset that it doesn’t matter, we get to play,” Conway said.

Brynn Holohan has seen cancelations, too, as she and her Arizona State women’s lacrosse teammates try to play and keep each other safe.

Following a freshman season that was canceled after eight games, Holohan has routine back in her life. All of the athletic amenities are open, players practice and lift weights.

Holohan and her teammates know they can only control what they do and trust their opponents are also following COVID-related protocols.

That’s why she’s not taking any day for granted.

“Just being really happy to be back but also taking it one day at a time, not getting too ahead of ourselves,” Holohan said. “We know that it can be taken away from us at any time, so we’re just making each day great.”

Back where it started

Margaret Hickey said it will be sentimental and strange when she goes back to Las Vegas.

After a long offseason of coming to grips with her doubt, she’s heading back to where all those doubts started.

Hickey knows this season won’t be anything close to usual. There won’t be a tour of the Hoover Dam or walk down the Vegas Strip. She can’t eat at restaurants with her teammates after a round and she’ll be sitting next to the same person all season.

But a year of enduring a global crisis has a way of putting things in perspective.

“I can’t even express how excited I am and grateful,” Hickey said. “Having an entire year off has enhanced how grateful I am to go out and compete.”