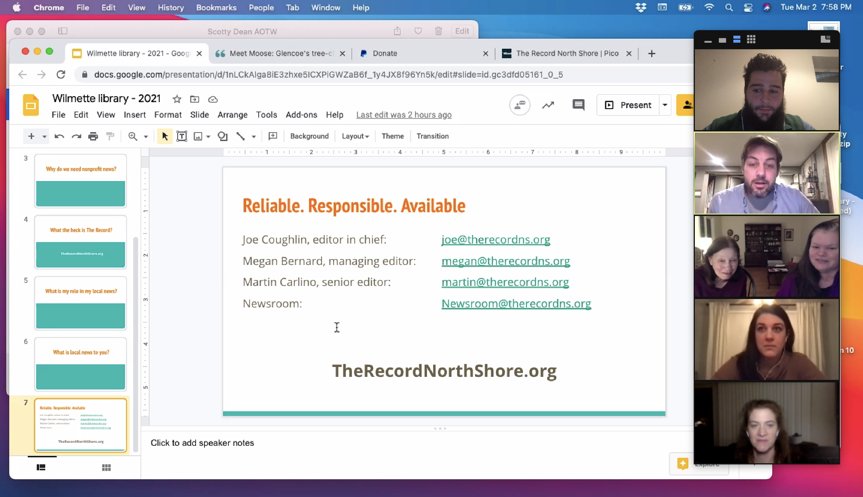 Joe Coughlin, The Record's editor in chief, concludes a presentation Tuesday, March 2, during a community conversation on the value of reliable local news.

More than a dozen community members joined The Record’s editorial team Tuesday, March 2, for a conversation on the importance of responsible local journalism.

Hosted by the Wilmette Public Library, the virtual event covered a variety of topics related to local news including the purpose and value of nonprofit outlets and their role in informing and working with the residents they serve.

“We had a great night talking with Wilmette residents about local news and what they expect from it,” said editor in chief Joe Coughlin, who hosted the event with co-founders Megan Bernard and Martin Carlino.

“Reaching out to and hearing from the community is important to us and can only strengthen The Record. We thank the library for partnering with us and the residents who came out and participated.”

Following a short presentation from The Record, attendees asked the trio a series of questions related to their current coverage of New Trier Township and plans to further enhance their comprehensive hyperlocal reporting.

The community-based discussion was the first in a series of virtual conversations The Record’s editorial team will host throughout its coverage area this month.

A similar event is planned in partnership with the Winnetka-Northfield Public Library from 7-8 p.m. on Monday, March 29. Registration is open and is required.

A goal of the discussions is to connect residents to the local news that serves them.

“We are looking forward to hearing from Winnetkans in a couple weeks as we continue to work with the community to form community news that is impactful and representative,” Coughlin said.

The Record North Shore is a nonprofit newsroom dedicated to producing credible, courageous, community-first journalism. Since its inception in mid-2020 and the subsequent launch of its news website, The Record’s editorial team has published more than 325 stories devoted to New Trier Township communities.

Coughlin, Bernard and Carlino co-founded the hyperlocal news organization after the closure of 22nd Century Media and its 14 suburban newspapers, which included The Wilmette Beacon, Winnetka Current and Glencoe Anchor.

Those interested in supporting The Record’s efforts can do so through subscriptions and donations.