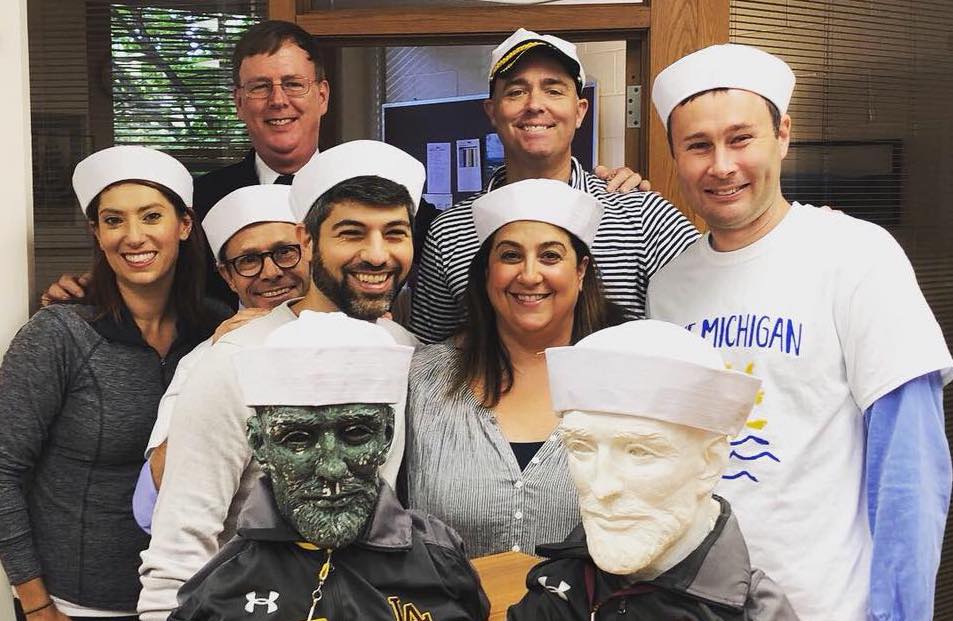 “The glory of God is man fully alive,” said the second-century theologian St. Irenaeus. One such man was Kevin Warnke, said Loyola Academy President the Rev. Patrick McGrath, who eulogized the beloved science teacher during a recent live-streamed prayer service.

Warnke — who since arriving at Loyola in 2015 taught physics, AP physics, digital electronics and introduction to robotics — died Feb. 8 at age 61 after a brave but intense battle with cancer.

A visitation will be held from 5-8 p.m. Friday, Feb. 19, at Wenban Funeral Home, 320 Vine Ave., Lake Forest. Fifty people will be allowed in the funeral home at a time; a mask and social distancing will be required.

“Kevin was a wonderful human being. He had a loud, boisterous zest for teaching science and this inspired his students every day,” she said. “Every life experience was a learning experience for Kevin, and he always had a goofy or adventurous story to share — this quality is what I will miss the most.”

Cervantes continued by describing Warnke as “a funny, kind and wise man,” who was a wealth of knowledge.

He served for six years on active duty in the Navy, where he served as a surface warfare officer. He then spent 21 years in the Navy Reserve before retiring as a captain, and enjoyed a successful career with Abbott Laboratories, where he was part of a team that received a number of patents for medical equipment.

Warnke then decided it was time to become a teacher.

In fact, it was a natural transition, said his family in their description of him to Wenban Funeral Home: “A true Renaissance man, Kevin was a PhD scientist who was devoutly Catholic, inquisitive rather than dogmatic; a retired Navy Captain with a passion for opera and esoteric literature; always witty but prone to come up with the lamest, groan-inspiring puns and jokes; and an endless fount of information on the widest range of topics. He was always a teacher.”

During the prayer service, McGrath expanded on that later-in-life calling:

Across social media, similar feelings of affection were returned.

Among the dozens of postings on Twitter and Facebook, many were from the parents of present and former students.

“I loved listening to him teach when my daughter was at home. His energy and love for physics and teaching could be heard during the class,” Angela Pancorvo Banaskek said.

“All three of my kids had him for physics and they all loved him. He was wonderful and cared about their success,” Karen Fogarty said.

Students also chimed in, like Taylor Zipparro, who said “Mr. Warnke made my time at Loyola Academy memorable and he always cared about his students and their well being.”

In Warnke’s final days, Anne told Father McGrath that her husband was really “disappointed and frustrated” that he couldn’t finish the job of teaching this semester.

“He was a good Navy man – you always complete the mission, you always finish the task – and it bothered him greatly that his declining health wouldn’t allow that,” she added to McGrath.

Memorial contributions for scholarship funds in loving memory of Kevin may be sent to Loyola Academy and/or to St. Thomas Aquinas High School in Dover, N.H.

The Record is a nonprofit, reader-funded news site. Our public-service journalism, including community tributes, is free for all to read.