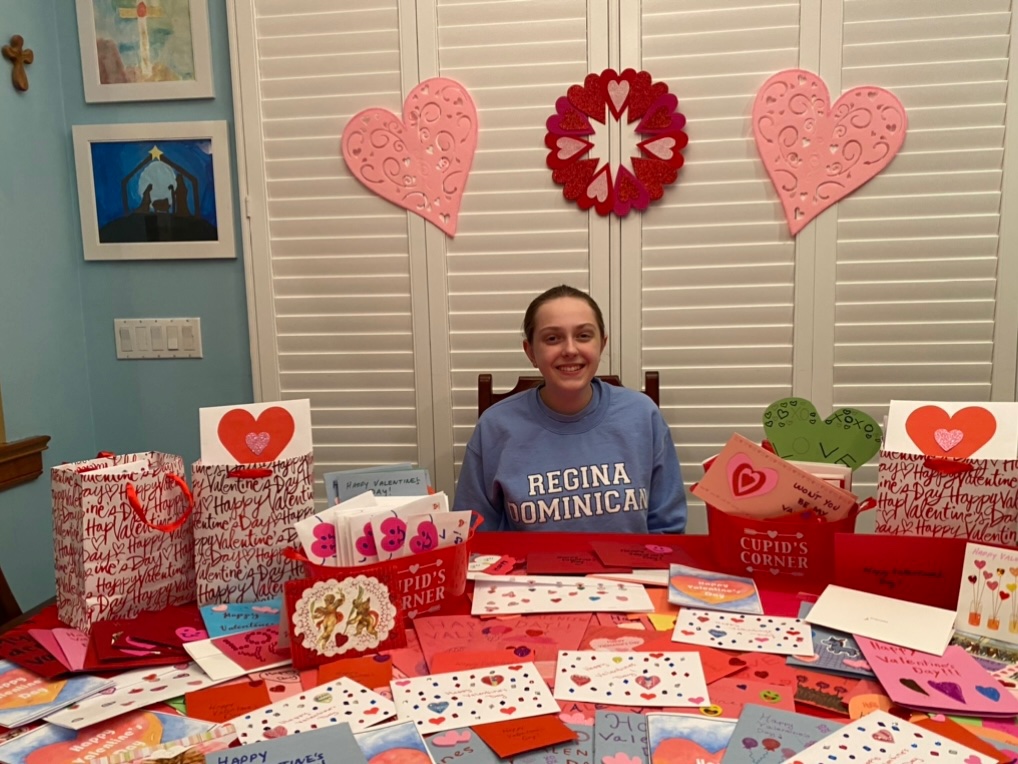 In a calendar year that has brought much despair, Regina Dominican freshman Katherine Schuenzel is doing what she can to spread love and joy.

The Glenview resident warmed the hearts of many by collecting more than 600 Valentine’s Day cards that she hand delivered to residents at several local assisted-living facilities.

“I used to do a similar project when I was a Girl Scout and I thought that it would be perfect to cheer the elderly up during this really difficult time,” said Katherine, who added that she thought it was especially important to give back to the community during “this time when we all need to come together.”

Katherine and her younger sister, Kourtney, made approximately 100 of the cards themselves. Then they collected another 500 from their friends and neighbors.

Locals of all ages, from young to old, participated in the project by making and decorating their own cards to contribute to the collection.

One participant informed a family member of the project, who then mailed 54 Papyrus cards once they got word of Katherine’s efforts.

“There was a really great response and people were excited because they wanted to partake in it,” Katherine said. “We also posted on Nextdoor so that more people could participate.”

Once all the cards were decorated and collected, a process that Katherine said took about two weeks, the family dropped them off at Glenview Terrace, Glenview Citadel and The Abbington. They also delivered cards at St. James in Chicago, which has ties to their parish, Our Lady of Perpetual Help.

The Valentine’s Day cards were met with a warm reception and helped put smiles on countless faces.

“It filled my heart with joy and happiness knowing how much love and care you have towards our residents,” reads a letter from Jollamma Abraham, the activity director at Glenview Terrace. “We really appreciate it. There are no words to express our gratitude to the Glenview community.

Katherine’s mother, Karen, is thankful for the support from the Glenview community throughout the project.

“The community just made a really nice effort to support these residents,” she said. “ … I’m very proud of Katherine and I’m also just (thankful) to live in such a kind community where people actually took time out to do this project. You could tell that people really put their time and effort into it, which was very nice.”

Katherine hopes to work on similar projects in the future, she said, adding that she may want to also collect cards for Christmas or Easter. But for now, she’s happy to make a difference by delivering some joy and fulfilling her service hours with a meaningful project.

“I thought that this would be beneficial for the community to help cheer some people up that maybe weren’t as happy during the pandemic because they weren’t able to see their family,” she said.