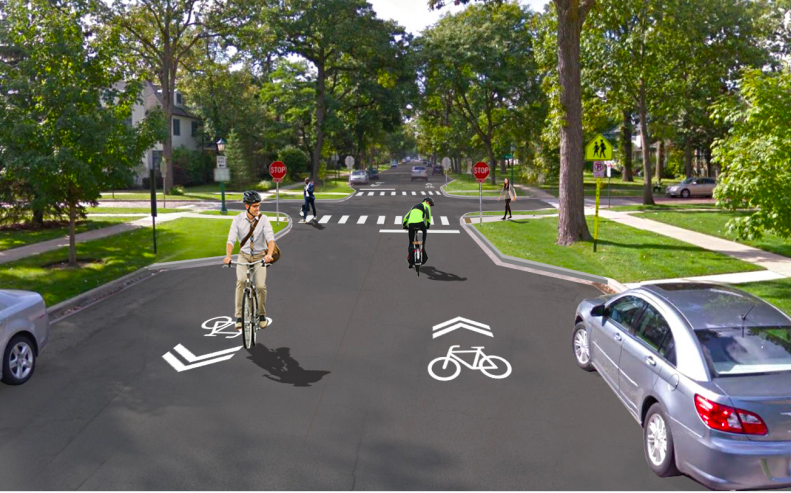 A rendering of a possible result under the plan, showing shared planes for Greenleaf Avenue. | Courtesy of WalkBikeWilmette.com

A nearly three-year study into the development of a villagewide master plan for bicyclists and walkers was presented to the Wilmette Village Board at its regular meeting Tuesday, Feb. 9.

The Master Bike and Active Transportation Plan’s goal is to make Wilmette a more bike- and pedestrian-friendly community by developing a sustainable transportation network.

“Building a multi-modal transportation network in an urbanized, established community like Wilmette is very challenging,” said Brigitte Berger-Raisch, the village’s director of engineering and public works. “But we believe that the final plan strikes the right balance between providing a safe and inviting network while also being sensitive to traffic needs on street parking and protecting the village’s urban canopy.”

Gina Kennedy was the only trustee not present, as Board President Bob Bielinski stressed the plan is preliminary.

Berger-Raisch also mentioned that some items in the plan – including bike accommodations on Lake Avenue and a pedestrian crossing across the Edens Expressway on Lawler Avenue – still need more study after neighbors submitted their concerns with both ideas.

Specific concerns, however, were not discussed at Tuesday’s presentation.

The board is set to vote on the plan at its Feb. 23 meeting.

Overall, the plan calls for a bike-trail network throughout the village, with connected paths and a link to the Skokie Valley Trail.

The plan also recommends “bike boulevards,” which show bicyclists where to find the lowest-traffic streets via signage and use street markings to slow vehicle traffic.

Shared lanes are also part of the plan, as are sidewalk and intersection improvements.

“The idea here was to find ways to connect everyone in the community so they would be near a bike facility so they could get east, west, north, south, and connect to key destinations,” Berger-Raisch said.

Following a question on implementation, Berger-Raisch said that should the trustees approve the plan, there is still a lot of work to do.

“And the first thing that we’re going to do is, in conjunction with our development of the five-year capital improvement program, we are going to take a look at all of our planned road projects, sewer projects, water projects, and then overlay the recommendations for bike and (pedestrian) improvements to see where they intersect, so we can include that in our five-year CIP,” she said.

Further, she added, the village staff will work with state and county officials, which have jurisdiction over some parts of the plan, to see where they can coordinate improvements, as well as seek grant opportunities.

Community feedback will also continue to be solicited.

Trustee Peter Barrow, an avid cyclist, said he and his cyclist friends are in support of the master plan.

“The friends of mine that have spoken about it have questioned one part or another part, but I don’t think our purpose tonight is to go that deep into the woods,” he said. “I think there’ll be plenty of time to talk about whether a particular street should be this or should be that. But I certainly support it and I think that my friends that are active cyclists do also.”

Trustee Dan Sullivan, who serves on the village’s Municipal Services Committee, said he appreciates all the work that has gone into the plan’s development.

“This is a concept and it took a lot of work and a number of people’s efforts, both employees, board members and our residents,” he said. “And I want to commend that staff for leading us to this point, as well as our consultants.”

Bielinski added the plan provides a framework for future decision-making.

“On [Feb.] 23rd, we’re not going to be voting to approve this improvement on this block or this change to this neighborhood,” he said. “The plan is not final; it’s not permanent. But it creates a framework to assist in our future decision-making. When we’re addressing improvements to our infrastructure and our neighborhood, the plan prompts us to take into account transportation-type improvements we can make and include in part of the project.

“It’s necessary for us to complete this plan, otherwise we’d be making decisions in a vacuum and without any sort of perspective on a villagewide impact or larger context. It’s really great that we’ve got it to this point.”

The full plan can be found online at walkbikewilmette.com.