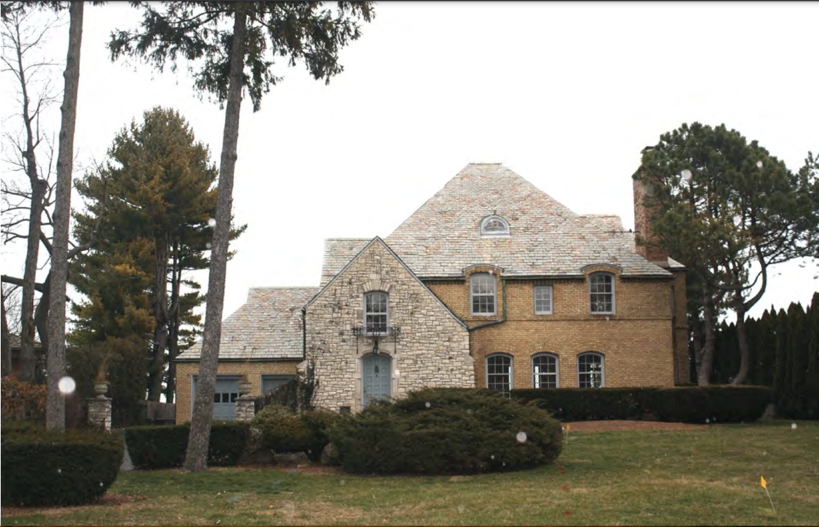 Homes at 203 and 205 Sheridan Road will soon be demolished as plan to construct a large-scale single-family home along Winnetka's lakefront are coming to fruition. | Photo courtesy of the Village of Winnetka.

Two lakefront properties along one of the North Shore’s signature roads will soon be razed to construct a large home across a prominent area of Winnetka.

Winnetka’s Landmark Preservation Commission ruled Feb. 1 that 203 and 205 Sheridan Road can be demolished without delay, setting the stage for an unnamed applicant’s massive project to build a new single-family home along the lakefront.

According to documents submitted to the Village of Winnetka, the homes at 203-209 Sheridan Road and the portion of Centennial Beach are owned by a single entity. The 209 Sheridan lot is currently vacant, according to village records.

The landowner’s identity is not publicly known and is kept private through a series of transactions completed under two private trusts. The Record’s previous attempts to identify the owner were unsuccessful.

Ownership of the continuous stretch of land along Sheridan, totaling more than 140,000 square feet, is made possible by a land-swap agreement between the Winnetka Park District and the ownership group of the properties.

That deal, previously reported by The Record, involves the park district acquiring 261 Sheridan in exchange for the portion of Centennial Beach. Doing so has long been a goal of the park district’s, officials said, and will allow it to create nearly 1,000 feet of continuous public beach by combining Elder and Centennial beaches.

The acquisition of the land along Sheridan cost the ownership group nearly $24 million, according to property records. The home at 203 Sheridan was sold in October of 2020 for $9.5 million, while the one at 205 sold for $8.2 earlier in the year, property records show.

Village documents show the value of the property that the park district is acquiring is $6.2 million. The property it exchanged is valued at approximately $3 million.

Winnetka’s Plan Commission approved a plan in mid-December to combine the 3.3 acres along Sheridan into one subdivision lot. The Village Council is expected to hear the proposal that would make the construction of the new single-family home possible during its Feb. 16 meeting, officials said.

The Landmark Commission’s approval last week grants the property owner the ability to demolish the homes without a 60-day waiting period, which is usually necessary if a home carries village-designated historic significance.

Officials are placing an importance on the expedition of the project’s timeline because of the Winnetka Park District’s desire to begin shoreline protection work at the 261 Sheridan property it will be acquiring, officials said. The park cannot begin work until the land-swap agreement is official and it owns the property.

John Peterson, executive director of the Winnetka Park District, told the commission at its December 2020 meeting that the park district will respect whatever decision is made but that a months-long delay could lead to unintended consequences at Elder and Centennial.

“Time is of the essence in terms of moving this project forward and getting this deal closed … (as it) could damage the entire village because the construction project for the beachfront protection system may drag out until 2022,” said Cal Bernstein, a representative of the owner of the Sheridan road properties. “With these high lake levels, that could create some significant damage at the (bottom) of the parks down at the bluffs.”

Several members of the commission made it clear the importance of time in the project’s proceedings is the central reason a delay was not issued and that this ruling will not create precedent moving forward.

A usual motivating factor in the commission issuing a demolition delay is the hope that a deal can be arranged between parties to preserve the property, rather than tear it down. In this situation, officials believe a delay was not going to alter the fate of these homes.

An early estimate of the project’s timeline suggests a completion of approximately two years, according to documents submitted to the village. Demolition could begin this spring, if approval is granted.

The proposal has met opposition from nearby neighbors, several of whom addressed the commission in December expressing concerns that their views of the lake may be disrupted by the new home.

In late September, several residents questioned why the park district did not provide notice of the transaction sooner and urged all parties involved to consider their interests.

Berstein, after commissioners questioned whether the development will consider the neighbors and ensure their views be protected, said it’s “a little too early in the process to know at this point” and it’s “hard for us to quantify that right now.”

“This is a very complicated, complex transaction with the land-swap of 261 so there’s a lot of moving pieces here that we don’t normally have in a normal application so this application is unique.”