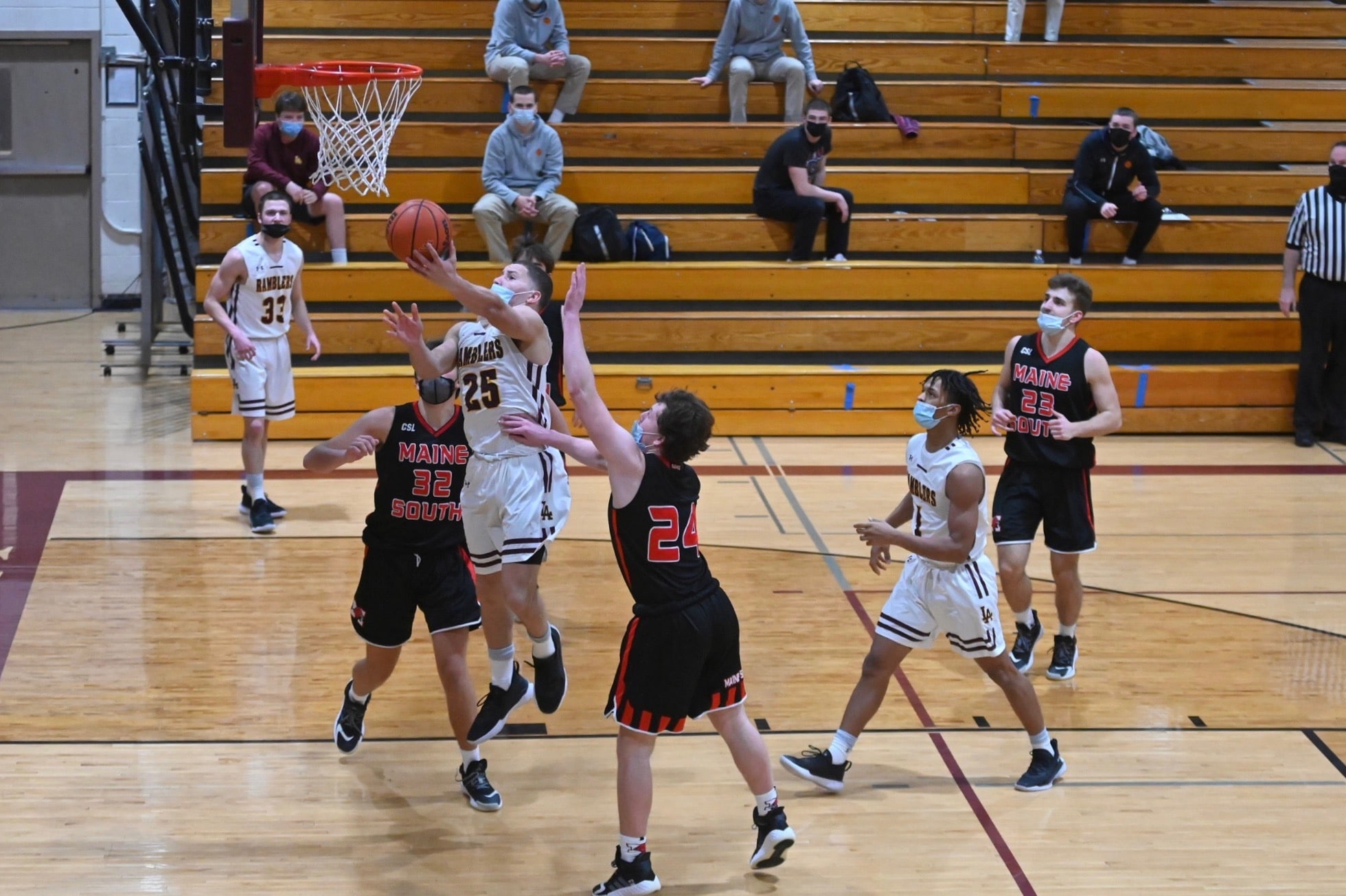 Loyola Academy has never had a season-opener quite like it did Friday night.

There were no fans and players didn’t huddle up. Bench players weren’t on the bench, but dotted the bleachers. Coaches not only yelled out directives for their players, but also reminders to stay 6 feet apart during player introductions.

There were even mask breaks each quarter.

But Ramblers head coach Tom Livatino never felt so happy after a loss, this one a 47-36 defeat on Feb. 5 at the hand of visiting Maine South.

In all its abnormality, it felt normal just to be playing high school basketball again.

“I thought the game was absolutely fantastic,” Livatino said. “It was so great to play a high school basketball game, compete, play against a great team like Maine South, which we have had nothing but tremendous respect for. The best part about it was it was normal in an abnormal time.”

The teams traded punches in the first quarter as players adjusted to competing in a live game this season.

Maine South ran out to a 4-0 start before Loyola responded by scoring eight points of its own, and each team committed eight turnovers in the first quarter.

The Ramblers built on their 11-8 first-quarter lead early when Scotty Dean and Tommy Zipprich each drained a 3-pointer to give Loyola a 17-12 second-quarter lead.

Maine South battled back to make it 19-18 at the half before taking control of the contest in the second half.

Maine South’s Sean Gallery fueled the Hawks’ second-half surge with seven straight points and 11 points in the third period as the Ramblers went on a six-minute scoring drought.

The Hawks out-scored Loyola 22-9 in the third, and the Ramblers never trailed by fewer than nine points once the fourth quarter started.

Gallery led the way for both teams with 17 points while Loyola senior Jalen Axibal had 10 and Dean added nine.

The Ramblers turned the ball 11 times as they tried to replace last season’s historic team with a new lineup.

“An inexperienced team lost to an experienced team, that’s what happened,” Livatino said. “We turned the ball over, we didn’t do some stuff the way that we do, but all credit to Maine South.”

Livatino and the Ramblers won’t have much time to work out the kinks as the team tries to play 23 games in a condensed schedule that ends in mid-March.

The head coach wanted to get his players as many games as possible. He feels they deserve it.

Loyola will play four games in a week after its loss to Maine South, and Livatino promised his players will figure it out as the season progresses.

For now, Livatino can’t get rid of the smile on his face. His team is finally playing basketball again, and it feels like it should.

“It’s all about that we got an opportunity to play,” Livatino said. “I will never feel better in a loss than I am right now.