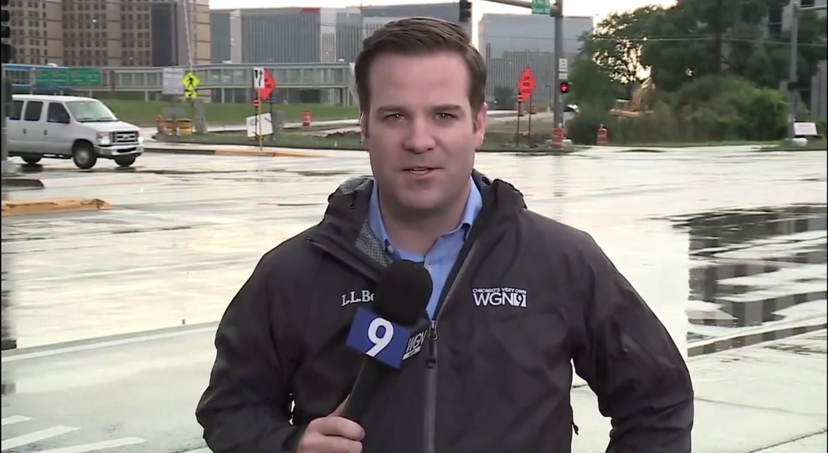 WGN Morning News anchor Dan Ponce threw down the gauntlet. Reporter Mike Lowe picked it up and slapped him with it.

Ponce, who is a Glencoe resident, then dared veteran WGN reporter Lowe to top it.

“He challenged me to do it,” said Lowe, a North Shore native, Loyola Academy graduate, and winner of a near-record 27 Chicago/Midwest Emmy Awards. “He said, ‘The ball’s in your court. … You won all these Emmys, but can you do this?’”

That evening, Lowe and his team took 15 minutes to put together a 54-second traffic report, and it played on the Friday morning news show. Sorry, Ponce. Game, set, match.

Lowe first gave the report in English, Spanish, French, German and Latin. The Latin he knew because his father, Dr. William H. Lowe, is a longtime Latin teacher at Loyola. The German he learned while doing a postgraduate fellowship with the government broadcasting network in Berlin for more than a year. And, the French and Spanish he got from Google Translate.

Then came the sixth language, spelled out on screen as “Chicagoese.”

That was the pièce de résistance, delivered with perfect elocution and diction, Chicago style.

There were lots of broad “a’s,” “da’s,” and “Chicagoese” word slang classics like “sammiches,” “frunchrooms,” “da Jewels” and “gratchkis,” all delivered with a deadpan traffic report seriousness.

To get the full effect of Lowe’s report, imagine Bill Swerski of “Da Bears” fame in the old “Saturday Night Live” skits delivering it. Lowe was every bit as on target. Here is the report:

“Good morning. It’s raining and traffic is slow but lemme tell you what actually happened. My friend Mary Pat went to da Jewels to pick up some rolls for the knockwurst she was gonna have later. Anyway, she got onto the Edens and ran into a big traffic jam because there was a gapers delay so by the time she got home she couldn’t find her gratchki and had to park over by da front. Anyway, the neighbor had dibs and set up the ironing board and a beach chair so she had to park over by da parking meters — you can thank Daley for that one — but anyway she got into the frunchroom, went straight to da fridge. She was outta pop. She was outta knockwurst. So she just made herself a sammich, grabbed an Old Style and watched da Bears’ playoff game and of course they lost.”

Rex Chapman, a former pro basketball player and social-media influencer with more than 1.5 million Twitter followers, picked up on it and tweeted “Somebody give Mike Lowe his own show.”

Darrell Rovell, a sports business analyst with The Action Network who teamed with Lowe on a WNUR radio show in 1999, also tweeted it out to his 2 million Twitter followers.

“It just kept going from there,” Lowe told The Record. “I really don’t know how many people have seen it, but I know my uncle in Detroit did.”

No, it’s not a type of blood sausage. It’s “garage keys.”

“That’s one of the greatest words I’ve ever seen,” said one Twitter user.

Lowe was pleasantly surprised by the reaction.

“You do these big investigations or you uncover corruption or those kinds of thing in your work but it is something like this that captures people’s attention,” Lowe said. “I guess it just goes to show that we are in a time right now where people need to smile. It brightens their day, if only for a few minutes.”

Lowe has been a general assignment reporter for WGN since 2015, typically appearing on the news shows at 4, 5 and 6 p.m.

His typical day? There isn’t one.

“One day I could be interviewing the governor,” he said. “The next day I could be at the scene of a fire or a shooting or covering fans celebrating the Bears in the playoffs.”

What’s his most memorable assignment? That might have to be the week he spent last year covering the wildfires in Oregon.

“That was the craziest story I’ve ever done. It was almost like an other-worldly experience,” he said. “It didn’t even seem like you were on the planet Earth. The sky was yellow, the moon looked like the sun, you couldn’t breathe. It was crazy.”

Lowe, 41, currently lives in Chicago. He grew up in Evanston and was a member of the Class of 1997 at Loyola Academy in Wilmette, where he played football and was on the wrestling and track teams.

He then attended Northwestern University, where as an undergraduate he was a double-major in political science and journalism. He also earned a master’s degree from Northwestern’s Medill School of Journalism, where he won the Harrington Award, the school’s top student honor.

As a kid, Lowe used to bike with his pals over to Dyche Stadium and sneak in to watch Wildcats football. When he went school there, he became sports director of WNUR-FM and did play-by-play of their football and basketball games. He was also an intern with WGN Sports department from 1998 to 1999.

After stops as a general assignment reporter for WLNS-TV in Lansing, Mich., a fellow in Germany, and as bureau chief of WFMZ-TV in Allentown, Penn., he spent an eventful seven years from 2008-2015 with WITI-TV in Milwaukee, Wis.

At one point, he said, “I had a striped tie and a deep voice and they said ‘You’re a political reporter.’”

That meant he spent a lot of time at the state capitol in Madison covering embattled Gov. Scott Walker, following the rise of the Tea Party, and keeping tabs on local Congressmen Paul Ryan and Reince Priebus.

“All of these really important figures were emerging at that time,” he said.

To be sure, Lowe is proud of the fact that he is a four-time regional Edward R. Murrow award winner, a National Mark of Excellence (SPJ) award winner and a national Walter Cronkite Award for Political Journalism winner.

And, of course, there are those 87 Emmy nominations and 27 Emmy wins, which he is well aware happen to be just three short of the legendary Bill Kurtis’ mark.

“That would be a really cool goal to achieve,” he said.

But it’s not the awards that motivate Lowe; it’s the news game.

“You have no idea what you are doing at 11 a.m. and by 5 p.m. you are the voice of authority on some subject,” he said. “You just treat every story like, ‘Hey, let’s do the best possible job we can.’ It’s a team game. There’s a photographer and a producer, and you are all working toward this goal and is something that is very satisfactory.”

Now back in Chicago for seven years, he can’t imagine being anywhere else.

“There is something special about this city,” he said. “We have all these tag lines about Chicago. ‘The city of broad shoulders,’ that kind of thing. But I think the guiding principle of Chicago is that we have a sense of humor. We like to think we are tough but we also have a soft spot.”

And the answer is an emphatic “yes,” when asked if he plans on sticking around.

“I honestly think if you are working in local news, there is no station like WGN anywhere in the country,” he added. “Not only because it’s an independent, and our whole mission is to be Chicago’s station … but because of the history of the people who worked there. People have such fond memories of watching the Cubs and Harry Caray, and watching the Bozo show for all those years, and Tom Skilling with the weather. It is almost as perfect a reflection of the city as you can get.”

And don’t count Mike Lowe as one of those TV guys who wants in their heart of hearts to move on to New York or L.A.

“For me,” he said, “being in Chicago is the highest you can get and WGN is the only place you would want to work if you are a true real Chicagoan.”

Underclassmen Nimesheim, Fitzgerald step up as Loyola rambles to 8-0

By Staff | 9 hours ago
Northfield, Sports

By Martin Carlino | 10 hours ago

Underclassmen Nimesheim, Fitzgerald step up as Loyola rambles to 8-0

By Neil Milbert | 4 hours ago