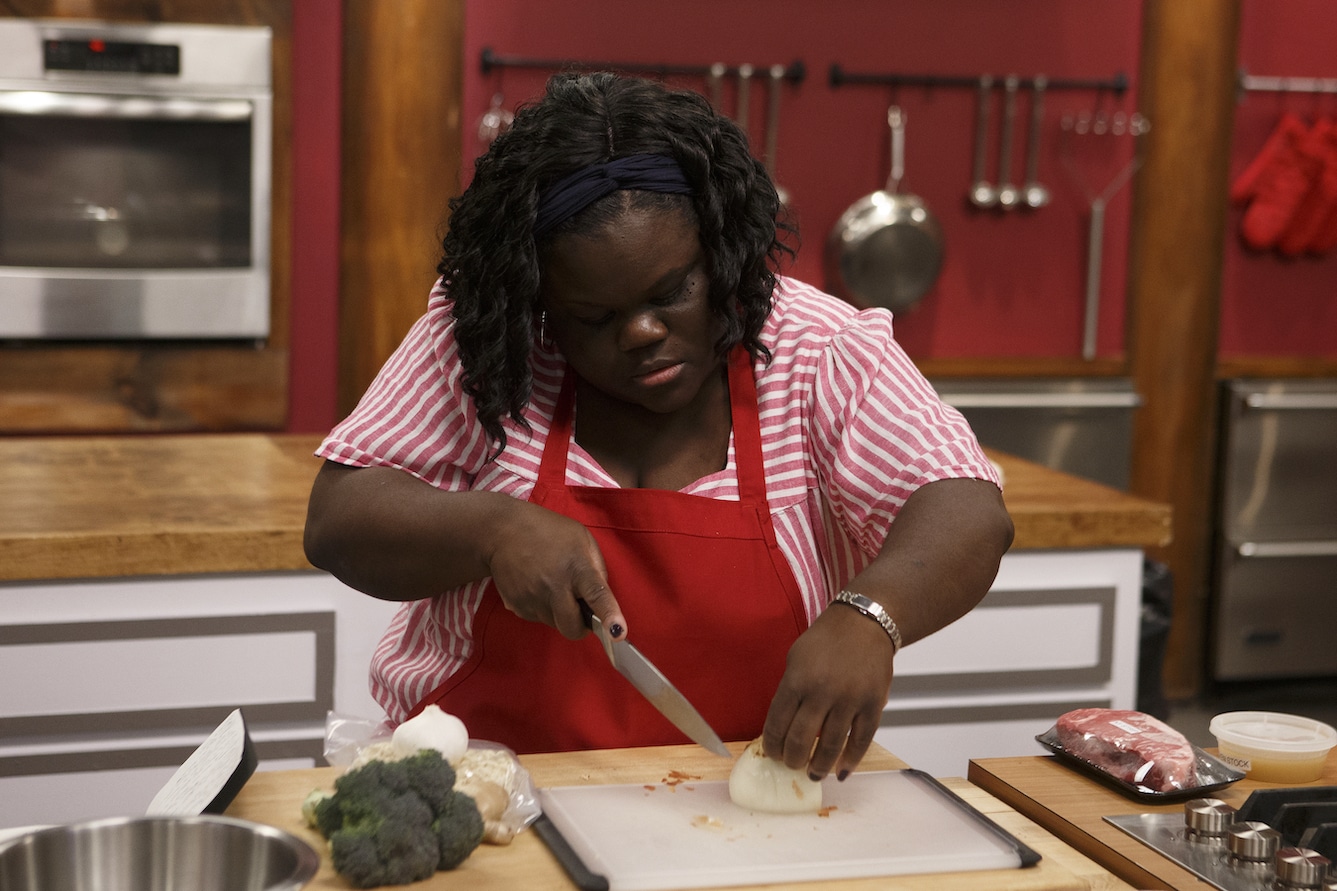 Kenilworth Post Office clerk Stephanie James cooked up a batch of her special spaghetti and meat sauce for a family gathering last summer and was embarrassed when she went to leave the party that no one had eaten it.

“I guess the sauce had no flavor and the meat was burnt,” she said. “Everybody in my family can cook. I didn’t get that gift.”

Well, that may be about to change.

James is one of 14 contestants competing in the 21st season of the Food Networks’ popular series “Worst Cooks in America,” which premiered Sunday, Jan. 3.

Chefs Carla Hall and Anne Burrell will be doing their best to transform their team of kitchen disasters into culinary masters by putting them through a rigorous kitchen boot camp. The recruits on each team with the worst dishes each week are sent home and the rest advance to the next week.

In the series finale on Feb. 28, the two recruits who makes the most impressive culinary transformation with their newly acquired skills will face the challenge of cooking a restaurant-quality three-course meal for three food critics. The one winner, selected in a blind taste test, pockets $25,000 and bragging rights for their team mentor.

James filled out an application to be on the show “because first and foremost I am a fan,” she said.

“I want to learn some skills and I felt like this was the show that could teach me,” she added, “but never in a million years did I think I would be selected.”

She received a callback saying she was in the running, then was interviewed on the phone.

“The person said to me ‘I like your energy’ and ‘You are hilarious.’ I said, ‘I’m not even trying. I was just being me,'” she said. “He said ‘Whatever I’ve got to do, I’m going to try to get you on this show.’ That was so nice. I am always the underdog, and unseen, and for somebody to see something in me, that was really touching.”

Now that she’s on, James hopes the experience will help turn a weakness into a strength.

“I aspire to be a good cook, but it’s never really worked out. I set out to do cooking, and sometimes, oftentimes, every time I am conquered by it,” she said. “I want to learn how to cook from scratch. I want be able to open the refrigerator and see what I have, whip something up, and it be delicious. And I want to cook a big meal for my family.”

James lives with her mother and 13-year-old son in Edgewater, and right now her go-tos are pre-made pizza and hot dogs. Her son “thinks I am the worst cook in America,” she said.

“He is positive, like ‘You can do it mom,’ but then, when I go in the kitchen and do any cooking, it’s ‘Oh, you’re going to cook?’ He prefers my mother to cook.”

James is hoping that will change.

She’s got another thought on her mind, too.

The season was taped late last year in New York, and guests were put up in a hotel. She made the cut in the opening segment, but there were culinary difficulties.

As a member of chef Anne Burrell’s team, one task was to make lasagna from scratch, including the pasta.

“I think I got the flavor part right but I wasn’t sure if I was supposed to boil the pasta first or cook it with the lasagna sauce.”

She chose the latter option.

“Apparently that was not the right thing to do.”

She also had some issues with an onion.

James gave a sneak peek at next week’s episode and warned that her knife skills come under fire.

“Every week is intense,” she said. “Anne is like a hawk, looking over your shoulder at everything you are doing. And there is a clock and everything goes so fast.”

Even if the cooking thing doesn’t work out, James has other talents.

She recently won an “audience choice” award at the 26th Annual Black Harvest Film Festival, programmed through the Gene Siskel Film Center. And her first novel, “Remember Me,” is being shopped for a publisher.

And at least for the next few months, James will have a bit of celebrity buzz about her. In fact, she already does. Two days after the “Worst Cooks” show began airing, a customer walked into the post office, walked up to her, and said, “I have something for you.” She assumed it was a package the customer wanted to mail.

Nope. Instead, the woman placed a box of lasagna shells and an onion on the scales.