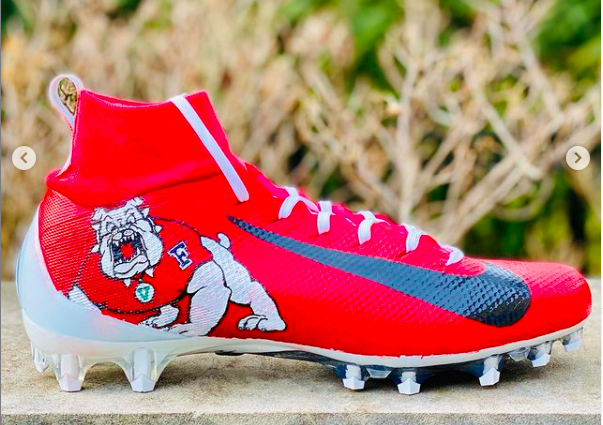 When the pandemic hit, and the ensuing shutdown, Wilmette’s Max Micek, 13, grabbed his shoes and went to work.

Just not in the way you’re thinking.

Back in May, a bored and restless Micek was scrolling through his Instagram feed when inspiration struck.

Micek gave it a shot.

“I did it out of boredom,” he said. “Little did I know it would become a full business.”

It did not take long for Micek’s work went to go from hobby to moneymaker. But it did take a little help.

In May, he signed up for a social media chat with one of his favorite players, Carolina Panthers defensive back Stantley Thomas-Oliver.

During the chat, Micek asked plenty of questions and got Thomas-Oliver’s attention. He talked about his new hobby and sent a photo of his first set of painted shoes: Spongebob-themed Vans.

“He said he liked them and if I could do cleats, we could do business,” Micek said.

Word of Micek’s talents spread and a handful of football talents in Florida were looking for a pair from Cuse_Customs, Micek’s new business, which was originally featured on WGN.

Thomas-Oliver opened the pipeline, but the foundation of Cuse_Customs — named for Syracuse University, where his parents both went to college — started at home in Wilmete.

Micek said none of it is possible without his father, Marc.

“When I was first starting out, I didn’t have an art background,” Micek said. “(Dad) was kinda teaching me how to draw and I’ve been improving my skills since then. He’s my biggest supporter through all this.”

Micek has made dozens of pairs of custom football cleats and sneakers. He’s even taken some holiday orders.

And the best part about doing business in the tech age is he can see his clients’ reactions.

“I’m enjoying it a lot actually,” he said. “I love painting them, I love communicating with clients. My favorite part is when they’re finished and I get to see the hard work paid off, them opening the box and seeing that reaction.

“It’s all about putting a smile on someone’s face, not about money.”

And it’s an added bonus that football is intertwined into Micek’s new venture.

Micek played last season with the Wilmette Catholic youth program, but this fall, the season was canceled, along with plenty of other organized activities.

Starting a business was a nice consolation prize, and who knows, maybe Micek found a new path.

“Before all this, football was my life. It was my favorite thing to do,” he said. “I had dreams of going (to a Division-I football program). If this customizing thing gets bigger and bigger, I might continue to do this.”