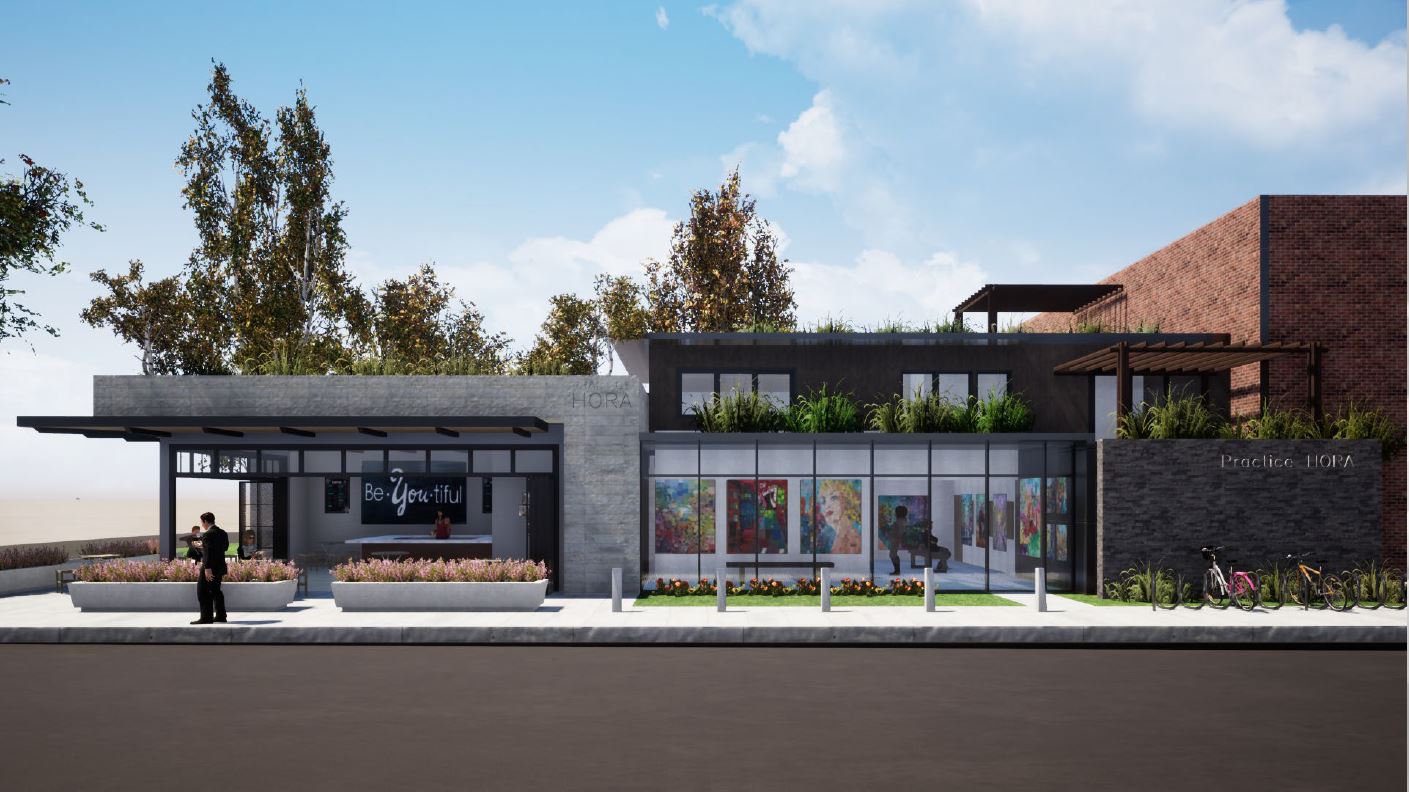 Kenilworth's Village Board is slated to hear a proposal for the repurposing of a building at 500-510 Green Bay Road that would bring in a fitness studio, art gallery and coffee shop. | Rendering courtesy of the Village of Kenilworth.

A new addition to Green Bay Road in Kenilworth is one step closer to becoming a reality.

Kenilworth’s Plan Commission recommended last week during its regular meeting approval of a special-use permit for a proposed three-in-one fitness studio at the northwest corner of Melrose Avenue and Green Bay Road, or 500-510 Green Bay.

Applicants Yevgeny Frolov, Svetlana Baklanova and Tanja Bechtler intend to open a fitness studio, art gallery and coffee shop on the first floor of the building, according to project plans submitted to the village.

Michael Freiburger, the architect for the applicants, previously told the village’s Architectural Review Commission that they are also proposing to renovate the existing building, add a 1,200-square-foot addition and complete other modifications at the site, village documents show.

Submitted plans call for the second floor of the building to be used as a residential unit.

The ownership team believes the building under its “new vision will engage and provide community interaction on multiple levels.”

The majority of the first-floor space would be dedicated to Practice Hora USA, which a press release from the village of Kenilworth describes as a fitness “studio which focuses on training of physical, emotional, and intellectual endurance through proprietary and physical exercise.”

In their application submitted to the village, Frolov, Baklanova and Bechtler say the company started in 2006 and moved to the Chicago area in 2009. It currently has a location at 3520 Lake Ave. in neighboring Wilmette.

Plans described the proposed coffee shop as “an alternative to national coffee chains.” According to the proposal, it will rotate local coffee brewers every three months.

The ownership team also hopes to showcase other local goods and local authors and restaurant owners for presentations and lectures on healthy food.

A portion of profits generated on selected items will go toward local and national charities, the proposal says.

Similar to the coffee shop, the proposed art gallery will feature rotating art and exhibits while also offering interactive events. The owners reportedly seek to cooperate with other local art galleries in nearby villages for seasonal gallery walks.

“Art gives unique identity and appreciation to the community,” the three applicants wrote in the proposal. “It brings interaction, education and inspiration.”

The gallery would run on more limited hours, running from 11 a.m.-6 p.m. Monday-Friday and noon-6 p.m. on weekends.

The proposal does not include a direct timeline for opening, but the applicants have previously stated at public meetings that they would like to begin as soon as possible.

Following approval from the plan commission, the proposal will now go in front of Kenilworth’s Village Board for final approval. The board is scheduled to consider the proposal at its January meeting.

The village’s planning and building department could not be reached for comment as of publication time.