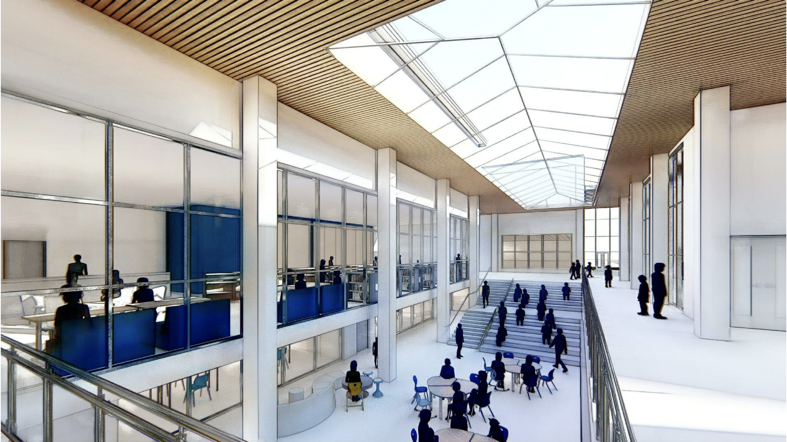 The Kenilworth District 38 Board of Education approved the district's master facilities plan Monday, Dec. 14. An aspect of the plan is a new student commons area. | Rendering courtesy of DLA Architects

The future of Kenilworth School District 38 is now in place.

More than 16 months of planning came to fruition during the board of education meeting on Monday, Dec. 14, when board members unanimously approved the district’s comprehensive master facilities plan.

The approval sets the foundation for the future of The Joseph Sears School at a projected cost of up to $25 million.

According to district documents detailing the plan, several additions and renovations will transform the school into a “modern, flexible, 21st Century, learning environment that will reflect the community nature of the school and support academic excellence” in students.

The directional plan outlines capital investments the school district will be using in the near future, officials said at the Dec. 14 meeting. While plans aren’t absolute, they will help guide decision-making in the coming years.

Officials believe they lay the groundwork for the largest capital investment in the school in decades.

“We hadn’t really had a major capital investment in the school, aside from maintenance capital expenditures, for really several decades,” said Steve Potter, board member and chairman of the building and finance committee. “And while the school is in great condition, with our goal of being the best JK-8 school in the country, we felt like we had to do some things to create an environment that would lead toward that.”

The district’s plan proposes several alterations to the existing school, which covers more than 100,000 square feet

One of the largest potential undertakings is a 13,000-square-foot addition to the building that would provide a new student commons area.

The plan describes the space as a “distinctive gathering zone within the school” that features a learning staircase and provides access to a lower-level science room and new lab.

Plans also call for the first floor to be renovated to contain a new, centrally located library technology center and new art spaces.

According to the document, these spaces are located along a “central spine that connects the existing entrance with a new community entrance, which will be located within an addition to the east” side of the building.

The development of collaborative learning spaces for both teachers and students throughout the entire school is also a priority of the plan.

The district’s plan also includes a multipurpose room and warming kitchen, which officials have described as a “cafe-nasium,” that will offer a space for lunch during the school day. It will also include a flexible physical fitness area that’ll be used as a recreational space during the afternoons and evenings, officials said.

An imperative aspect of the district’s future plans is expanded collaboration with the Kenilworth Park District.

Potter told The Record the cooperation was an important element that officials considered while crafting the plan, adding that the school district is fortunate to have an active and engaged park district in Kenilworth.

Plans for the new learning spaces were conceptualized with the park district to allow for easier collaboration between the two entities.

While the new spaces are primarily for use by the school district during the school day, officials hope they can be more of a community asset during the evenings and weekends.

The proposed new community entrance to the school will also offer access to a new park district office in the building, Potter said.

“We’re also very much in conversation around the programmatic elements of the park district and the school and how those can be increasingly fine-tuned to be coordinated with each other for the kids,” Potter said.

Plans for additions of expansive new play spaces for students are also included. Some of the new play spaces on the campus will be in tandem with the park district and its land, Potter said.

The district’s outdoor classroom space, which Potter described as a “hallmark of the school,” will also be expanded and relocated under the plan.

Sustainability efforts are also central to the plan. The use of solar panels, environmentally friendly “living” walls inside the building and a green roof are all proposed.

Officials are targeting work to be completed in three phases.

The first phase is primarily infrastructure work, Potter told The Record, adding that the district is going to begin the detailed planning for the second phase over the coming months.

The majority of that infrastructure work will be beginning at the end of the current school year in June, officials said. The district is hopeful to have that work completed by the return to school in the fall of 2021.

The second phase of work is the construction process, which is proposed to begin in June of 2022 and carry on for approximately 15 months.

Officials must first determine how to phase the project to continue to operate school effectively while building out aspects of the plan.

The specifics of the third phase still need to be finalized, Potter said, but he said officials think of this phase as the “final touches” and the completion of some technology upgrades throughout the school.

Officials expect the total cost of all work could be up to $25 million — but they do not currently know if it will reach that amount.

Work in the first two phases is estimated to cost approximately $19 million or less, officials said at the meeting. The district can complete this work by utilizing current fund balances while still maintaining a “comfortable reserve” for operating contingencies, Potter said at the board meeting.

The full master facilities plan can be found here.