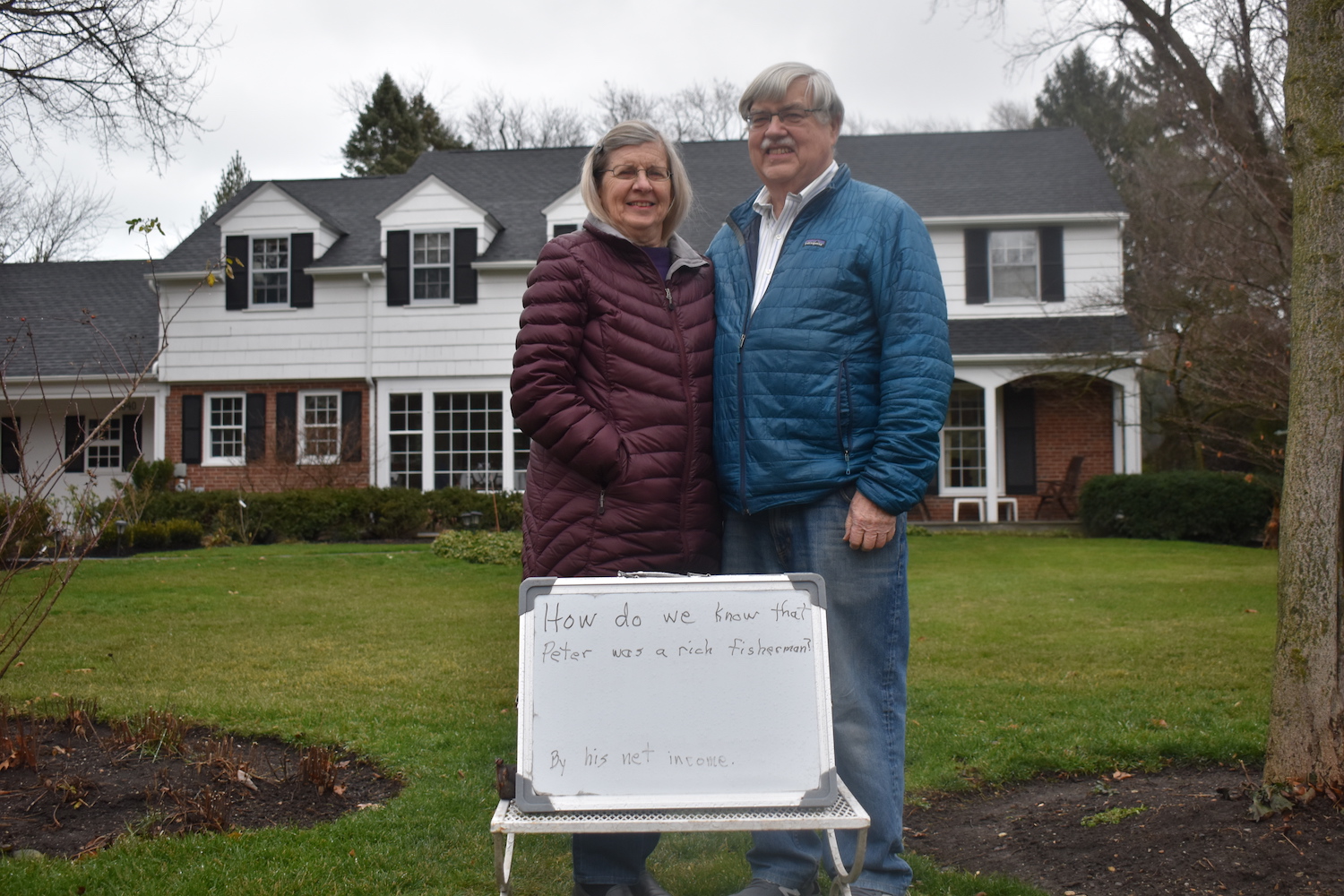 Dorothy Turek and George Sullivan outside their home in Wilmette, where George has been posting a new "dad" joke every day for five months. | Joe Coughlin/The Record North Shore

Why did the Wilmette resident cross the road?

To get a closer look at George Sullivan’s jokeboard.

If you thought that opener was bad, you should see the jokes scrawled on a whiteboard every morning outside Sullivan’s house.

Sullivan, who lives with his wife Dorothy Turek on Locust Road north of Iroquois Road, has been placing a whiteboard featuring a new “bad dad joke” near his curb every day for the past five months, all in an effort to boost spirits during the spread of COVID-19.

“The pandemic formed people’s habits and the way we connect with neighbors,” he said. “It’s a way of enriching that connection … spreading some goodwill and friendliness.”

A few weeks into the pandemic, Sullivan was reading The Washington Post and came across the story of Tom Schruben, of Maryland, who was posting a “Bad Dad Joke” daily outside his house.

In the story, author Allison Klein reported that the idea actually came from the Schrubens’ family friend in Ohio.

From Ohio to Maryland to northern Illinois, the bad jokes have spread, and they haven’t stopped there.

“People are getting a big kick out of it,” said Sullivan, who added that a Northfield man who visited has taken the idea to his front yard.

He began in May by placing the jokes in a binder on a curbside table.

Then his daughter, who joked that she disowned her parents for the cheesy schtick, sent a whiteboard to her dad.

The whiteboard took a beating during tough spring weather, and the next thing you know, another package came from the mailwoman.

This time it was actually from the mailcarrier, who enjoyed the daily routine as much as anybody and bought Sullivan a new whiteboard.

A mystery couple has sent two poems, six tulip bulbs and a Christmas plant so far. They sign their notes: Adrian and Joe.

Most of the jokes are gifts, too.

Sullivan has written his share and many are the product of a Google search, but some are from neighborhood children who leave joke lists under the whiteboard. They have contained comedic gold like:

When it was warmer, Turek said the couple would eat lunch outside and watch passersby stop and chuckle at the board, even catching local police halt for a moment.

Many have walked up the long driveway to thank them for the daily joy.

But one man was not so pleased with George Sullivan. One day the guy came right up to him and told him: