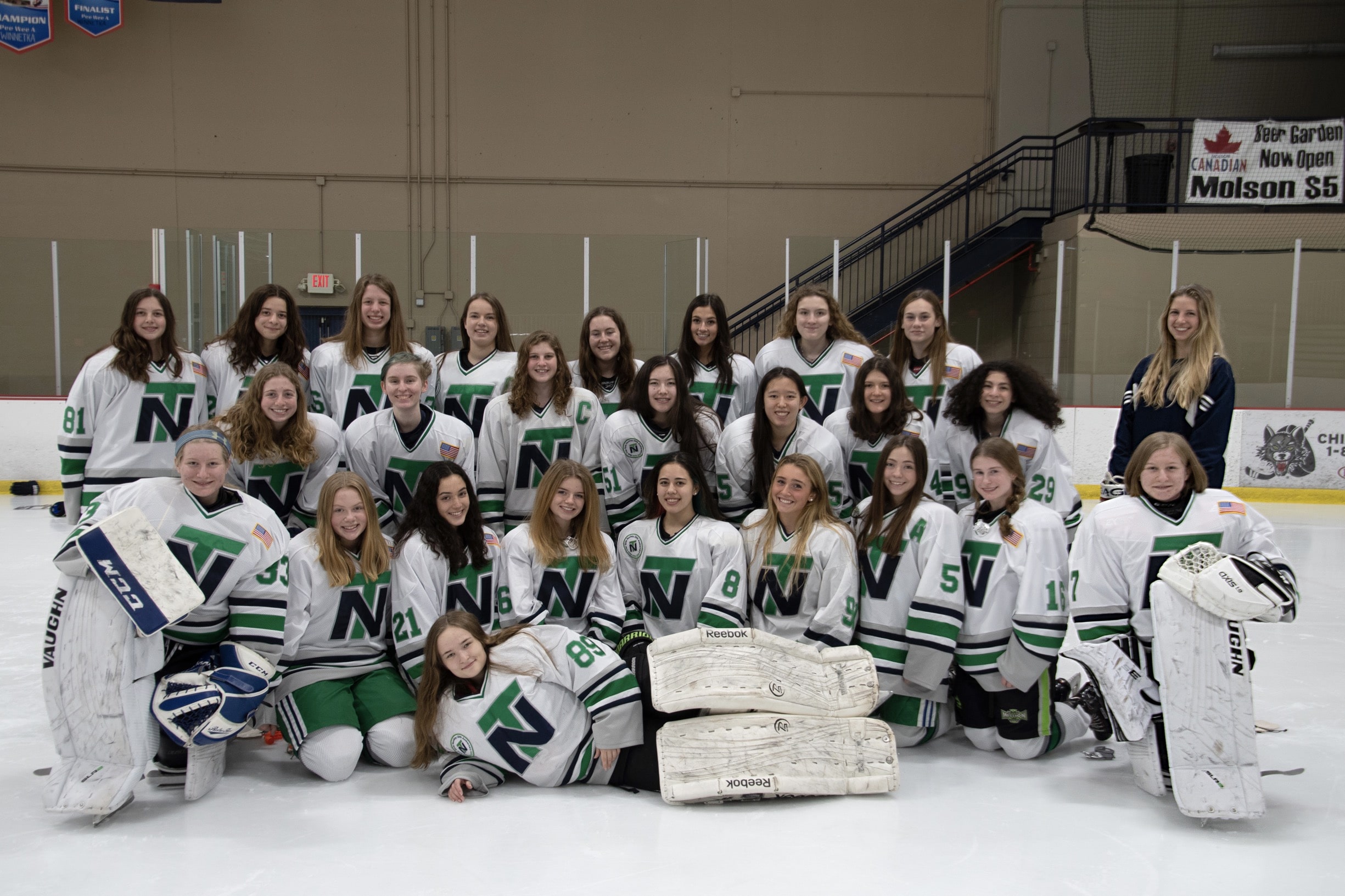 The 2020 New Trier High School girls hockey team may not get the chance to play for the state championship its team leaders believe it was poised to compete for. | Photo submitted.

The New Trier girls hockey team was ready for the moment.

The Trevians had their eyes on Fenwick, their semifinal opponent March 17, but their hearts were set fixed on an AHAI state championship.

As the tournament’s No. 1 seed and with a probable date with Loyola Academy at the United Center for the state championship on the line, New Trier was about to show the rest of the state they were worth the hype — and then some.

The coronavirus pandemic abruptly ended the tournament. At the time, players hoped AHAI could just postpone the final games a few weeks, but as everyone knows now, that was never possible.

And neither was New Trier getting the chance to show they were the best.

“It just got taken away,” senior Sabrina Shvartsman said. “That’s pretty frustrating because we were all super excited and ready to play.”

New Trier and other local hockey teams have been ready to play since the spring but still don’t know whether they’ll get the chance this school year. Many teams have met on the ice over the summer and through the fall, but because of state restrictions, they never played a game.

Now with all indoor sports put on pause, with rising COVID-19 numbers once again increasing restrictions, many aren’t sure they’ll ever play at all.

The Trevians did take advantage of practice time when it was possible, but there couldn’t be any more than 10 people on the ice at any time and all players had to wear masks and social distance while coming to the rink fully geared with the closure of the locker room.

Despite all the restrictions, Munson wanted to create joy wherever he could.

He didn’t cut anyone from tryouts this season, and during the two one-hour practices, the first half was filled with skills competitions and the rest of the time the players were allowed to do what they pleased, socially distanced of course.

“We would look forward to it all day long,” junior Courtney Schumacher said. “It would be a late practice at 9 p.m. and that was what I was looking forward to: being on the ice with my friends.”

‘We’ll get through this’: Winnetka Hockey Club battles the challenges of the pandemic

Evan Nielsen had to learn on the fly as the Winnetka Hockey Club’s new hockey director. He started in July and had the task of trying to figure out how the travel and house league teams would operate this season.

The club started putting teams together in September and followed all of the state and local guidelines. Most of the work at the beginning was skill work and development, giving players and coaches a chance to get to know each other.

Some travel teams had a chance to compete in games but the house league never started play.

Nielsen hopes colder weather helps the club get its players back on the ice. With a couple outdoor rinks ready to be set up once the ground freezes and temperatures remain consistently low, coaches will get a chance to get their teams back on the ice outside, which is allowed under current restrictions.

In the meantime, he’s been impressed with the community support of each member. The club’s participation numbers have remained the same from past years, which has given the new director hope.

The waiting is the hardest part

New Trier will still have to wait in the unknown.

Munson mentioned the AHAI has plans prepared for a season but must wait to see what on guidance from Gov. J.B. Prtizker’s office. He wishes the state could lockdown until the new year to get a handle of the high numbers so they could start a season in the new year.

It’s frustrating for many of the players because of the talent on this season’s team. Munson thinks this year’s group is as good as any team in the past five years, which included a state champion in 2018.

But the Trevians just want to play. Even if it means there’s no state championship, many Trevians want to play one game against another team, to see just how good this team is.

“It’s really hard not knowing what’s going to happen and it’s really hard knowing that I’m missing out on this opportunity,” senior Serena Seiple said. “I think we’re just trying to do what we can and I hope we can manage to get something by the end of the year but overall safety is what’s important. Although it really sucks to miss out, hopefully we can get past everything going on.”

They’ll just have to wait for their moment, if it ever comes.