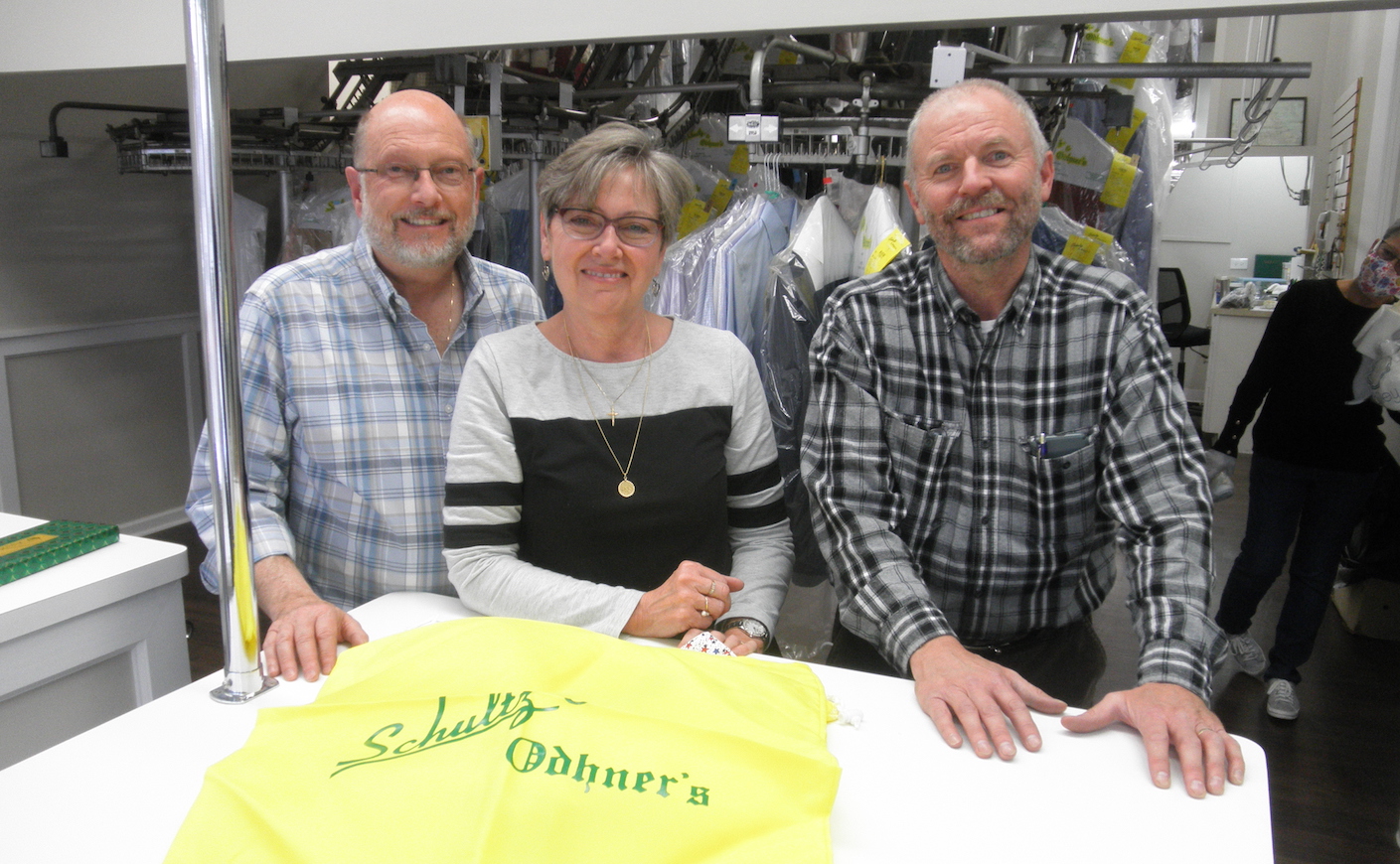 One by one, a steady stream of dismayed longtime customers filed into Schultz & Odhner’s Dry Cleaners this past week to pay their last respects and deliver best wishes to the owners and staff of the North Shore’s first dry cleaners and one of Wilmette’s oldest businesses.

The cleaners, located in the same building at 1152 Central Ave. since 1901, will be closing its doors for good on Friday, Dec. 4, another casualty of the COVID-19 pandemic.

“It’s been an emotional roller coaster going through this decision making,” said co-owner Cory Schipfer, who has been with the business for 38 years. “We’ve tried every which way through this pandemic to try to come up with ways to make it work and the money is just not there because the cleaning isn’t there. Most cleaners are down 50 percent or more now. They’re all suffering.”

“The industry is changing,” he continued. “The work attire is going away because people are working from home. Big corporations are eliminating their office space downtown and most of our customers have told us they are going to be working from home in their sweats. And we haven’t had any bridal functions, or cotillions, or fundraisers downtown that we did the fancy gowns for.”

“The pandemic has changed everything,” said Cory’s wife Colleen, who is also co-owner Dennis Golden’s sister and has helped out with marketing and other duties for many years. “We are at an age where we can say, that is enough, we’ve done what we can and we can retire. We are waiting for a vaccine but the turnaround for that could be a year. That is a little too long for us to be kind of hanging on. I’m sorry we had to get to this point but you can’t fool around with your retirement. It is something we had to keep safer.”

In a business built on personal relationships, the family will miss its customers most of all, said Colleen:“They’ve been so kind and generous and come to us for years.”

“Cory is like a bartender,” she laughed. “He loves to talk to the women. He can gab for hours.”

Service above and beyond has been a big reason for customer loyalty, said Colleen. The company made a point of distilling their solvents after every load, hand-finishing most items and doing the “little things” like testing zippers, replacing buttons, packaging appropriately and insuring their work.

“If you brought in a pair of pants and the seam was ripped and you couldn’t wear it out, we’d fix it for you,” she said. “We would charge you, but customers appreciated it.”

They will also miss their employees, many of whom worked there for many years.

Colleen noted that one of those former employees brought them lunch last Tuesday. Years earlier, the family had helped that woman bring children here from the Philippines.

Also Tuesday, another former longterm employee came in to say goodbye and stayed for hours to help out.

“This has become family for everybody,’ said Colleen.

Another misty memory will be their ongoing coat drive, which this year sent more than 100 cleaned coats to the Episcopal Church of St. James the Less in Northfield and the Howard Area Community Center.

Many family members have worked at the cleaners over the years, often. Among them, Colleen’s sister, expert seamstress Cathy Stegich, who started when she was 17. That was 52 years ago. Colleen began work there when she was 13.

Her son Brandon, who started out as a youngster cleaning the floors, put his memories to paper this way: “At a young age we learned the meaning of responsibility and hard work.”

He recalled, as well, playing on the racks like monkey bars, playing hide and seek throughout the building, and being driven around the shop in a laundry bin like a race car by his father and doing the same with his son 25 years later.

“I am grateful for what it has taught me, not only for the work aspect but also the strong family ties it has instilled in us kids,” he said.

Looking forward, the extended family is not going anywhere. They own eight homes in a five block radius in Northfield. And the building on Central in Wilmette will remain in family hands.

“We’re going to stick around and become landlords,” said Colleen. “We’ll rent out this space eventually.”

In the meantime, as they prepare to close the doors to the dry cleaner for the last time, Colleen crystalized the family’s feelings.

“It’s like going through the death of a family member,” she said. “It really has been. This was my dad’s business and it has been our family member all these years.”