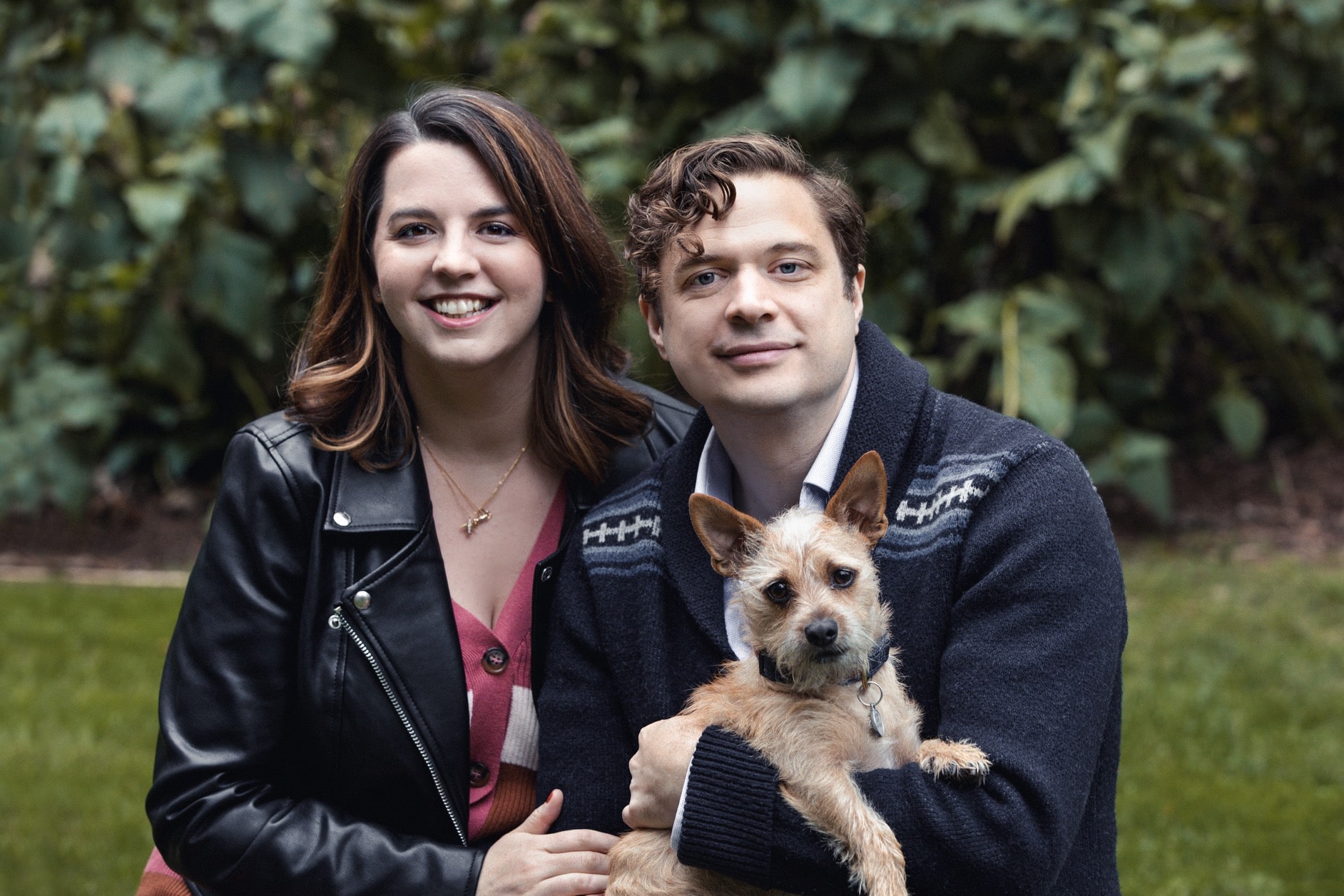 Megan and Tim Bungeroth, and their 1-year-old Cairn terrier-chihuahua mix, Arthur, pose for a photo. | Photo courtesy of Gillian Fry

Tim and Megan Bungeroth believe in the power of perseverance.

The husband and wife have faced their share of challenges. But when life gets tough, the Bungeroths find inspiration and hope from an ongoing journey they’ve shared.

The couple is the creative team behind Air Hares, a new all-ages PC game and graphic novel inspired by their infertility journey that led them to technology and hope. Tim and Megan have intertwined their experiences into the artistry for Air Hares.

The concept for Air Hares originates in 2015 when Tim, who is a Winnetka native, and Megan were playing a “Star Wars” tabletop game. After a series of improbable game maneuvers, Tim asked Megan who was guiding her unlikely successes in the game. With little hesitation, she replied, “It’s Captain Rabbo,” a reference to one of her long-standing nicknames.

Just like that, the protagonist of the Air Hares universe was born.

Near the end of 2018, the Bungeroths, who now live in Chicago, decided to fully invest in Air Hares and make its development their creative anchor.

Two years later, Megan and Tim launched a Kickstarter campaign in mid-October to further support the development of Air Hares.

The campaign is in its final week and is currently approximately 70 percent funded. A successful campaign will allow the team behind Air Hares to accelerate both the game’s and graphic novel’s timelines.

“We’ve been slowly piecing this together over the last two years and now we’ve started to accelerate it,” said Tim Bungeroth, a native of Winnetka. “We looked at where we were with the project and saw that we had a lot of material; enough material to show people and get people involved.

“ … We’re at a point where we feel proud of the story that we’ve built and we’ve got feedback from our friends and family and they liked it and now we’re ready to share it with the rest of the world because we believe in it and we want to share it. That’s been our goal from the start.”

Air Hares is the latest creative project from the Bungeroths. Tim, who is a playwright and writer, specializes in narrative design and verse. Megan, who is the marketing lead behind the project, is a magazine editor and writer. They have both long aspired to create their own game and methodology.

Air Hares follows the story of ace pilot Captain Rabbo and her crew’s quest to defend their homeland against the game’s villains.

The main objective of the game is to seed and water a barren field to produce a carrot crop, all while dodging attacks.

The three-episode graphic novel is meant to be a prelude that introduces Captain Rabbo and some of the game’s other characters, the Bungeroths told The Record.

As Megan and Tim continued to develop both the game and the graphic novel, they started to realize the similarities between what they were creating and their own lives.

During the early portion of development the couple started trying to have a baby. They were unsuccessful in their initial efforts and started going through infertility treatments.

“We started to realize that as we were going through all of this, it was in some way reflected in what we were creating (with Air Hares),” Megan said. “… If you look at the map that we had made of the (Air Hares) world, it’s loosely modeled on a female reproductive system.

“It impacted us because we realized that Captain Rabbo is faced with the natural world being upended and there’s not a lot of hope. She has to rely on technology and sheer optimism to try and revitalize the world and help her friends and connect the community. And that sort of is the journey that we’re on, where nature has told us no and we’re turning to technology and science to help us also create.”

Incorporating their own personal experiences into the development of Air Hares is something both Megan and Tim cherish and value.

“It honestly has been really positive and kind of empowering to do that because I think that infertility can be tough to talk about.” Megan said. “ … For us, this has enabled us to talk about what we’ve been through and connect it to a story that means something to us.”

Like most couples going through in vitro fertilization, commonly called IVF, Megan and Tim have hit their share of setbacks. And the COVID-19 pandemic has only complicated their efforts.

But despite the challenges, the couple has found joy in the creation of Air Hares and the chance to see their journey come to life.

“We started making this game for each other,” Tim said. “When I finished a draft of a script, I told myself that if Megan likes it, then it deserves to exist and I’ve done my job. And I wanted to write this for the kid out there that isn’t here yet but that we believe is going to be here soon. We wanted to write it for them too and for it to be their story.”

Megan and Tim said their plan, with the inclusion of a successful Kickstarter in the timeline, is to have both the PC game and the graphic novel released within a year from now

Supporters who back their Kickstarter will have an opportunity to be invited into the development timeline, Tim said, adding that with a successful campaign everyone will also receive an updated build of the game that is much closer to the final project.

Air Hares will first be released on PC only, but there is the potential Megan and Tim explore releasing the game on a mobile platform, they said.

Right now, their hope is to bring joy into people’s lives and share their journey with the world.

“We just really want to share this world with people,” Tim said. “We’ve created this world for our friends and families and we would be thrilled if anyone was into it. But I think it speaks to a lot of people.

“If you ever feel like, in the story of being blocked in your dreams, and continually going after them and persisting … I think this story and our story have a lot to say about that and what you do when you just keep going. When life tells you no, you keep going and you keep surviving and you keep persisting and good things are going to come eventually if you keep at it.”