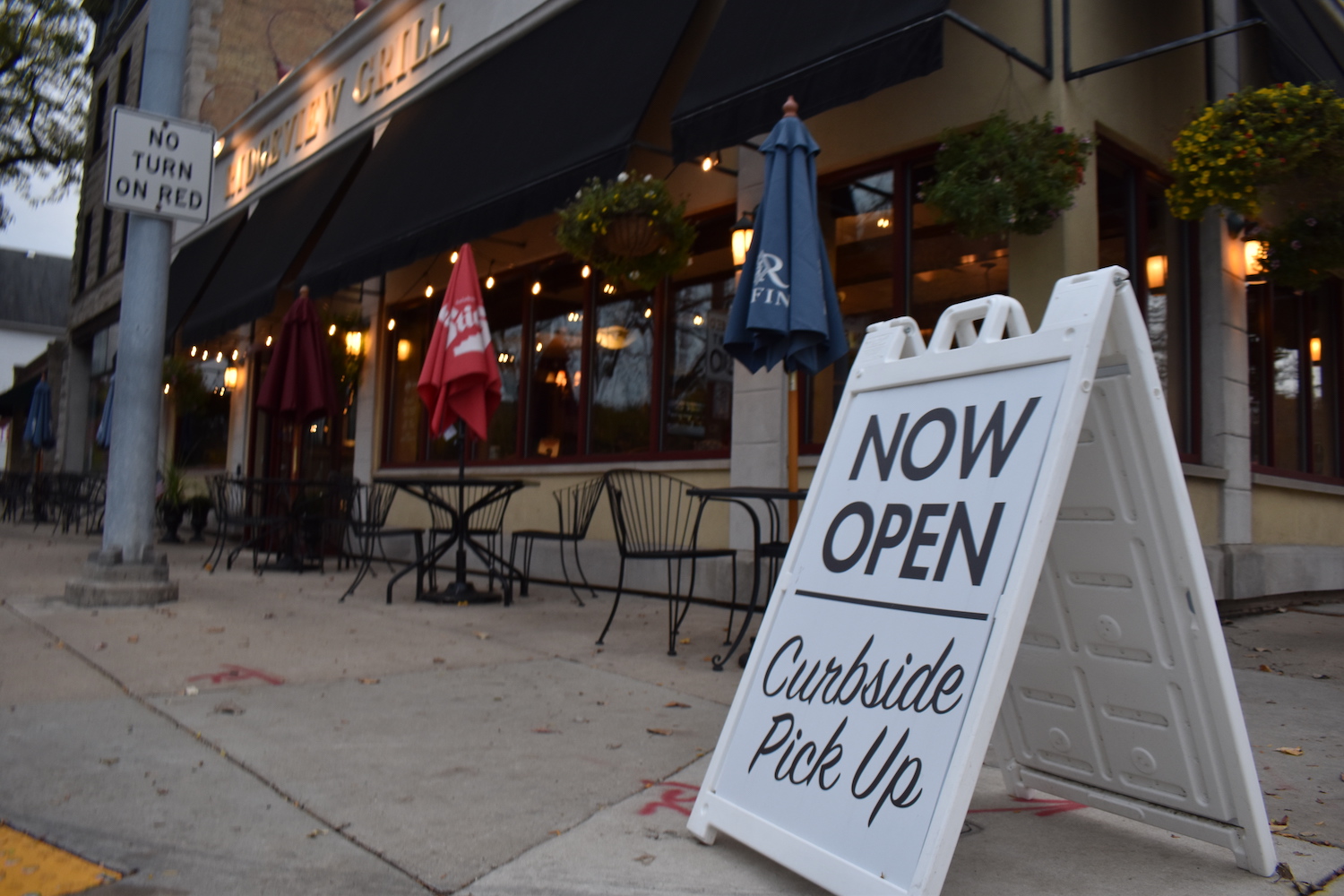 Frustration, anxiety and resignation were the dominant emotions on tap among managers, staff and patrons of bars and restaurants across New Trier Township Tuesday, Oct. 27, hours before a state-mandated ban on indoor service and seating was scheduled to take effect.

The new “resurgence mitigation measures” were implemented Wednesday, Oct. 28, in all of suburban Cook County, according to announcement from Illinois Gov. J.B. Pritzker and the Illinois Department of Public Health.

The directive comes as the state faces a sharp increase in COVID-19 cases and hospitalizations.

“Trying to keep it civil, the frustration levels are through the roof,” said Chad Bidwell, owner/operator of the popular Stormy’s Tavern & Grille in Northfield. “We are taking every precaution here: health, safety, employees, customers, sanitation, equipment. Whatever we’ve done, we’ve gone above and beyond and we’ve had no issues here whatsoever.”

Stormy’s “will be open in terms of what we are allowed to do,” which may just mean curbside takeout, Bidwell said, noting that “it’s hard to sustain any type of business with just that.”

After laying off much of the staff late last spring, Stormy’s brought everyone back. But now, its “facing that daunting task again,” Bidwell said.

“It’s not going to go over very well,” he added. “We have 30-plus employees with families and kids. How do we survive and provide for all of them, because unemployment isn’t going to provide.”

John Sklepetas, who runs the Northfield Restaurant, said it will continue to offer takeout service, but voiced similar frustration.

“I feel (Gov. Pritzker) is overdoing it,” he said. “It’s easy for him to say we have to shut down, but how about the employees.”

The latest round of restrictions is “definitely decimating” to the restaurant industry, Illinois Restaurant Association President Sam Toia said in an Oct. 20 interview on WGN radio.

Up to 40 percent of the 25,000 restaurants across the state “could close for good,” in part if the federal government doesn’t “step up” and pass a stimulus bill with help for restaurants, he said.

In a statement on the association’s website, it also called on Gov. Pritzker and the General Assembly “to take a pragmatic, tiered approach to mitigations and provide direct financial support to struggling restaurants around the state.

“COVID-19 cases are rising in Illinois, but the fact is that restaurants are not to blame,” Toia added. “Restaurants are highly regulated, frequently inspected and held to the highest health standards. Keeping people safe is what restaurants do every single day. Closing restaurants for indoor service will result in the exact opposite of the intended impact of slowing the spread, as it drives people further into uncontrolled, unmonitored private gatherings where few safety precautions are in place.”

As of Oct. 26, the day Pritzker announced the new restrictions, Illinois’ Region 10, which is suburban Cook County, including New Trier Township, had recorded eight consecutive days of increases in COVID-test positivity, officials say. It also had seven days of increased COVID-related hospital admissions, making it the first region in the state to meet the metrics for additional mitigation measures.

“We are seeing test positivity across the state increase, but for Region 10, suburban Cook County, we are also seeing a steady increase in hospitalizations for COVID-like illness,” Dr. Ngozi Ezike, IDPH director, said in a state press release.

According to Toia and the restaurant association, 594,000 people were employed in the industry at the beginning of the year, but 120,000 are still on unemployment, he said. The majority of those are waitresses.

Kelly Knight, a waitress at the Northfield Diner, was laid off in the spring, then got her job back a few months ago. But she now once again faces an uncertain future.

“I don’t know if I will have a job tomorrow,” Knight said.

The year-over-year numbers at the Ridgeview Restaurant in Wilmette are down and will suffer a bit more because of the latest restrictions, but its ownership team fully plans on continuing their takeout business and weathering the storm, said co-owner Dean Thanos.

Still, he issued a dire prediction.

“The longer this lasts, the decision then becomes what do you do after you have exhausted your alternatives,” he said. “I think a lot of operators are probably hanging by a thread. We’re not doing terrible but we’re not doing great. If this persists nobody can really overcome the odds.”

At the Guildhall restaurant in Glencoe, survival has become the mother of invention.

Earlier this year, they repurposed the bar into a pop-up sushi stand. Now, in preparation for winter, they are having 12 iron-framed, windowed and heated greenhouses being built to accommodate outdoor dining.

“We wanted to do something more durable. You are going to see the snow falling on you,” employee Christele Garnier said of the structures, which have been approved by the village.

“It’s the new normal, unfortunately,” he said. “Eventually there will be a new vaccine. Now, we just have to succeed with what we have and all our great staff.”

The restaurant opened in January, and has made numerous adjustments through the year, including installation of a hospital-quality air purification system.

Johnson hopes there will be no layoffs, as staff double up as delivery drivers, kitchen prep, and fillers “wherever they can.” Its outdoor patio has 11 tables and eight heaters, but Johnson said time is running out on al fresco dining for the year.

“Forty degrees is kind of the cutoff where people want to sit outside,” he said.

Avli, in the Laundry Mall in Winnetka, has one of the most protected outdoor eating areas in the area, and with the addition of more heaters and a reduced staff it will make a go of it in the coming months.

Still, manager Yanni Mtemplas said he expects takeout to remain popular because many of their guests, particularly young families, “are still afraid” to dine in.

Down Green Bay Road at Marco Roma Pizzeria in Winnetka, it will once again be open seven days a week only for take out and delivery.

“You can’t predict something like this,” said owner Joe Marchionna. “You just have to live through it and roll with the punches. We are just appreciative that everyone continues to support us. We are committed to keeping this place going and doing the best we can.”

Don Kreusch, a regular at the counter seating at the Northfield Restaurant for 45 years, spent his last morning for the foreseeable future in a similarly accepting mood.

“It is what it is. You have to accept the things you cant change. I have no control over the government closing this place.”

Josh Schonfeld — the director of operations and managing partner of the restaurant group that owns Napolita Pizzeria and Pescadero Oyster and Wine Bar, both in Wilmette — agrees and will be compliant while hoping the shutdown helps slow the pandemic spread.

Like others, he is most worried about his staff, but is confident the community will step up.

“The worst part of whole thing for us is the staff,” he said. “We have a very very dedicated team. Not having indoor dining has a huge impact on the hours we have for our staff.

“We are very fortunate with the amount of support we get from the community. Takeout and delivery gives massive support that really helps us employ many of our staff members during these setbacks and restrictions.”