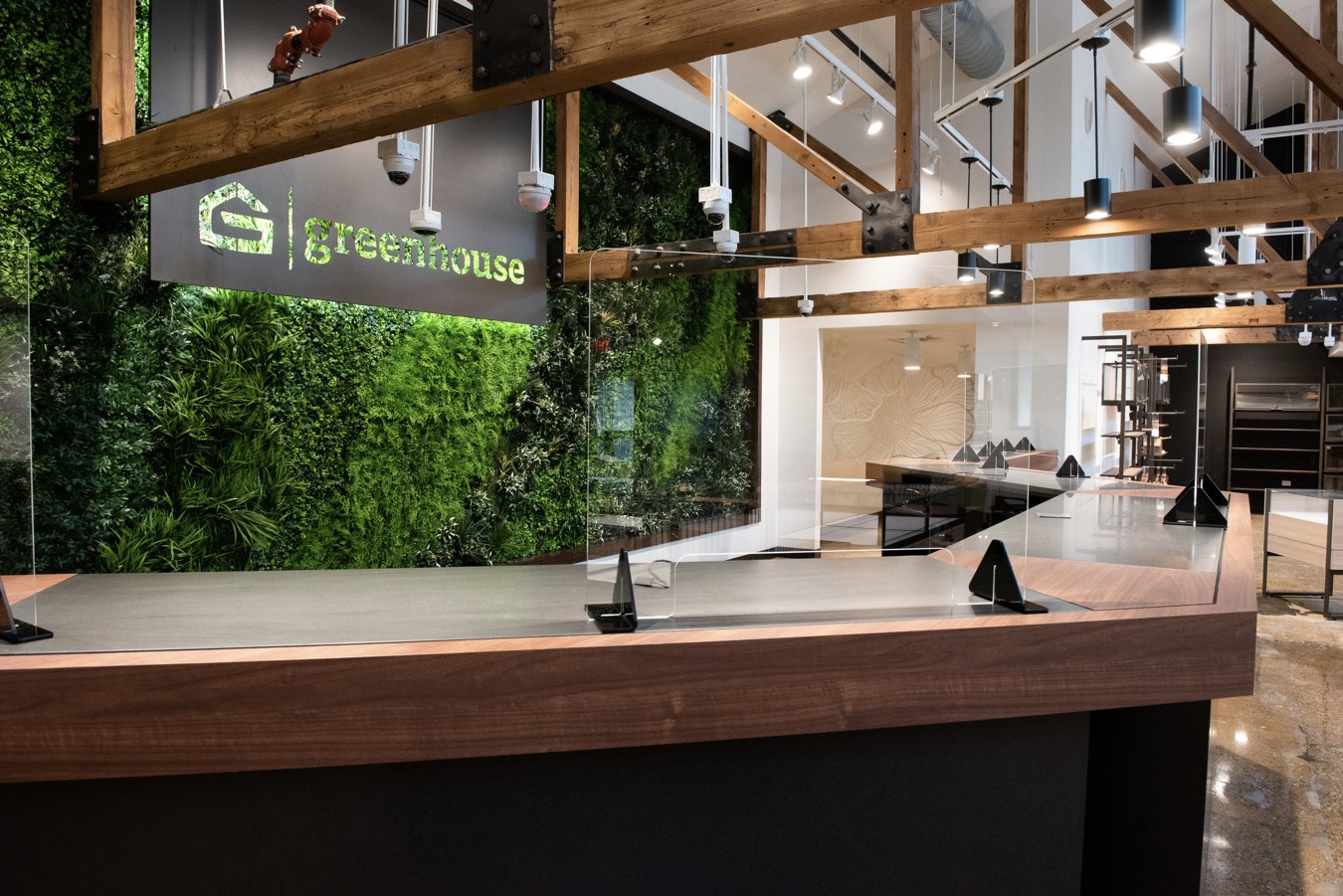 Northbrook officials are estimating they will receive upwards of $450,000 in sales tax revenue from Greenhouse (pictured here), a new cannabis dispensary. Facing a revenue loss that could total $1.5M, Northfield officials are considering allowing cannabis sales in the village. | Photo courtesy of Greenhouse Group.

Faced with projected financial shortfalls and new information from nearby municipalities, Northfield officials are considering reversing course on their 2019 decision to not allow cannabis-related businesses in the village.

Northfield’s Village Board discussed whether it wants to move forward with permitting cannabis businesses in the village during its Tuesday, Oct. 20 regular meeting.

The majority of trustees signaled their support for what several described as a “complete 180” on the topic.

After approximately 30 minutes of discussion on the matter, village staff were instructed to begin preliminary work on drafting an ordinance that the plan commission will consider in the future. The process of allowing cannabis sales in the village requires a public hearing before the planning and zoning commission and subsequent final board approval.

Last year, in anticipation of the state’s legalization of cannabis sales under the Illinois Cannabis Regulation and Tax Act, Northfield officials voted to prohibit all cannabis establishments in the village.

Officials based their decision on a lack of information on crime, traffic, parking and anticipated sales tax revenue, according to village documents. Trustees, however, did include provisions that the topic would be reassessed when more data became available.

With the village now anticipating a revenue loss of up to $1.5 million, attributed to COVID-19-related consequences, the local 3 percent tax on the sales of adult-use cannabis is an option officials think could help make up for the shortfall.

“Obviously every municipality has been very hard hit financially by the COVID situation, primarily in the area of sales tax with businesses having to close for an extended period of time or operate in a sort of minimum capacity,” Northfield Village Manager Stacy Sigman told The Record. “We’ve seen a decline in sales tax and so the village began, like every other village, to look at different ways we can enhance revenues and cannabis (sales) came up.”

At the local level, while data is relatively limited at this point, nearby villages are estimating significant returns from the sale of cannabis. In neighboring Northbrook, officials are expecting $450,000-600,000 yearly in local cannabis sales tax revenue from a dispensary that recently opened at the corner of Skokie Boulevard and Dundee Road.

Some of Northfield’s neighbors (Winnetka, Glenview, Kenilworth and Glencoe) have also banned sales and to this point have held firm on their original rulings. Wilmette, Park Ridge, Morton Grove and Mount Prospect will ask voters via a referendum on the Nov. 3 general election for their thoughts on the sale of cannabis within the village.

Illinois officials have already issued all of the existing operation licenses for cannabis businesses; however, the state plans to issue another 75-150 new cannabis dispensary licenses in early- to mid-2021, making it an advantageous time for the village to amend its code and allow sales, village officials say.

“Right now, all of the existing licenses are already allocated … but there is a next round of licenses that will come out in 2021,” Sigman said. “So if the village were to decide ‘yes,’ it would be good to have village code amended before that next group of licenses comes out so that our community could be considered along with others that allow it.”

Village trustee Tom Whittaker, during a presentation to his fellow board members, said officials found few specific examples of crime directly related to the sale of cannabis in the nearby communities that allow it. He added that several nearby towns that originally disapproved of cannabis sales have already moved to approve them now.

“My own opinion is … to move forward with it for two reasons,” Frazier said. “First of all, did you know that in the past nine months, half a billion dollars worth of cannabis has been sold in the state of Illinois? I had no idea there was that kind of demand.

“We do need the revenue. We really need the revenue. And I don’t want to say this is a gold rush, but it’s pretty close to being one. We need the revenue and I will say what I already said last year, cannabis sales are already here. … You can just hop on right down the street to Northbrook or you can go right up to Skokie. … If we saw that there was (an increase) in crime, I personally would be very opposed to it but we’re not really seeing that at all.”

The majority of the board shared similar thoughts of support with the exception of trustee Thomas Terrill, who expressed opposition to moving forward with the process. Terrill cited safety concerns, an increased level of competition from other villages for dispensaries and doubt about the potential revenue as reasons for his opposition.

After each trustees shared their thoughts, the board narrowed down potential locations for dispensaries — if it were to allow cannabis sales in the village — to either the Frontage or Waukegan roads corridors.

No definitive action was taken during the board’s Oct. 20 discussion. A hearing on the potential ordinance staff will work on could be held at the January Planning and Zoning Commission meeting, with a final decision coming as early as the Village Board meeting on Jan. 19, 2021.

Members of the board who did support moving forward generally agreed that a retail dispensary is the only viable option in Northfield and it should require a special-use permit. They also believed at least a minimum distance of 1,000-1,500 feet between a dispensary and schools, places of worship, parks and “sensitive places” should be applied

Round It Up: A brief breakdown of village trustees’ thoughts on the sale of cannabis in Northfield

• Trustee Greg Lungmus — “I’m going to admit that I have taken a complete 180 on this and there’s a couple of reasons why. One is when I’ve seen these dispensaries go up, both in Skokie and in Northbrook, it’s not at all what I had envisioned when we first discussed this. … I have a completely different view of this than I did when it was first introduced.

“I’ll be the first to admit that I’ve done a complete flip on this. I am much more opened-minded to this. I think done right, going through our planning and zoning, with heavy scrutiny about zoning and where we would want to do it, is something we should certainly look at with a more open mind.”

• Trustee John Goodwin — “I think Trustee Whittaker’s report is very eye-opening. … This trend and these sales in Illinois are somewhat astounding. So it does seem like it’s getting more mainstream and based on budgets and how creative we’re going to have to get in the future, I’m definitely open to it now.”

• Trustee Thomas Terrill — “My thoughts have not changed because access to marijuana is very available to any doctor that writes it up for a prescription. So any person that is in pain, or is in discomfort, or can’t sleep, certainly has access to it and probably at a competitive price.

“It’s very difficult for me to think of the recreation use of it. People driving cars under its influence and I think the competition is going to be so great … within 3-5 minutes of driving. I wouldn’t want to open up a store with that type of competition, I think it would be foolish. … So I think it will be something a little unique to Northfield that we are holding by previous standards and if it’s needed for medical purposes, Walgreens will sell you all the cannabis you want. … So my feeling is still holding onto the previous position.”

• Trustee Todd Fowler —  I think today we see a different outcome than many anticipated. … I’ve had a chance to drive by the Greenhouse (dispensary in Northbrook) and it’s a very civilized situation and it goes very much to what you see in Colorado, where there’s dispensaries all over the place. I would just hate to think that we would put ourselves in a position by not at least allowing it, doesn’t mean someone is going to come, but what we’re doing here is just giving us that option value and hopeful somebody decides to come to Northfield if we do decide to go forward, which I am in favor of. But we don’t know yet. I think the key thing is we control the zoning, we control where it would be, what it would be — and I would want a special-use permit for it so they would have to come in and adhere to certain guidelines we put in place that really makes us comfortable at the end of the day.”

• Trustee Charles Orth — “I too agree … on doing a 180. I think so far the areas that have opened really haven’t had crime or issues. I truly believe that the people who use it are … going to (use it) in Northfield regardless of where they get it from.”

“… I think we have to do what we need to to do to be fiscally responsible and bring additional tax dollars in and see what the future brings. I am definitely not opposed to researching and moving forward in some kind of ordinance change.”

• Trustees Tom Whittaker — “I think Trustee Fowler hit the nail right on the head when he said no one knew where we would be last December when we first talked about this. … I think we were very smart as a board to leave the door open and not shut it, which we’re doing today. I think that we can do it in a very safe and smart way. … I think that I can share with you that I feel like we need to keep that door open. I think we need to have an ability to, if someone approaches and says we would like to be in your town, to say yes. But I also think we have the ability to regulate that as well.”