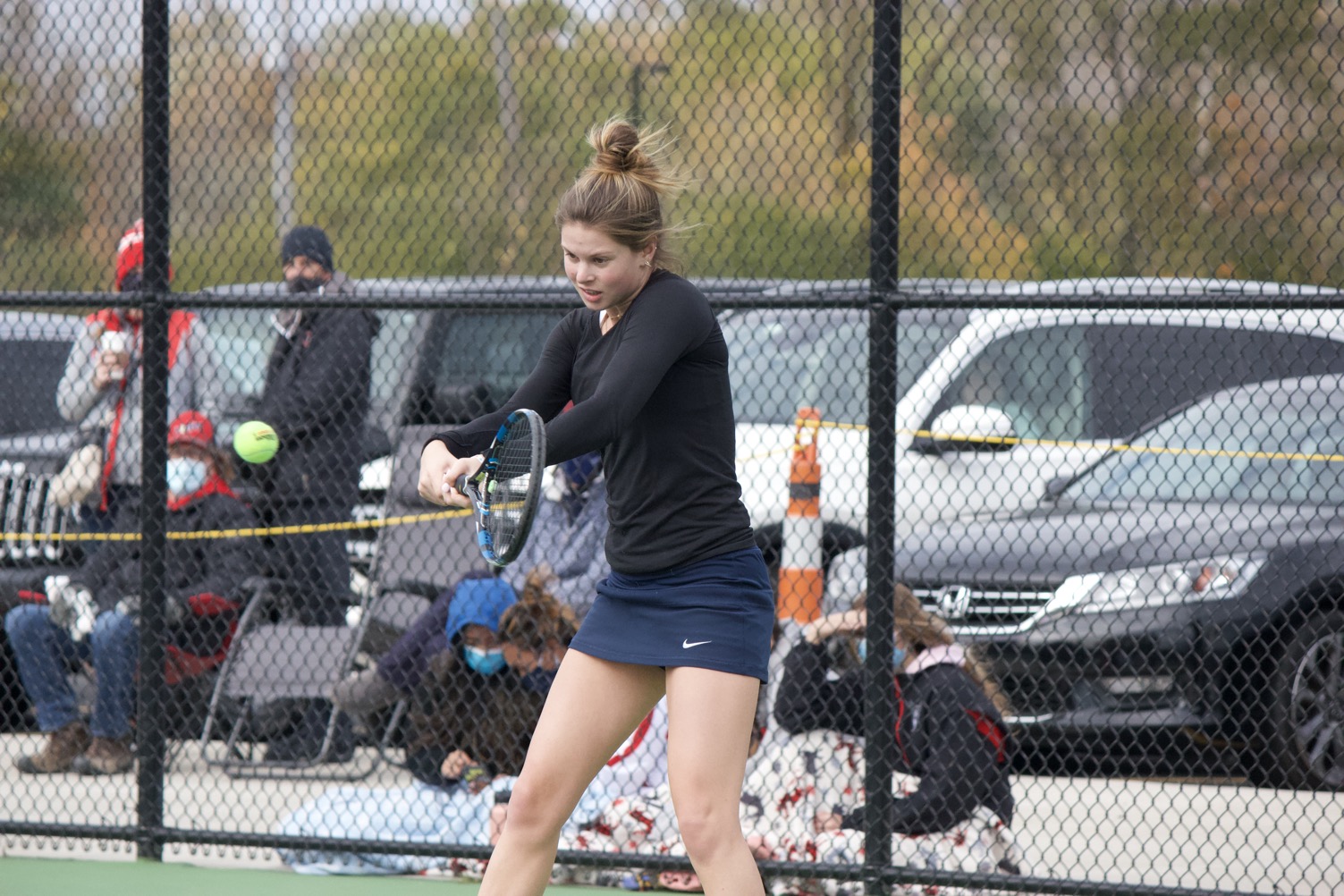 Sometimes situations end perfectly, even in an imperfect year.

There were plenty of obstacles along the way, but New Trier girls tennis captains Macy Zaban and Emma Bhote ended their high school careers on top, winning New Trier’s doubles sectional on Saturday, Oct. 17, at the school’s Northfield campus.

Despite battling hail, rain and strong winds during the two-day sectional, the two seniors, who tried out together their freshmen season, ended it together, as well.

“It feels amazing because I wanted to end on a great match and I feel Emma and I both played amazing and we put our hearts out on that court,” Zaban said.

“The perfect ending for sure,” Bhote added.

The senior duo capped a strong day for New Trier, which won the team title at its host sectional.

The two battled against Deerfield’s Bella Schoen and Allison Lee in what was their third match of the day because of a delayed Friday.

Zaban and Bhote started the match strong, winning the first set 6-3, but faltered in the second set, 6-1. They found themselves in another hole in the third set, down 4-2, before rallying to tie things 4-4 and 5-5 before winning the final set 7-5.

“It helped to feed off of the crowd’s energy, our teammates cheering us on,” Bhote said.

Though she had to adjust for the elements, Liu looked strong in her first postseason, dropping five games total during the two days.

“I made sure to play my A-game,” Liu said. “Even though my serve wasn’t working that well (Saturday), I still was able to pull through.”

The Trevians second doubles duo, Keria Botjer and Tess Trieu, battled to a three-set loss in the semifinals before falling in the third-place match.

North Shore Country Day was led by its doubles pair of Penrose Bigelow and Taylor Vallas. The two won their first match against Northside 6-4, 7-5 before falling to Deerfield 6-0, 6-0 in the third round.

Singles player Marissa Youderian advanced to the third round after winning her first matchup against Northside 6-3, 6-0. She fell in the third round to Deerfield’s Valentine Bellagamba, 6-1, 6-0.

Loyola knew the tournament would be tough given its draw.

Despite the tough competition, Ramblers coach Tom Gordon was proud of the way his team performed.

Carline York won her opening match, 6-4, 6-1, against Deerfield’s Danina Hughes before she fell to Liu in the third round.

Even though the Ramblers didn’t end on the highest note, Gordon was proud of how the team responded all season to the challenges of playing in a difficult season.

The Ramblers won their conference, the Girls Catholic Athletics Conference, the week before the sectional and battled in a season that seemed more ordinary that many would think.

“I thought it was a very successful year,” Gordon said. “It wasn’t that different of a year all things considered.”

The Trevians season ends without the players having a chance to compete in a state tournament, which was canceled by the IHSA because of COVID-19 concerns.

While there was some desire to play for more and winning a state title, the New Trier coaches and players were proud to control what they could and make the most of it.

“We would love to have it but we always want more with things and sometimes we need to be satisfied with what we have,” New Trier head coach Jerry Morse-Karzen said. “We’re very happy to have had this season, we’re happy to have had conferences and sectionals. Sometimes you can’t take what you have for granted.”