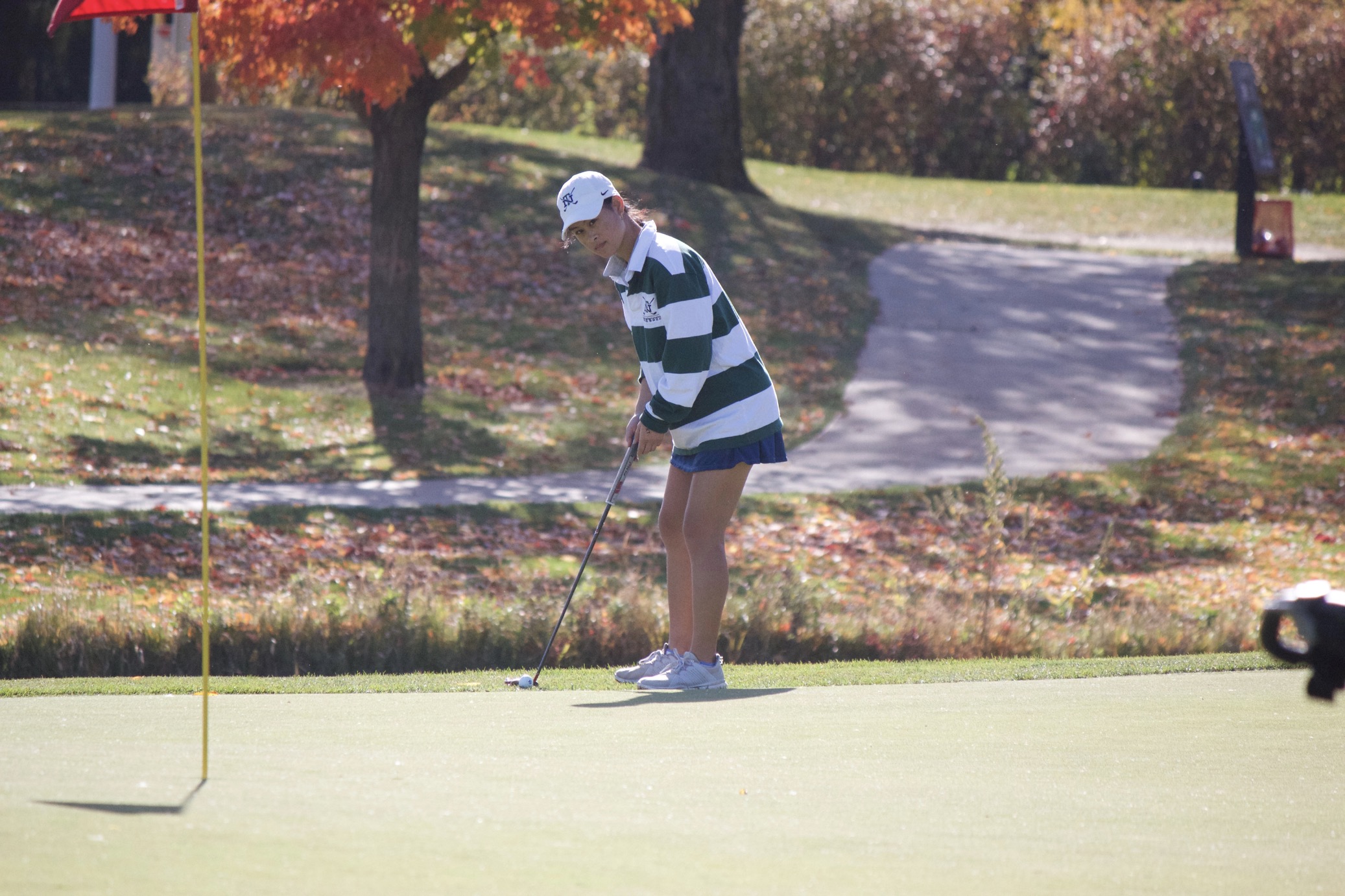 New Trier senior Audrey Tir, who was the regional champ with a 76, also won the individual sectional crown with a 74 on Tuesday, Oct. 13, in Arlington Heights. | Martin Carlino/The Record North Shore

The New Trier girls golf team ended its season at the top, but for many of the golfers and coaches, it felt incomplete.

When the Trevians hoisted their IHSA sectional plaque on Tuesday, Oct. 13 — after winning the tournament handedly at the Arlington Lakes Golf Club in Arlington Heights — they were proud. But this team had higher aspirations.

“This is one of the best teams we’ve had at New Trier for a long time and I feel fortunate that we were given an opportunity to actually have a season and play in a regional and sectional, but this team is state-caliber,” Trevians coach Scott Fricke said. “This is a team that would’ve competed for a state championship. They did everything they could this year, they won every match, they won the regional, they won the sectional, so they did everything they could control, and I was proud of them for it.”

Because of COVID-19, the high school golf season, like many other fall high school sports, looked like nothing anyone has seen before.

Many schools didn’t have a chance to travel to different invitationals or often play 18 holes. And of course, there is no IHSA state championship.

“These girls knew all year, even though a state championship was going to be a remote thing, they stayed focused and they worked hard in practice every day,” Fricke said. “They didn’t let all the distractions take them down. I do wish they were given a chance to win it all.”

Despite all of that, the Trevians battled all year, including in a sectional tournament where significant winds affected play. The golfers noted how the back-nine played more difficult because of the wind and fast greens.

New Trier finished with a collective score of 314, 24 strokes ahead of runnerup Loyola Academy (338).

The Trevians scores was the third best among the four sectional tournaments played Tuesday, just behind Stevenson (311) and Hinsdale Central (312).

New Trier senior Audrey Tir, who was the regional champ with a 76, also won the individual sectional crown with a 74, but it didn’t come easy.

Tir bogeyed her final hole to finish 6-over-par, two strokes off the lead when she finished. She tied for the lead after Glenbrook South’s Maria Perakis and Geneva’s Reese Clark fell 6-over after 16 holes, and Tir won the tournament after Clark (76) and Perakis (77) felt the difficult of the final two holes.

Tir was watching the final group finish play but was not watching the scoreboard. She was not immediately aware of her contention.

“I actually didn’t know how I was doing in the rankings,” Tir said. “I was too scared to look at the scores so I had no idea.”

New Trier sophomore Amy Beanblossom tied for second by shooting a 75 while junior Carter Sichol finished tied for sixth, scoring a 79. Olivia Siebert rounded out New Trier’s scoring with an 86, while Siara Patel and Peyton Sichol finished with an 87 and 90, respectively.

Junior Laine Rutkowski and freshman Katie Morgan led the way for the Ramblers, each carding an 82.

Teammate Caroline Magner finished one stroke behind at 83 ,while Katie Suk, Kendall Beil and Bailey Bitbabo scored 91, 92 and 93, respectively.

Loyola coach Katie Hickey was pleased with the way her golfers performed amid the tough circumstances, finishing with some lower scores than usual.

Hickey knew it was a unique and odd season and she was proud of how her golfers responded.

“We had a great group of girls all rooting for each other with strengths in some areas,” Hickey said. “Laine was a clutch player for us this year and given the COVID, I think they were just happy to play.”

For both New Trier and Loyola, that was the sentiment: They were happy to play.

New Trier made it a goal to have as long of a season as it could. The golfers wore masks at every moment, even when it wasn’t necessary. Even when the rules changed midway through the season, they continued to do their part in hopes of making sure they could go as far as they dreamed.

While the Trevians didn’t get a chance to play for a state-championship trophy, all they did was win every single match they played.

“We know we have a really strong team because we have the same team and we got better,” Siebert said. “It does hurt that we didn’t get to go to state but I’m still proud of this team.”