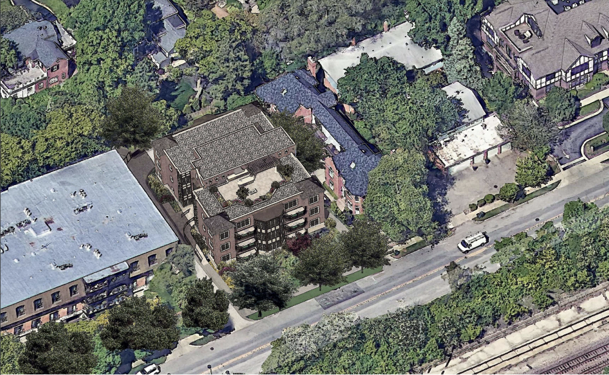 Winnetka's Planned Development Commission will hold a second public hearing Oct. 19 on a proposal that calls for the construction of a new six-unit multi-family residential building with below grade structured parking at 688‐694 Green Bay Road. | Graphic courtesy of the village of Winnetka

Locals interested in the latest proceedings on a proposed six-unit multi-family residential building development project in Winnetka will have to wait a little longer.

The proposal, submitted by Walden Winnetka LLC, calls for the construction of a six-unit, multi-family residential building with below-grade structured parking at 688‐694 Green Bay Road.

The six condominium flats, across three stories, would each measure approximately 2,200 to 2,400 square feet, according to village documents.

Under the proposal, vehicular access to the site would be provided by one driveway that runs along the southern property line. The project includes a dozen enclosed parking spaces for unit owners and two guest parking spaces at the back of the site, according to village documents.

Plans also include a fourth story that would consist of owner storage space and a common indoor lounge area as well as a roof deck and garden.

The units would also include private balconies faced with wood trim and that include iron rails, balustrades and spindles, according to plans submitted to the village.

In communications with the village, the applicant describes the proposed architectural design of the development as English Country Manor-style. Proposed exterior materials would include a reddish/brown face brick and limestone trim. Window frames would be black.

Winnetka’s Planned Development Commission held its first public hearing on the potential project in early September, during which both residents and commissioners raised several questions, and some corners, with the development.

Several neighbors of the proposed subject property spoke in opposition of the project, citing concerns about the height and mass of the building, potential stormwater impacts, the impact of noise and light on their properties and a potential impact on nearby property values.

Some residents who commented during the first hearing did signal support for the project, citing their perceived demand for a condominium project in Winnetka.

The applicant’s revised proposal, found in plans submitted to the village, leaves many elements of the potential project the same.

Changes that were submitted largely relate to the project’s fourth level, David Schoon, director of community development, told The Record. He said the major changes were related to the floor area of the enclosed structure components that would have storage and the community room for the residents of the building. The configuration of those components were altered and subsequently made smaller, Schoon added.

A parking study conducted by Kenig Lindgren O’Hara & Aboona Inc. found the development would be well served by the existing surrounding roadway network. The proposed development will have a low traffic impact on area roads based on the low volume of traffic estimated to be generated, the study says.

The number of people who can gather at Village Hall for viewing is limited because of social distancing guidelines, so guests will be accommodated on a first-come, first-served basis. Call-in and zoom information will be available to the public days before the meeting.