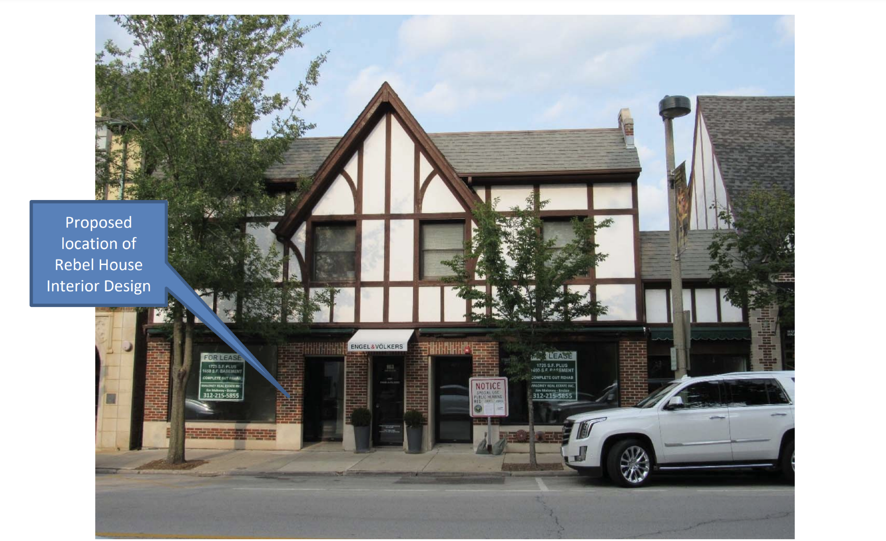 The Winnetka Village Council approved an application from Rebel House LLC, the interior design company owned by Glencoe residents Michael and Marli Kreuser, that will allow them to open a design office on the ground floor at 901-905 Green Bay Road. | Graphic courtesy of the village of Winnetka

With years of experience in the design profession, Michael and Marli Kreuser are used to bringing people’s design dreams to life.

The Winnetka Village Counci brought life to the latest vision from the pair of designers during its regular meeting Tuesday, Oct. 6, when council members approved an application from Rebel House LLC, the interior design company owned by the two Glencoe residents.

The approval will allow the Kreusers to open an office on the ground floor at 901-905 Green Bay Road.

Under the approved proposal, the company will be relocating its office from Chicago’s Ravenswood neighborhood to the approximately 1,700-square-foot space at 901-905 Green Bay Road, according to Village documents.

Rebel House’s staff currently has four members, according to its proposal, which also states two team members would commute together — and would obtain and use the village’s required Zone A Business Employee Parking Permit — while the other two would use public transportation.

The design company would on average have 1-2 clients or vendors visit the site per week, the proposal says. Proposed hours of operation are 9 a.m.-5 p.m. Monday-Friday. The company’s current plans call for no regular retail hours and instead say it would service retail clients by appointment.

Village staff determined a parking study was not necessary given the low amount of client and employee parking demand generated by this proposed use.

The subject property is currently vacant, per village documents. But a real estate office, Engel & Völkers, occupies space on the second floor above the unit.

Winnetka’s Village Council, in September of 2019, approved an ordinance that granted a special-use permit to allow Jeannie Balsam Interior Design to operate an office in the space, according to village documents. The company did not ever take occupancy of the subject property, officials say.

Michael Kreuser told the council that the previous applicant, although it never occupied the space, had done work to make the space “very compatible for what we were looking at and trying to do.”

“It kind of ended up being a very serendipitous connection point where we were looking for the right spot and it seemed like this was it,” he said.

Michael added that the company is excited to have the chance to join the Hubbard Woods Design and Dine District, adding “we felt like we had a really good chance to become a part of this and bring some new energy.”

Village trustees signaled support toward the proposal during the council’s 20-minute meeting and ultimately approved the ordinance via a unanimous (Village President Chris Rintz was not present) vote.

“Great things are happening in that area, and it’s just fun to watch that it’s happening organically and it just seems to really feed on itself,” trustee Andrew Cripe said. “I think there’s a great future in that area.”

Winnetka’s Plan Commission unanimously recommended approval of a special-use permit allowing the proposal during its regular meeting on Sept. 23. The cpmmission heard from the applicant and property owner, and received nine written communications from the public signaling support of the request.

“We see this as a really amazing opportunity to cement ourselves in the community as both a great neighbor to the people that live there and a great service provider as well,” Michael Kreuser said.