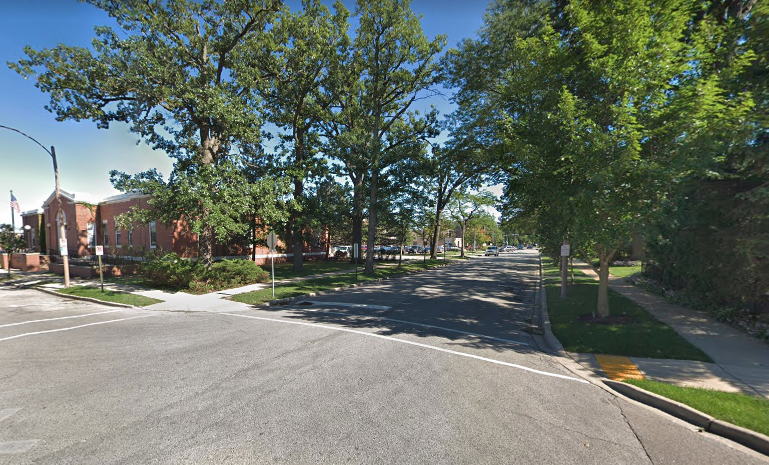 The incident began on Park Avenue near Central Avenue and continued just outside the Wilmette Post Office on Sept. 29. | Google Streetview

A verbal altercation escalated into a racist outburst in the middle of Wilmette’s Park and Central avenues on Tuesday, Sept. 29, according to a report from the Wilmette Police Department.

In the report, obtained by The Record via a public-records request, two individuals tell their sides of a story that includes the use of the
n-word, reportedly up to seven times.

While the names of the involved individuals are redacted from the report, Cmdr. Michael Robinson said a Black male and a White male were involved. Neither, he said, wished further police involvement, and no charges were filed.

According to the report the men were walking on opposite sides of Park Avenue near the Wilmette Post Office around 12:45 p.m. Each man, the report states, thought the other was staring at him.

When the Black male reportedly stopped and waved in response, he told police that he heard the White male mumble a racial slur, causing the Black man to ask “What’s your problem?” and begin to cross the street.

While he was crossing the street, the two men were allegedly shouting at one another, with the White man, who was walking his bike, reportedly calling the other man an n-word “at least six times.” The Black man allegedly made a sexual comment about the White man’s mother.

The man crossing the street told the other man that if he called him a racial slur one more time that he would physically assault him, according to the report.

The White man then allegedly picked up a bike chain and “began to swing it,” while the Black man told police that he “stood his ground” and wrapped a sweater around his arms and wrists for protection.

Robinson said it is not clear if the chain was being used in a threatening manner.

“The subject had a bike chain in his hand but, according to him, he was just locking up his bike,” Robinson said. “According to the other it could have been perceived as a weapon.”

When the White man walked to and went inside the post office, the Black man told police he knocked over the man’s bike and spilled water on it. The White man told police that he saw this and came outside, where he cussed at the man and called him the n-word.

The last epitaph was heard by at least two other witnesses, who reportedly helped separate the two men until police arrived. It is unclear who called the police.

Robinson said that since neither individual was interested in police involvement, the case was closed. No one was reported injured during the incident.