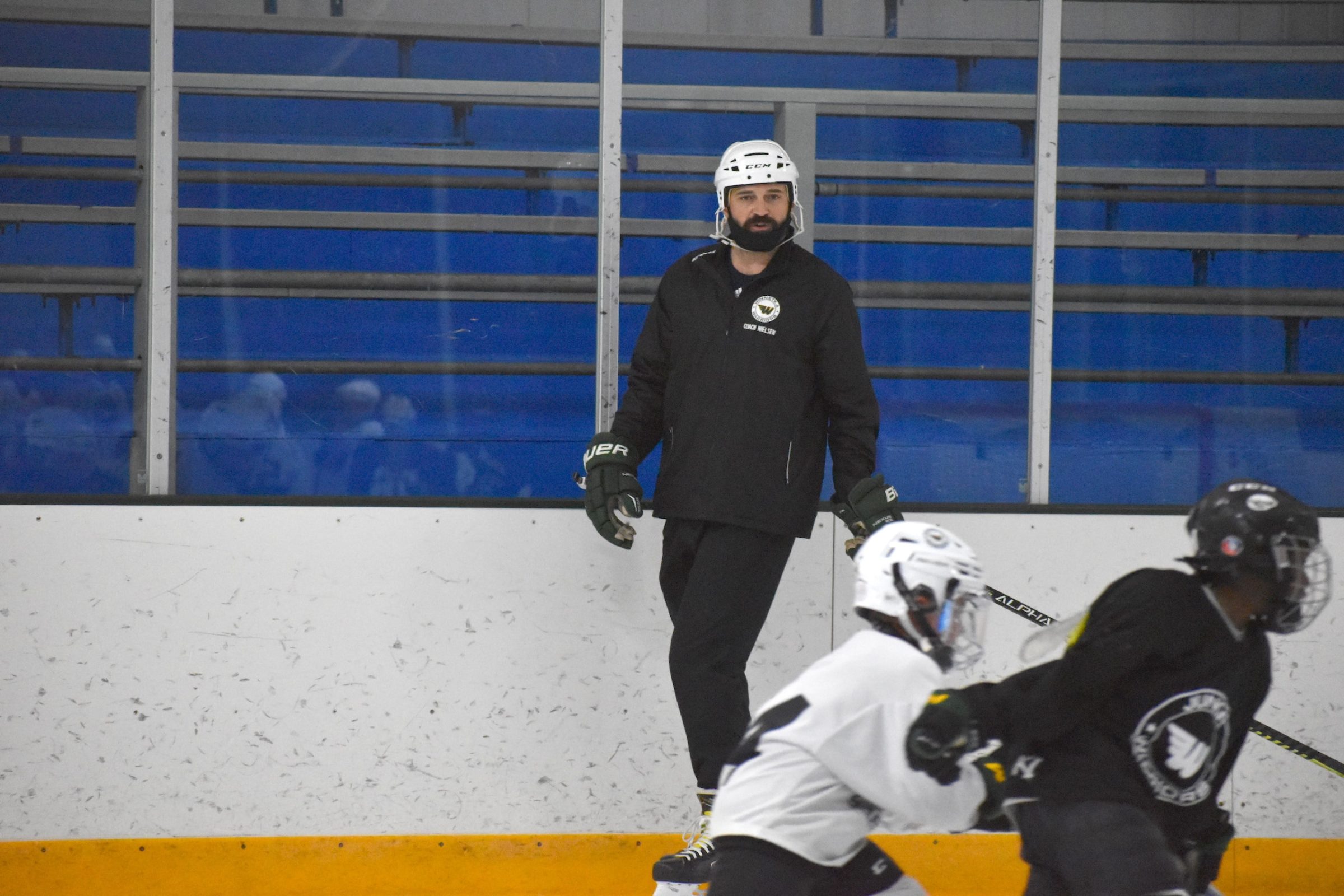 Evan Nielsen skates with some Winnetka Warriors players at a practice in September. | Joe Coughlin

The former professional hockey player has skated on rinks all across the country, so his analysis carries weight.

“There are so many friends I played with and against (at the Winnetka Ice Arena),” he said. “And it’s the same rink. Best ice on the North Shore.”

Maybe that’s what brought him back — that and the chance to lead one of the most prestigious hockey organizations around.

Nielsen was hired this summer as the hockey director for the Winnetka Warriors Hockey Club, which dates back to the early 1970s, boasts alumni like NHL talents John Moore and Blake Sloan, and currently guides more than 700 youth players.

At first, Nielsen was not a candidate for the position but a reference.

He was contacted by club board member Matt Passen — whom Nielsen knew from their years playing youth hockey on the North Shore — for ideas as the club searched for a hockey director.

Passen was not aware that Nielsen was local and available, as Nielsen had moved back to Evanston after a decade of teaching prep school and coaching hockey on the East Coast. After thinking of potential candidates, Nielsen thought, “why not me?”

“So we got the ball rolling,” he said. “It was fortuitous.”

Nielsen began competitive hockey in Evanston and played around the North Shore before joining the Chicago Young Americans, a prestigious youth-hockey training ground out of Lincolnwood.

From there, Nielsen began high school play with Evanston High before enrolling in a prep school. He played collegiately at the University of Notre Dame and then was drafted by the NHL’s Atlanta Thrashers in 2000. After two years of professional hockey, Nielsen hung up the skates.

“There was a little concern for long-term health. I gave two years and maybe was not going to make it,” he said. “It was time to devote my time and energy toward something else. It was exciting but a little bit daunting. So much of my focus had been hockey for so long.”

But Nielsen had confidence in his education, so he tried some things: sales, finance, the New York Yankees (in the front office), but his time mentoring young people (as a player and volunteering with Big Brothers Big Sisters), pushed him into education and coaching.

After a decade doing so out east, fortune brought him back to the North Shore and the opportunity with the Winnetka Warriors.

Aside from the obvious experience, Nielsen brings to the youth program a focus on fundamentals and joy. And fundamentals start with movement.

“The … core foundation skill is skating, for everybody 8 or 14,” he said. “If you can’t move and don’t have the balance, you won’t be able to do the next level of stick handling. Balance and skating is at the foundation of everything we do.

“I know from my experience. If you can get around, you can play. You can work on other things, but if you can’t keep up, you won’t be able to play at the next level.”

And then there’s joy, which has been trickier in 2020 as all organizations navigate the COVID-19 pandemic and the restrictions that come with it.
The Warriors are getting on the ice, Nielsen said, as the teams are chosen and practice multiple nights a week.

“Hockey should be fun first and foremost,” he said. “It is an enjoyable experience.

“I think about the experiences I’ve had, background growing up in the area, playing for community-based organizations. … This is a season like no other. There are challenges and opportunities. The kids are really happy to be on the ice, be with their friends. It’s a nice respite from the uncertainty going on in the world right now.”