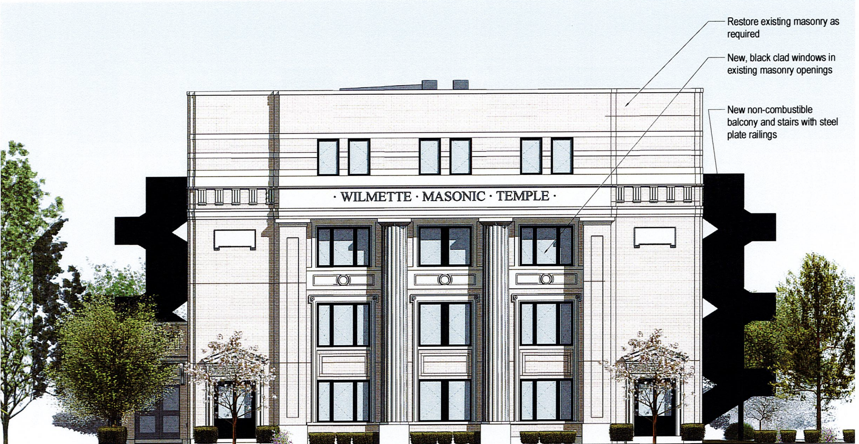 Wilmette officials approved a project that will redevelop the signature Masonic Lodge property, located at 1010 Central Ave., into 16 apartment units for people aged 55 and over. | Graphic courtesy of the village of Wilmette.

Nearly 100 years after it was first constructed, one of the long-standing fixtures of Wilmette’s downtown area is in for an overhaul.

Wilmette’s Village Board approved a redevelopment proposal in late August that will repurpose and remodel the Wilmette Masonic Lodge into 16 apartment units for people aged 55 and over.

The Masonic Lodge property, located at 1010 Central Ave., is a 21,500-square-foot, four-story building built in 1925, according to Village documents. The building, until recently, was owned and operated by the Masons (Wilmette Park Lodge No. 93) and used primarily for private functions.

A development group, BK Wilmette Lodge LLC, purchased the property approximately three months ago, according to Steve Blonsky, who is part of the ownership group behind the project. Blonsky declined to comment on the sale price of the building; however, according to online records, the building sold for $1.5 million on July 20.

The redevelopment project plans will keep the building’s prominent exterior largely intact, Blonsky told The Record, adding “there was never a thought to tear the building down.”

Modifications to the building structure consist of changing window openings and adding exterior metal decks and exterior stairs on the east and west sides of the building, according to documents submitted to the village detailing the project. Minor changes to the front facade facing Central Avenue are also planned.

Although exterior changes are minimal, interior work will be more substantial as plans call for taking the existing interior “down to the walls,” Blonsky said.

Each of the building’s four floors will include four of the three-bedroom, two-bathroom units, according to the approved plans. The 16 apartments will be rental units.

The development team is planning to provide 18 parking spaces for the 16 units; however, because the provided spaces are not enclosed spaces, they required zoning relief, according to John Adler, director of community development for the Village of Wilmette.

Adler said given this building and the difficulty of trying to put enclosed parking on the site, it made sense for the village to grant that variation.

A traffic study and parking analysis concluded this use would provide no real uptick in traffic and would be less intense than the previous use of the property, per village documents.

Blonsky said preliminary demolition on the interior work of the project is scheduled to begin in early October, following final submission of building permits. He estimates a 12-month timeline for completion, with the hope the project is finished by the fall of 2021.

Aside from some fine tuning of details surrounding parking, the project received little contention while progressing throughout the proceedings leading to its approval, Adler said. A key reason for that was the project’s plan to keep the well-known structure intact.

Adler said maintaining the building’s character and its front facade was a top priority for the village when prospective developers discussed reuses of the property.

“What’s also nice is that we’re adding density near our village center, so that more people can walk and utilize the services and patronize the businesses there so that was also a real positive,” Adler said.

Blonsky, who was also a part of the team behind the redevelopment project at 1121 Greenleaf Ave., believes this reuse of the property will improve the community.

“This building has been vacant for close to 20 years, so with 16 new apartments, we’re hoping that it really brings a nice addition to downtown Wilmette,” he said.

“We’re very excited, and we’re ready to bring this underutilized building and make it an integral part of the community.”