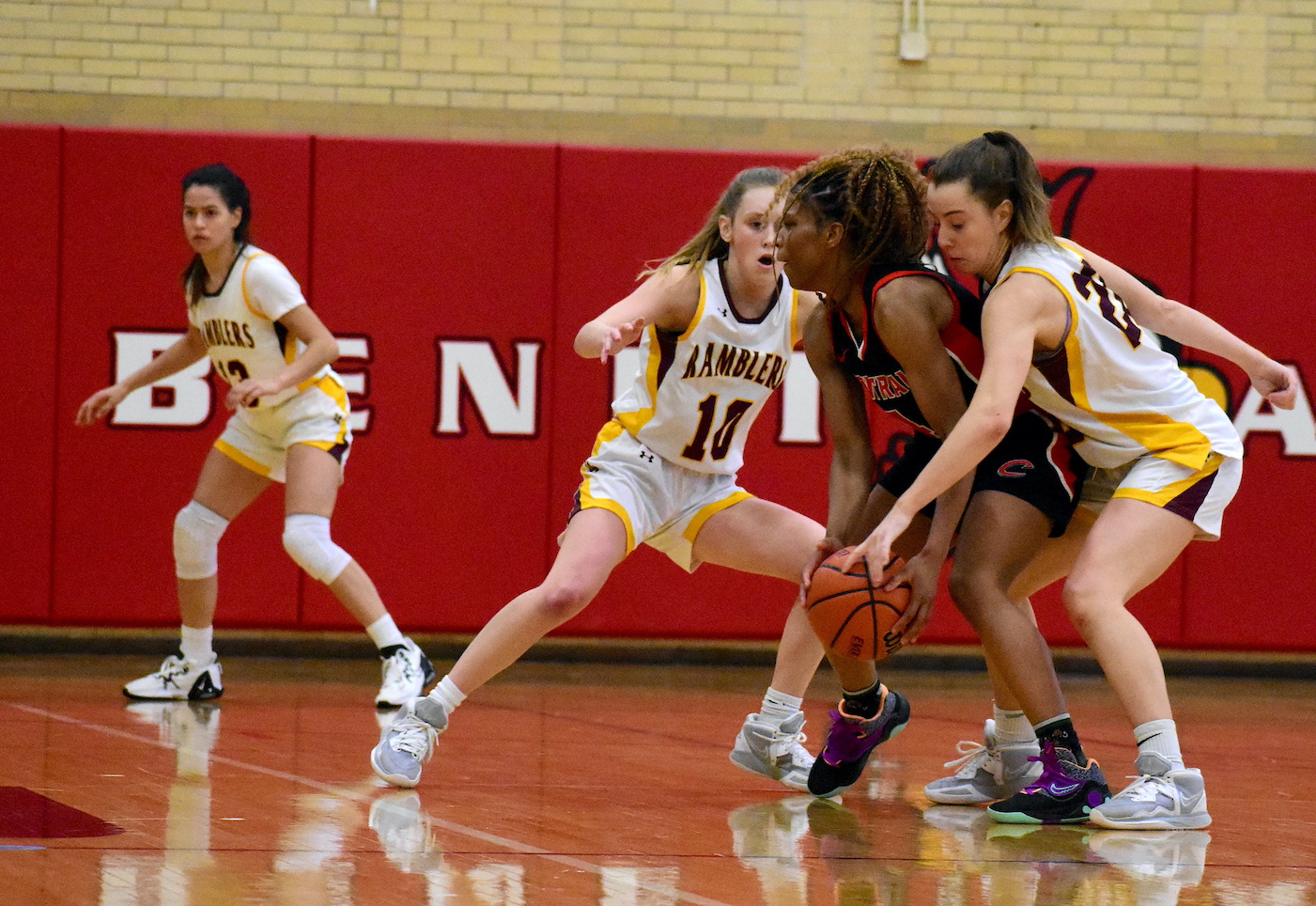 Loyola Academy sophomore Grace Bronski summed it up: Azyah Newson-Cole is a problem.

With 12 second-half points, the Lincoln-Way Central senior guard spearheaded the Knights’ 42-35 comeback victory over the Ramblers on Monday, Jan. 16, at Benet Academy.

“As soon as they started pressuring us, we got very chaotic, I think,” Bronski said. “That was probably our biggest flaw in today’s game. And (Cole) is definitely a problem. She’s very good, very talented.”

The shootout matchup was the opener of the final day of the 33rd Annual Coach Derril Kipp’s Hoopsfest, a four-day girls basketball showcase in the western suburbs. It was also Loyola Academy’s fourth game in less than four days.

The Ramblers — who won two games (Kenwood, Minooka) on Saturday and lost one (St. Ignatius) on Friday — grabbed control of Monday’s contest early, taking a 14-8 lead after the first quarter.

Loyola increased its lead to as many as nine, 24-15, thanks to a the play of two key reserves: Morgan Bruno and Bronski, who combined to score 16 of the team’s 26 first-half points.

“I felt we had four of five good possessions to come out (of halftime) and we don’t hit any of the shots,” Loyola coach Jeremy Schoenecker said. “The started taking all the momentum.”

A three-point play from Bronski got the Ramblers the lead back but it was her team’s only points in the third quarter.

The Knights kept at it to start the fourth quarter, going on a 9-0 run to start the final period and taking a lead it would not give up.

“Their pressure really ended up getting to us in the second half,” Bronski said. “I think it was definitely a game we should have won. … We weren’t playing together as well today as we usually do. Just stuff we normally execute that we didn’t today.”

The Ramblers’ comeback effort fell flat with missed shots, and LW Central iced a victory with defensive rebounding (Lina Panos: 5 of game-high 11 rebounds in fourth quarter) and free-throw shooting (4-of-5 in the fourth).

Schoenecker said after the busy weekend, fatigue may have struck the Ramblers in the final quarter, but his young team — which scored 65 points in a victory over highly ranked Kenwood on Saturday —  is still searching for offensive consistency.

“Who’s taking the shot, who’s comfortable taking the shot; we’re still super young,” he said. “So in those situations, we’ve said everyone is capable of hitting a shot, so if a shot presents itself, take it.

“It’s been a long 48 to 72 hours; that probably has a little something to do with it down the stretch but that’s an excuse. We have to find a way to gut that win out.”

The Ramblers (17-4) look to rebound on the road against Fenwick on Thursday, Jan. 19, and against Rock Island Saturday, Jan. 21, in the Quad City-Chicago Shootout at St. Ignatius. Nonconference road tests with Prospect (Jan. 23) and Glenbrook South (Jan. 24) loom.