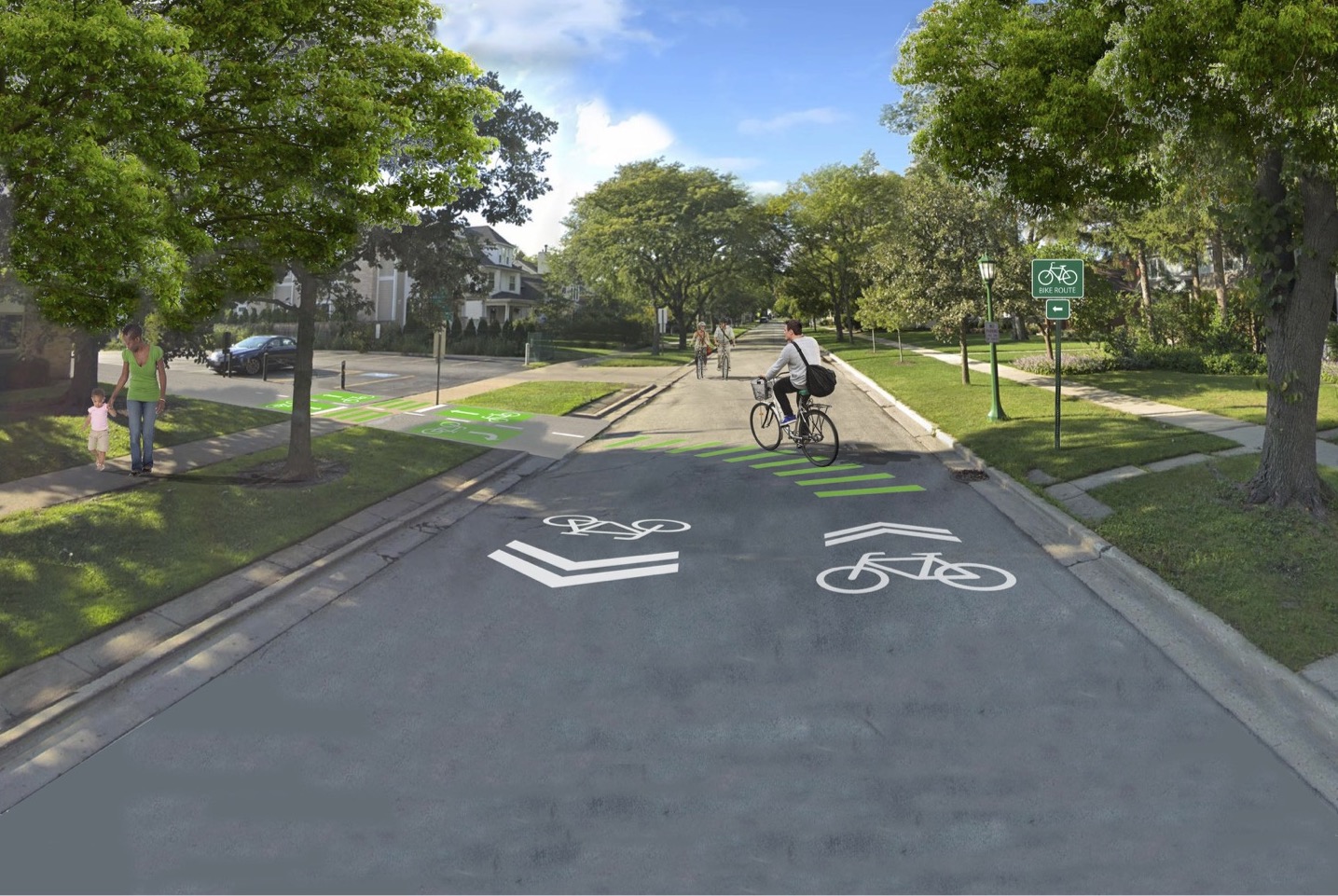 A rendering of shared roadway known as a bike boulevard in Wilmette. | Image Submitted

In 2023, the village will incorporate “bike boulevards” along three roadways — Poplar Drive, Park Avenue, Washington Avenue — while adding safety measures to Sheridan Road. Bike boulevards use signage and pavement graphics and striping to signify a shared space for cyclists on neighborhood streets, often connecting cyclists to points of interest in the community.

“I, as well as the rest of engineering team, am absolutely beyond excited that we are in final implementation phase,” said Brigitte Berger-Raish, Wilmette’s director of engineering and public works. “… Now that we have approved plans momentum is building for what we’ve been planning for several years. It’s really a huge step.”

A year later, in March of 2022, the Transportation Commission OK’d a five-year implementation of that plan starting in 2023. Commissioners agreed to the first-year details on Nov. 16.

Within the next year, the Village will add bike boulevards to:

Additionally, improvements will be made at six street crossings along Sheridan Road.

The bike boulevards will feature shared lane markings (an image of a bicycle with arrows) to begin each block and signage to alert motorists and to direct cyclists.

Poplar Drive boulevard will connect to the similar one on Greenleaf Avenue, a bike boulevard completed early in 2022 to align with other streetscape work on Greenleaf. It will also end near the southern tip of the Green Bay Trail.

On Park Avenue, the bike route will run parallel to Green Bay Road and connect to the Wilmette Public Library, while on Washington, cyclists will be able to pedal to Highcrest Middle School.

The improvements along Sheridan Road are more complicated. The Village’s presentation Nov. 16 detailed the proposed changes — five improved crossings (at Chestnut, Elmwood, Washington, Linden and Michigan) and a new one (10th Street).

Residents in attendance, some from the grassroots community group Bike Walk Wilmette, pushed for further safety upgrades, and commissioners eventually approved five of the six proposals, tabling the crossing at Michigan Avenue near Gillson Park until a conversation is had with Wilmette Park District officials.

The new crossing at 10th Street will include a bump-out for better visibility near the Kenilworth boundary. Officials also agreed to review new materials for crossings that have damaged brick.

The Village floated the idea of removing the center two-way turn lane on Sheridan, but commissioners believed the lane was a helpful safety measure to calm traffic turning into residential driveways along the roadway.

The commission also back in March approved feasibility studies for bicycle improvements on Ridge Road and near Wilmette Avenue and Glenview Road. Those studies will be conducted in the first quarter of 2023.