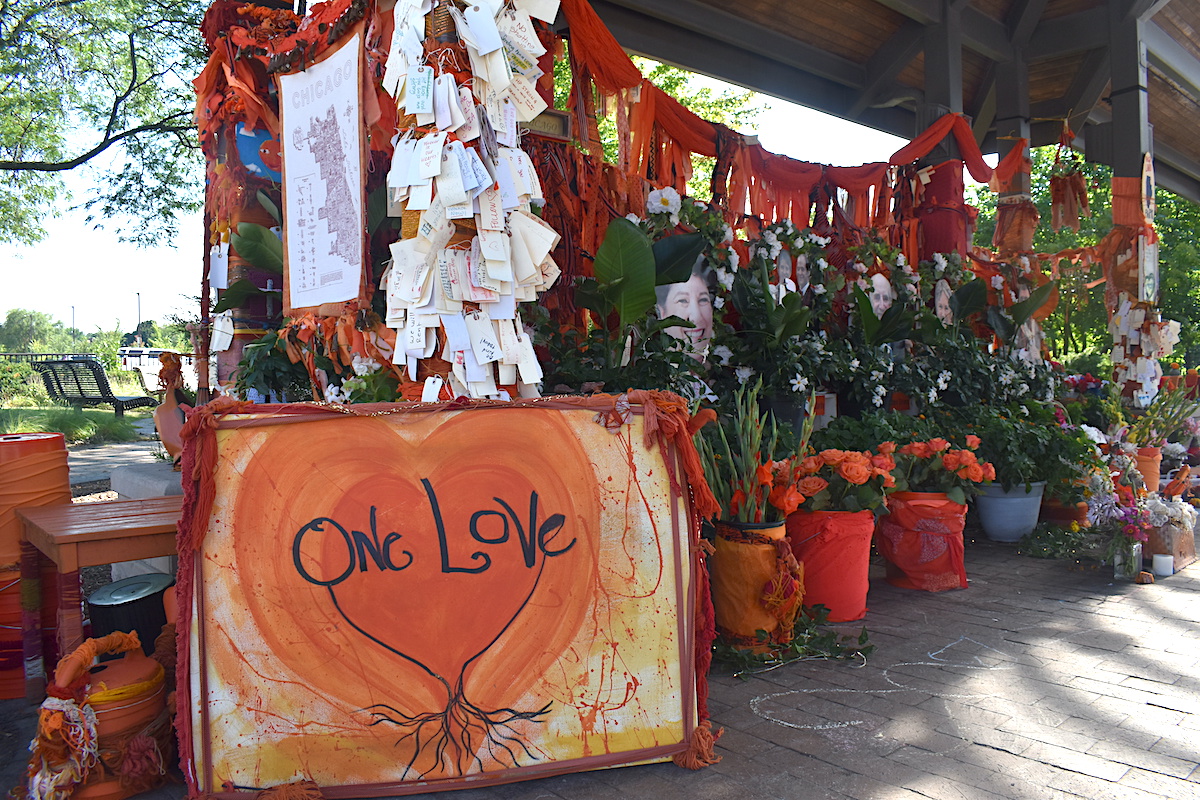 The memorial at Central and St Johns avenues in Highland Park will be gone by Tuesday, Oct. 18, in preparation for the new location and format.

A temporary memorial to the victims of the July 4 mass shooting in Highland Park will include remembrance plaques and a new access path to the rose garden near City Hall, city officials announced in an email on Thursday, Oct. 13.

The message followed up on the the City Council’s Sept. 28 decision to move memorial items away from St. Johns and Central avenues, which organically became a place of reflection in the days and weeks following the attack.

Seating and an “all-season” walkway will be installed for access to the memorial, which will be open to the public on Saturday, Nov. 5, according to city officials, who on that morning will place flowers at St. Johns and Central avenues with an invitation for residents to bring the flowers from there to the rose garden — about 400 feet to the south.

By Nov. 3, a plaque reportedly will also be installed at Central and St. Johns to honor the victims and provide information about the memorial at the rose garden. At the intersection, memorial items will be removed and surfaces cleaned by Tuesday, Oct. 18. According to the City, two of the victim photographs will remain at Central and St. Johns until Nov. 3, the Day of the Dead, at the request of the victims’ families.

Memorial items from that location reportedly will be transported to the Highland Park Public Library, where an archivist will review them. After that, families of the victims “will be invited to review items and keep what they wish.”

The families were also significantly involved in other details of the temporary memorial and plaques, which “reflect the wishes of each family.”

The art installation — the orange ribbons, tags and messages that accompanied the memorials — is also being removed and may appear at a new site unrelated to the City of Highland Park.

In the rose garden, the City will remove the “Antelope” sculpture to storage and future evaluation on restoration and relocation. Access to the Kindness Rock Garden, which opened on Oct. 8 adjacent to the rose garden, will not be disrupted, according to officials.

In related news, the City of Highland Park has decided to cancel its formal tree lighting ceremony, which is traditionally set in Port Clinton Square.

“Following advice from experts at the Department of Justice, feedback from victims and their families, and input from staff, the City has made the difficult decision to cancel the holiday lighting program at Port Clinton Square,” it says in the emailed message.

The City continued that the holiday lights will be lit through the season, but officials are looking for a new location for the holiday tree and menorah.

The Heart of the Holidays event series, however, will return on Nov. 19 and 26 and Dec. 3 and 10 in downtown Highland Park.