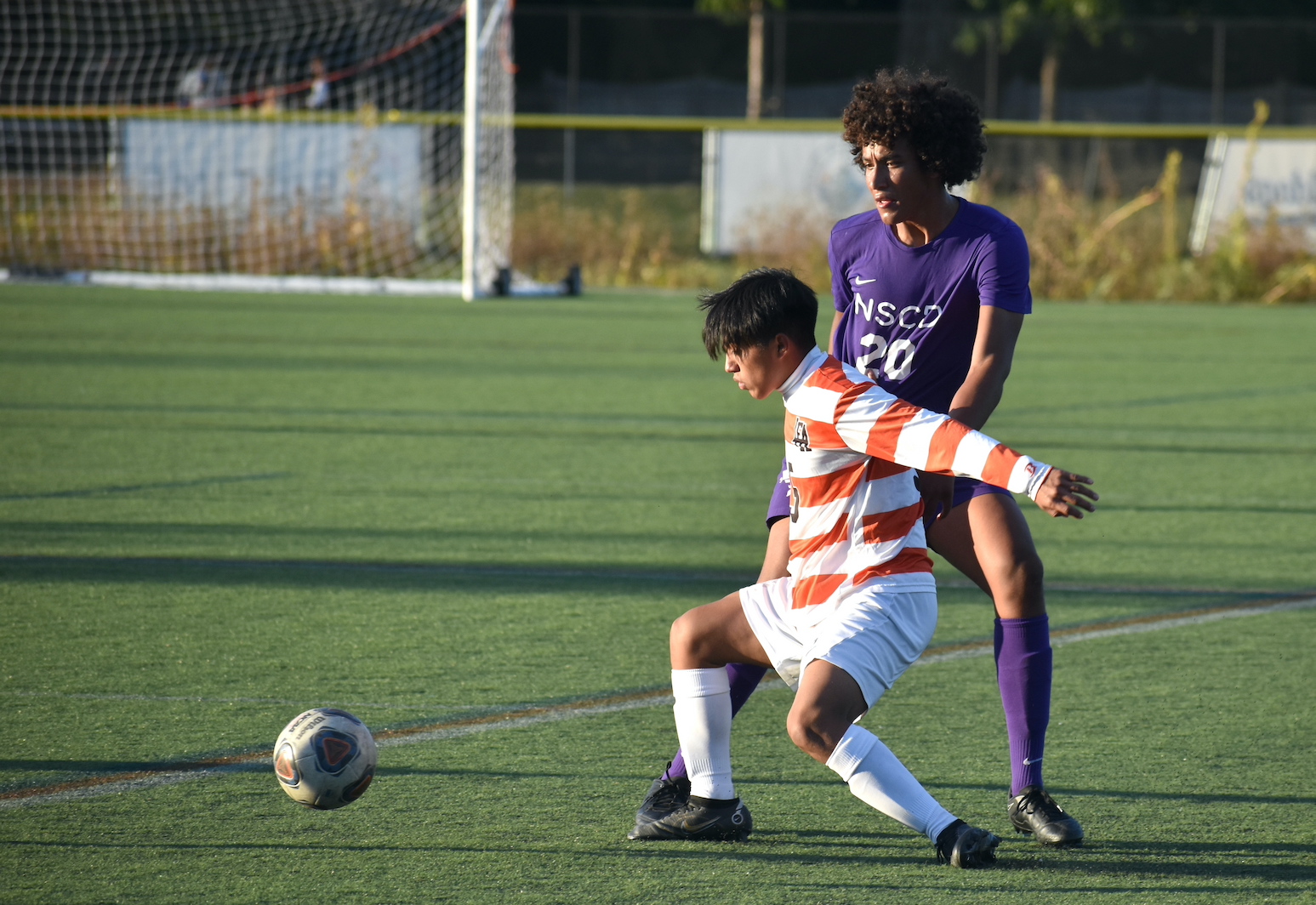 The Raiders Leif Steele (20) is pushed off the ball by a Lake Forest Academy player during the teams' conference clash Friday, Oct. 7, in Winnetka. | Photos by Joe Coughlin/The Record North Shore

The start of the 2022 postseason on Wednesday, Oct. 12, will be interesting for North Shore Country Day boys soccer.

Because they are the sectional’s top seed, sure, but more interestingly it will be the first game the Raiders play following a loss.

Previously 18-0-2, NSCD picked up its first loss on the season Friday, Oct. 7, when Lake Forest Academy came to Winnetka and left with a 3-1 victory and a Independent School League championship.

“I am interested to see how we respond because we haven’t lost all season,” Raiders coach Kyle Jones said following the defeat. “We’ve been grinding these wins out. We still feel confident that we can make a good run. We’re not going to let (the loss) affect our confidence. I couldn’t be prouder of these guys and what they’ve accomplished this season. We’re excited to go again this week.”

LFA (14-4-2) and NSCD entered Friday with similar seasons. Both teams touted unbeaten records in the ISL — they even tied, 0-0, in their first meeting.

The Raiders tallied the first score in the season series, going up 1-0 in the first half. But the Caxys fired right back and took the wind out of the Raiders’ sails.

“The most disappointing thing was to concede a goal right after we scored,” Jones said. “We scored a great goal and had the momentum and to have it drained right away was tough.”

LFA added a pair of goals and fended off a couple NSCD chances in the second half to secure the road win.

The Raiders other tie on the season came against Notre Dame in late August. Other than that, NSCD earned 18 victories, including six one-goal wins.

Jones said it all starts with the Raiders defense — led by Tae Won Lillig, Buckley Oelerich and goalkeeper Aram Dombaglian — but the entire team has put it together.

“Defensively we’ve been great. … They’ve given us a solid foundation where we haven’t conceded many,” he said. “We’ve defended well, but across the board we’ve been good. These guys have a unique way of grinding out results and victories and we hope we can continue doing that next week.”

The Raiders begin the postseason against Ida Crown, the No. 10 seed in a subsectional of the IHSA Class 1A Cristo Rey St. Martin Sectional. The regional title is set for 4 p.m. Friday, Oct. 14, at Skokie Playfields.

The sectional’s other top seed is Latin, which the Raiders topped 2-1 on Sept. 2 and 3-1 on Sept. 27. Last season, North Shore Country Day was halted by Latin 3-1 in a sectional semifinal. Wheaton Academy won the 2021 Class 1A championship with a 2-1 win over Althoff Catholic.