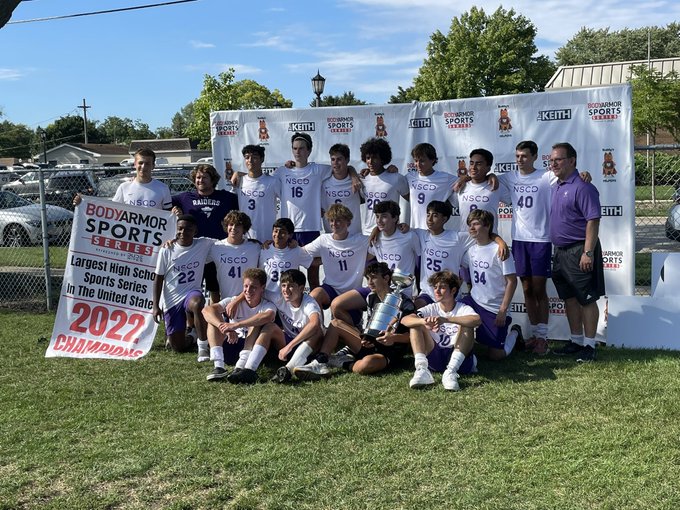 Cole Driscoll and Wyatt McAlexander each found the back of the net as the Trevians earned the fire hydrant trophy on Wednesday, Sept. 21, in Northfield.

Thomas Terry, a sophomore, earned the shutout in goal for New Trier (10-1-2).

Thatcher Smith’s goal propelled the Raiders (13-0-1) to the league victory on Wednesday, Sept. 21.

Matthew Perchik scored off an Oliver Fernandez assist to for the Trevians on Saturday, Sept. 17.

Teddy Gallun and Tae Won Lillig tallied the goals as the Raiders won their bracket of the Body Armor Tournament on Sunday, Sept. 18.

Jack Jaworski added a goal and an assist for New Trier.

Peyton Bertsch racked up 10 kills as the Panthers swept the Caxys on Tuesday, Sept. 20, in Wilmette.

Amy Beanblossom finished three under par (69) to earn the individual conference championship on Wednesday, Sept. 21, leading the Trevians to a second-place finish behind Glenbrook North.

Grace Leber tied for ninth with an 82 and Alexa Green was 12th with an 83 for New Trier.

Maggy Shaw shot a 93 to finish fifth and earn All-Conference honors for Regina Dominican on Wednesday, Sept. 21, at Harbor Side in Chicago.

Tyler Greehspahn and Oliver Barr each shot a 73 to aid the Trevians.

Aiden Landes carded a 74 and Alex Finger a 76 to lead Highland Park to first place in the conference tournament on Wednesday, Sept. 21.

Alex Creamean’s 72 was the low round of the day for first-place New Trier on Saturday, Sept. 17, at Steeple Chase in Mundelein. Will Leber added a 73 for the Trevs.

Andrew Southwell shot a 73 to lead Loyola Academy to the second-place finish. Joey Pieracci chipped in a 75 for the Ramblers.

Kat Schuenzel picked up a 6-1, 6-1 victory at second singles to help the Panthers to the team win Thursday, Sept. 22.

Joey Papanicholas, Kyle Fix and Felix Hekster finished 3-4-5 to pace New Trier to the meet victory at Adler Park on Saturday, Sept. 17. James Flynn and Andrew Hepner were 7th and 8th, respectively for the Trevs.

Belle Oviedo, a freshman, medaled with a 19th-place finish for Highland Park, which finished sixth overalll.

Aramis Thai-Garcia and Owen Keyt finished 28th and 29th respectively for North Shore Country Day, which placed 10th out of 20-plus teams at the meet on Tuesday, Sept. 20, at Legion Park.