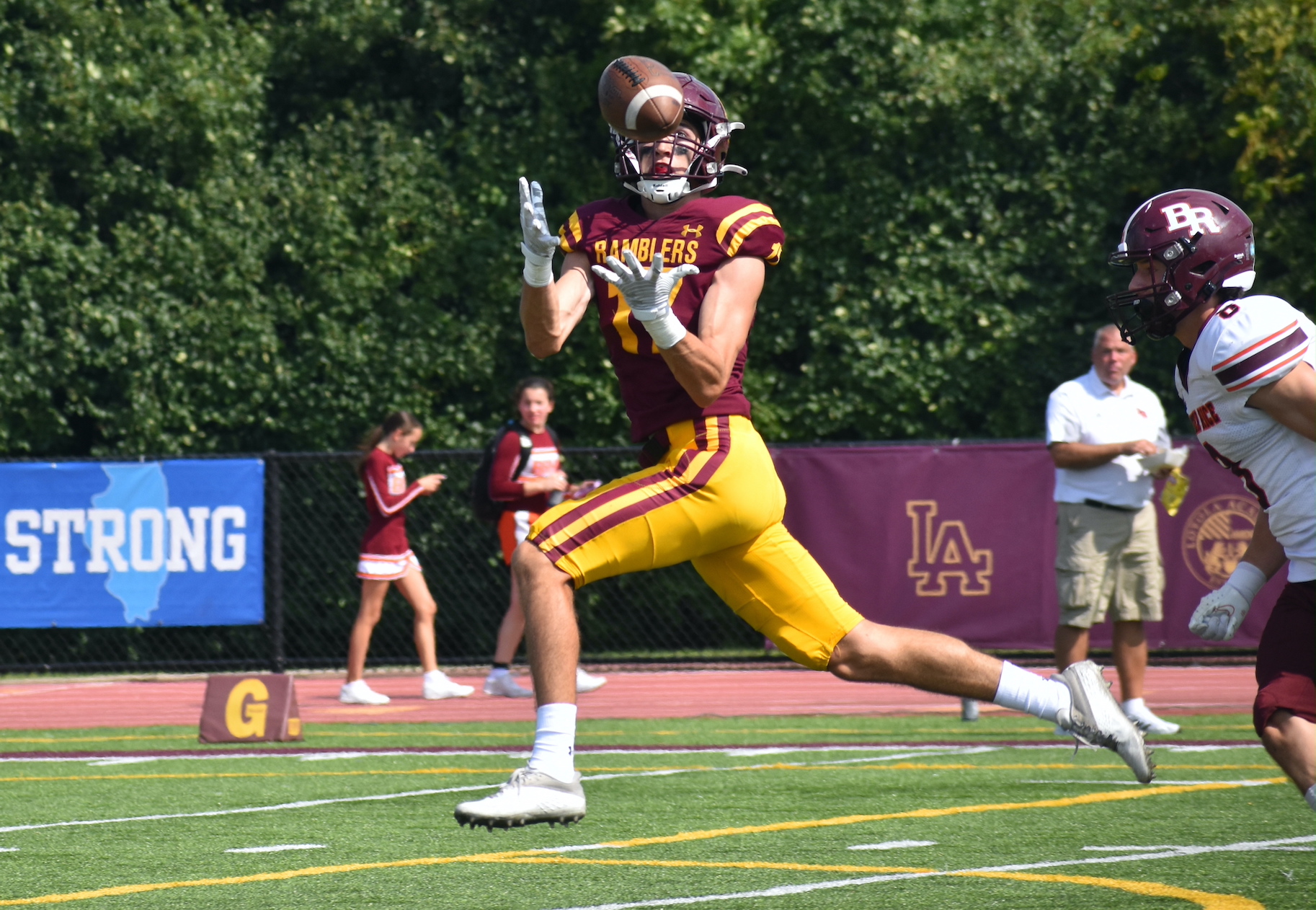 Declan Forde readies to haul in a pass from Jake Stearney that went for a 48-yard touchdown Saturday, Sept. 17, in Wilmette. | Photos by Joe Coughlin/The Record North Shore

“The game should not have been that close,” the consummate perfectionist Loyola coach John Holecek told his undefeated Ramblers after they swamped Brother Rice in a 57-21 touchdown tidal wave on Saturday afternoon, Sept. 17, at Hoerster Field in Wilmette.

Even though this Chicago Catholic League Blue Division opener was the second most lopsided of the Ramblers’ four overwhelming triumphs this season, Holecek was unhappy because the Crusaders’ junior quarterback Ryan Hartz threw touchdown passes of 29, 21 and 19 yards, enabling them to score more points than any other opponent.

“We didn’t play very well on pass defense,” Holecek complained. “Our defense gave up many more than I thought we should have.”

Loyola, however, also made some big plays on defense that the offense parlayed into touchdowns.

Junior linebacker Colin Scheid’s interception and 13-yard return halted a Brother Rice drive into the Ramblers’ territory and led to their third touchdown.

Senior defensive back Ty Ottoson leaped high into the air to pick off a pass at midfield in the third quarter, providing the preface for the drive for the sixth Loyola touchdown, and earlier in the game he made another outstanding play to break up a sideline pass in front of the Brother Rice bench.

Junior linebacker Jack McGrath recovered a Crusaders’ onside kick at the Ramblers’ 48, leading to their seventh touchdown and, after the Ramblers’ only punt of the game, senior Jake Devine recovered a fumble at the Crusaders’ 26, providing the preamble for their final touchdown with less than three minutes to play.

The Ramblers’ pass defense lapses notwithstanding this mismatch also was in stark contrast to last year’s meeting in which Loyola had to go all out to win 46-43. (In the postseason, both teams lost in the IHSA semifinals — Loyola in Class 8A and Brother Rice in 7A.)

Senior linebacker Emmett McCarthy called Saturday’s game “our first true test” and he believes the pass defense problems will be corrected: “We’ve got to work on a few things, communication and stuff like that.”

For Brother Rice’s new coach, Casey Quedenfeld, his first encounter with Loyola was a horror show.

While his team (2-2) occasionally found the leaks in the Ramblers’ pass defense, his own secondary was hit with a tsunami.

In the first half, Loyola senior quarterback Jake Stearney hurled a pair of 48-yard TD passes to senior wide receiver Declan Forde and another for 7 yards to senior tight end Jack Parker. And in the third quarter he found Forde on a 33-yard scoring play.

In the third quarter, Stearney threw to Parker for a two-point conversion and in the fourth quarter senior backup quarterback Luke Collins connected with senior wide receiver Danny Herbert for a 15-yard TD.

As they’d done in their previous games, the Ramblers struck early and often and never were threatened.

Forde’s first touchdown catch came with the game only 63 seconds old, sophomore Drew MacPherson ran 8 yards for the second with 43 seconds to play in the first quarter, and Forde’s second TD was scored with 2 minutes 43 seconds elapsed in the second quarter.

“Our offense showed up and scored some points,” Holecek said. “If someone is going to give us 21 right away, we’re going to be tough to beat.”

The closest the Crusaders could come was within 14 points with 6:36 to play in the first half and again 63 seconds prior to intermission.

Stearney finished with 16 completions in 28 attempts for 286 yards and threw 1 interception, while Hartz was 16-for-34 for 211 yards and had two of his passes intercepted.

Forde was the game’s top receiver with 5 catches for 155 yards and the three scores.

“We practice these things day in and day out,” Forde said, downplaying his own derring-do. “For me personally it’s huge being able to come back like this after missing all of last year (because of a back injury).”

Overshadowed by Stearney’s passing proficiency was the dominance of Loyola’s running game. Junior Will Nimesheim (14 carries for 95 yards, 2 TD’s), MacPherson (9 for 70, TD) and Stearney (9 for 69) all amassed more yards than Brother Rice did as a team (22 rushes, 53 yards).

Highlighting Nimesheim’s running performance was his 29-yard jaunt for a touchdown in the final minute of the third quarter. He also contributed to the passing game with 4 receptions for 44 yards.

“Will has been great catching the ball out of the backfield,” Holecek said. “He and Drew are a great pair. They make plays where there isn’t anything there.”

The Ramblers will be back at Hoerster Field on Saturday, Sept. 24, to play Fenwick, another team they had a hard time defeating last season. That 27-24 conquest came on Baker’s 41-yard field goal with no time remaining on the scoreboard clock.

The Friars, who recovered from that narrow loss and went on to win the Class 5A state championship, are going into the rematch with a 2-2 record.

Loyola will be without junior defensive lineman Joe Kelly, who had to be driven off the field after sustaining an ankle injury in the last two minutes of the first half of the Brother Rice game. He is joined on the disabled list by senior linebacker Rocco Izzo, who sustained a shoulder injury on Sept. 10 at St. Rita.

Fortunately, according to Holecek, neither injury is serious and both players are expected to be back on the field during the second half of the regular season.