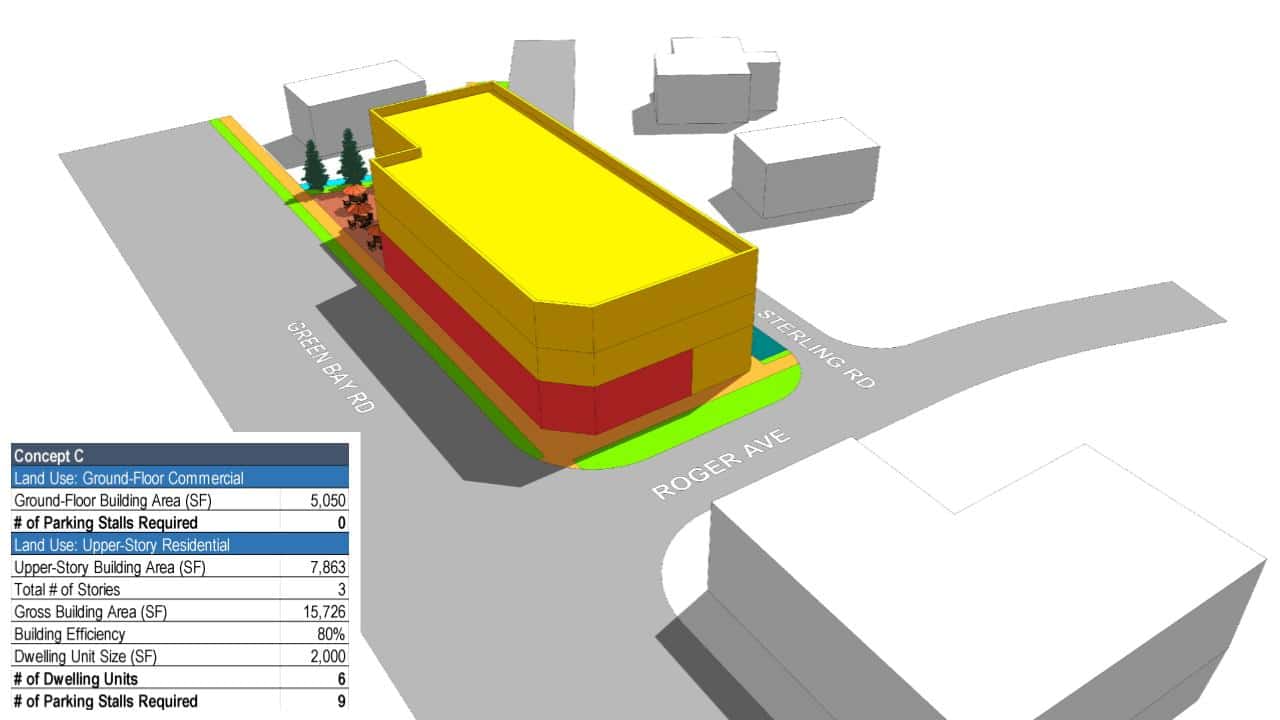 The question on how to develop the property at Green Bay Road and Roger Avenue drove discussions at a joint Plan Commission and Architectural Review Commission meeting Monday evening, June 27, when commissioners looked at their available options.

The property in question consists of a vacant village-owned lot as well as a building at 600 Green Bay Road. The owners of that building, who were present at the meeting, have expressed an interest in working with the village to develop the land.

Johnson stressed that the discussions were in the early stages and called it “a way to kick start ideas.”

“And, so, this is a way to maybe generate some interest in doing something,” he said.

Additionally, the meeting comes after the results of a community visioning survey were released. The survey, according to a presentation on the village’s website, was conducted over three weeks in March, and 347 responses were received.

The questions on the survey related to Kenilworth’s business corridor, and 86 percent of respondents said they would like to see a community gathering space, such as a café. Additionally, 91 percent said the general appearance of the business corridor should “reflect the overall quality of our neighborhoods.”

Residents surveyed also said change is needed in Kenilworth. When asked if “the current mix of retail, dining, and services in the business corridor is ‘just right,’” 79 percent said they disagreed with that statement, with only 9 percent agreeing.

The survey also asked residents what type of businesses they would like to see in Kenilworth. Food or drink options received overwhelming support by the community, with top preferences being toward a café or coffee shop (91 percent), a restaurant (83.6 percent), a bakery (78.7 percent), a wine store or bar (64.6 percent), or a bodega or food market (63.4 percent).

With those survey results, the commissioners began informal discussions Monday with a presentation from John Houseal, principal with Houseal Lavigne Associates, a consulting firm that specializes in urban planning.

Houseal presented three concepts to the board, two of which include retail space and one that is solely residential.

The three concepts he presented were: 1) a multi-family housing unit, 2) a mixed-use property with retail space on the ground floor and housing on the upper levels; and 3) the second concept but with the addition of an outdoor patio space that could be used by a restaurant or coffee shop.

Much of the discussion Monday centered on housing. As there were only three plan commissioners and two architectural commissioners present, no vote was taken and discussions were described as “informal.”

While there was close to unanimous support for restaurants and businesses, a significant number of community members surveyed — 47 percent — supported the idea of “offering high-end housing opportunities for residents who wish to downsize and remain in the Village.” Thirty percent had no opinion, and the remaining 23 percent disagreed.

Houseal said there was a time when communities were against multi-family housing, such as condominiums and townhouses, but the attitude toward the concept has evolved.

“And now a lot of these folks are getting to the point where they’re like, ‘I no longer want to maintain a huge house … but I don’t want to move out of my community,’” he said, adding that “Often times, a huge percentage, if not all, of the units are bought before (the development) breaks ground by people who live in the community already and want to move into that and sell their house.”

Johnson said he would like to see data on recent multi-family housing units in Wilmette and Winnetka to see how big the units are. He added that he’d be interested in knowing how the potential housing would look.

“Is it vertical or is it stacked one-story units?” he asked. “Because by the time people move into that unit, they’re ready to get rid of their stairs.”

Johnson suggested the addition of an elevator if the commissioners decide to pursue housing.

One of the main discussion topics was parking, specifically where residents would be allowed to park. The types of parking were also discussed, with some options being parking spaces behind the building that would exit onto Sterling Road, and possibly the addition of garage doors.

Kenilworth resident Julie Garrison said she believes “parking is going to be the problem” when it comes to figuring out what to do.

“My preference would not be that it’s a wall of garage doors right there,” she said. “I think it’s pretty clear the residents there would agree with that.”

Garrison also said she believes “a café or something much more open” at Roger Avenue would be a good idea.

Architectural Commissioner Paul Armstrong agreed that parking could be an issue and said it needs to be determined whether it’s better to have parking on Sterling Road or Roger Avenue.

He also expressed support for the third concept, which includes the open air patio.

“I do like the plan with the open area to have some outside interaction, whatever that interaction might be,” he said.

Houseal told commissioners that he will take their feedback, as well as comments from the public, and return with more “refined concepts,” and once again expressed that all designs are preliminary. No commissioner expressed a preference for one plan over the other, and they also didn’t offer negative opinions on any of the plans.

A second workshop meeting between the two commissions will be held on July 19.