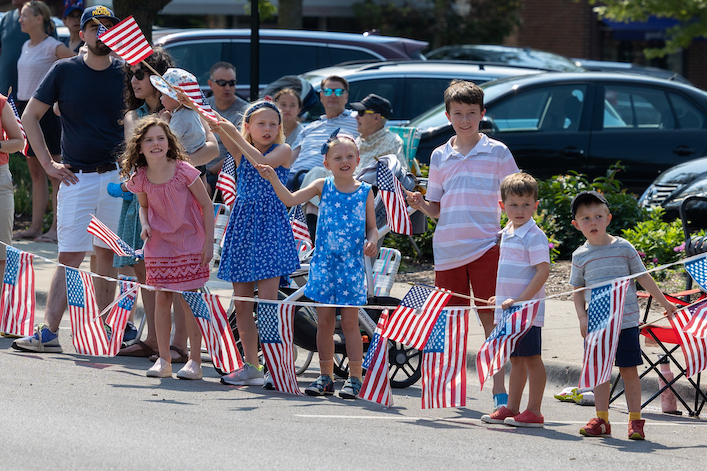 Young paradegoers wave American flags as the Fourth of July parade approaches in Winnetka in 2021. | The Record File Photo

Credit happenstance instead of strategy for a significant Fourth of July maneuver in Glencoe.

After two years without Fourth fireworks, the Glencoe Park District found this year that their preferred vendor could no longer provide fireworks on the Fourth of July. Finding no luck with new vendors, park officials shifted the light show to a day earlier and turned the town’s Fourth celebration into a two-day affair, according to Erin Classen, communications leader with the park district.

The weekend fun will start with a Party in the Park at 5 p.m. Sunday, July 3, in Lakefront Park, 99 Park Ave. Games and inflatables will be set up on the tennis courts until 8 p.m., while four food trucks and beer and wine sales will run until 9 p.m. Live music begins at 6 p.m. and fireworks light the sky afterward.

Independence Day on Monday, July 4, begins with the Rotary Fun Run at 8 am. at the Glencoe Metra Station. From 9:30-11:30 a.m., residents can enjoy games and more at Kalk Park. The Independence Day Parade steps off at 1 p.m. at South Street and Hawthorn in downtown Glencoe and ends at Hazel Avenue. Interested parties can still register to march in the parade.

While all of that is going on, Glencoe Beach is open to season passholders, who can enjoy music, food and more at the Beach Party from 11 a.m.-9 p.m.

The Wilmette Park District is once again gearing up to host the party of the year in Wilmette, as officials expect 20,000 people or more to enjoy food, fun and fireworks at Gillson Park on Saturday, July 3.

The annual Independence Day bash will begin at 5 p.m. and run through a fireworks display at dusk.

After a year off in 2020 because of the spread of COVID-19, the celebration returned last year with changes to increase personal space during the festivities. Just like a year ago, there will not be a carnival-games tent. Roving entertainers and more food vendors will fill the park.

The Blooze Brothers take the main stage at 5 p.m., followed by the Jessie White Tumblers, and then the band Good Clean Fun will perform until the fireworks around 9:30 p.m.

Free parking is available while it lasts at Gillson Park, at the Metra lot in downtown Wilmette and at Ryan Field at Northwestern University. Limited paid parking spots are at the Fourth and Linden CTA station.

A Pace bus shuttle will not be active this year. A pickup and drop-off route is set with an entrance on Lake Avenue and exit though the south end of the park.

The dog beach, Langdon Park and Elmwood Dunes will be closed on Sunday, July 3.

The celebration surrounding Winnetka’s fireworks will be tempered this year at Duke Child’s Field. The village’s stormwater project has begun, and the site will only host the fireworks show beginning around 9:20 p.m. on Monday, July 4.

Earlier in the day, however, beginning at 10 a.m. a parade featuring the Great Lakes Naval Band and Uncle Sam on stilts (among other entries) will march from Elm Street and Glendale Avenue to the Village Green, 525 Maple St., where plenty of family-friendly activities — such as races, crafts, face painting and inflatables (wristband required) — will take place from 11 a.m.-1:30 p.m.

The itinerary begins with a bike parade, which will ride from the North Shore Senior Center, 161 Northfield Road, to Willow Park, 401 Wagner Road. Wagons and strollers are also welcomed to participate and compete for prizes of best decorated overall, most creative and best retro.

A beer tent, food, family races, inflatables, crafts and more will be awaiting families at the park.