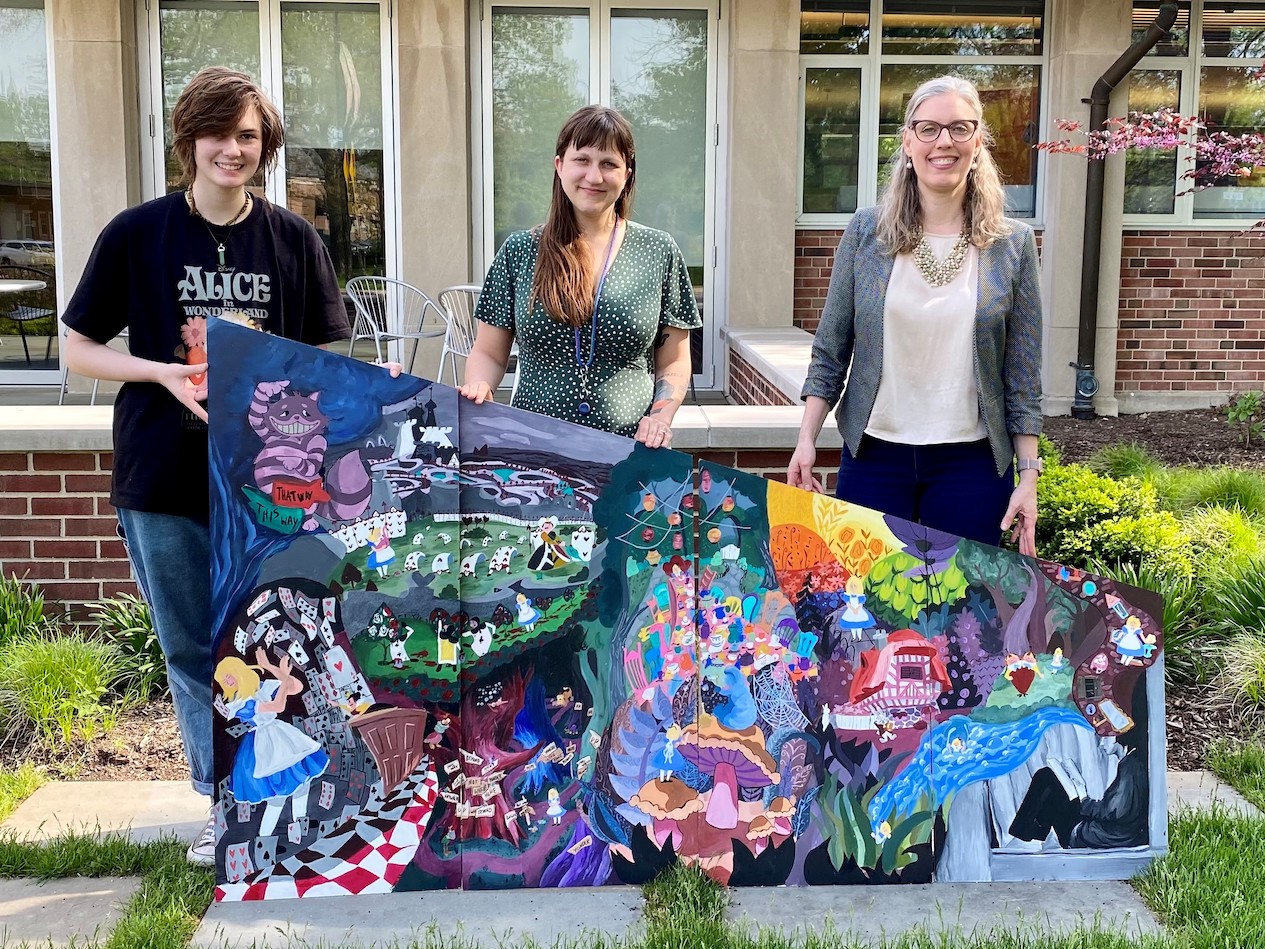 An rising senior at New Trier High School created a mural that is now installed at the Winnetka-Northfield Public Library, 768 Oak St. in Winnetka.

According to a release from the library district, the mural was created by Channing Christ as part of the Create Project through the high school’s Integrated Global Studies School.

Christ’s mural, entitled “Alice’s Adventures in Escapism,” is the culmination of a year-long exploration of escapism and the question “Does escapism deserve its negative connotation?”

The personal statement related to the mural reads, “In this piece I aimed to show the joys of escapism. Escapism has gained a rather negative connotation recently, it tends to be seen as the antithesis of ‘being in the moment,’ (which apparently is the key to happiness). However, this couldn’t be further from the truth, escapism is human nature. All forms of entertainment humanity has ever created are forms of escapism. Without things like reading, movies, plays or your own imagination, life would become bleak and colorless, much like it is for the girl in the painting. Yet through escapism, she is able to leave her world of gray behind for a brilliant world of color. To dream of a world of color when yours is gray is not a bad thing, after all, who really wants to live in black and white?”

Winnetka-based The Volunteer Center is inviting nonprofit directors and officers to training on board governance in a free program from 8:30-10:30 a.m. on Wednesday, June 15, at the Skokie School, 520 Glendale Ave., in Winnetka.

This is the first in-person training program hosted by the Volunteer Center since the onset of the COVID-19 pandemic in 2020.

“It promises to provide valuable information on effective and the essential fiduciary and legal responsibilities of the board, that details the pillars of good board governance,” according to a press release from the Volunteer Center.

Accountant Nancy Gonsiorek will lead the training. She has more than 25 years experience as a consultant to nonprofit clients on a variety of critical issues to board management.

Registration is required to attend.

One hundred nine 2022 New Trier High School graduates received the Seal of Biliteracy, an award granted by the Illinois State Board of Education to celebrate students who achieve proficiency in English and at least one other language, according to a release from the high school.

To collect the honor, students must earn an English score of 21 or higher on the ACT or a score of 4.8 on the ACCESS exam. Students can show proficiency in another language earning a 4 or a 5 on the Advanced Placement language exam or by scoring highly on a state-approved test

The 109 students honored are: