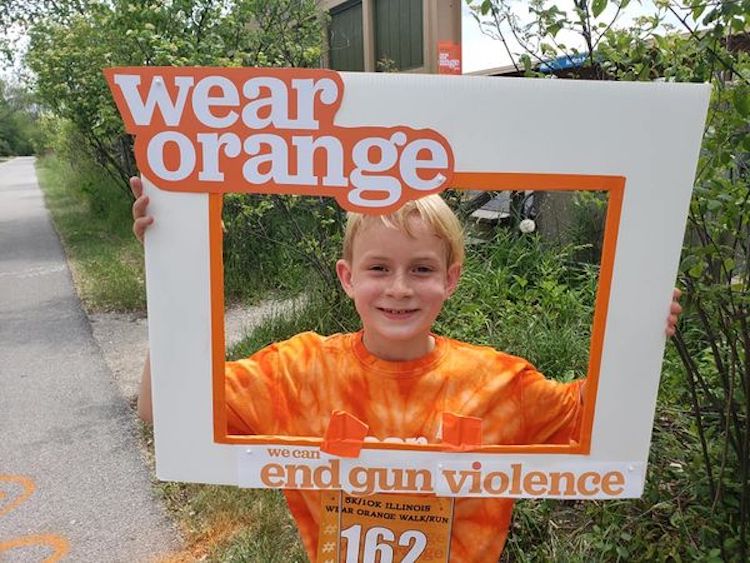 Thirty-four years have gone by since Andrew, a Winnetka native, was shot in the chest by a school shooter, and gun violence, specifically mass and school shootings, have only increased since — the result of an inability to “demonstrate the moral will and leadership to do what is necessary to protect our children,” he said.

But Andrew — who is a Loyola Academy alumnus who now lives in Wilmette — sees something different in today’s youth. He sees a drive and courage to fight for change that will stem school shootings. Andrew said he was moved by the local students who invited him to speak at Wear Orange, an anti-gun-violence 5K and event set for Sunday, June 5, in Indian Hill Park in Winnetka.

“These (school shootings) are eminently predictable and eminently preventable and I am really encouraged that these young people are demanding policy-makers for solutions,” Andrew said. “They have grown up in a generation that has lived with this fear. And it’s time we made the change.”

Andrew will be one highlight of Wear Orange, a family-friendly event open to all community members, said Erinn Martin, a co-lead for Moms Demand Action NorthShore, which is organizing the event along with Students Demand Action factions from New Trier High School and Northwestern University.

The event will begin with a 5K walk or run along Green Bay Trail, for which participants will be given small backpacks containing an orange ribbon and a piece of paper with the name of a recent victim of gun violence, either from the tragedy at Robb Elementary School in Uvalde, Texas, or from a shooting in Chicagoland.

The participants will be encouraged to write the name of the victim in chalk along their path and tie the ribbon around a tree of their choosing, Martin said.

“(The event) is really a call to end gun violence,” she said. “It is a chance for the survivors of and people who have been taken by gun violence to be remembered.”

Wear Orange is an annual and nationwide initiative formed in 2015 to honor slain Chicago teenager Hadiya Pendleton, who was shot in the back in 2015 while standing in a public park. Orange is a nod to the color hunters wear to avoid being shot.

The program is co-sponsored by Moms Demand Action, a group that advocates for stronger gun laws and other public-safety measures in an effort to curb gun violence. Local chapters of MDA began forming recently, and Sunday marks just the second Wear Orange event in the New Trier area.

After the 5K, the event continues in Indian Hill Park, where Andrew and other special guests will speak, including a representative of the nonprofit Guitars Over Guns. Musicians from the nonprofit will be performing later in the evening at Winnetka Chapel.

The recent mass shooting in Uvalde, Texas — 21 dead, including 19 children at Robb Elementary School — on May 24 was not the impetus for the Wear Orange event in Winnetka, but it has influenced the response, Martin said.

Moms Demand Action groups have reportedly seen more than 250,000 signups since the tragedy, Martin said, and the Winnetka Wear Orange event had nearly 300 RSVPs (register for the event online here) as of Wednesday, June 1.

“(The Uvalde shooting) made it more important to be here for the community,” she said. “I think a lot of people felt so helpless in wanting to do something and wanting to be together and just make a space for those who were taken. (Wear Orange) provides a family event where one can commemorate the victims.

“I think anything that allows people to grieve in their own way and put them in the middle of the community with a sense of purpose is what this is about.”

Hundreds of Wear Orange events will take place nationwide — and seven in Chicagoland — throughout the month, and while the event does not specifically advocate for legislative change, Andrew does.

Andrew said that at the event he will express gratitude to the crowd for their activism and attention and direct them to policies that in his experience — as an attorney, 20-year career as an FBI special agent, and crisis and conflict consultant for law enforcement — are realistic and would effect change.

“There are really three main legislative or policy things that will make a difference in (gun violence): universal, comprehensive background checks; red-flag law that Illinois has but needs to use effectively, so law enforcement, when petitioned by family members, can remove firearms; and then finally raising the age for assault weapons and other dangerous weapons to 21 and above.”

And more than three decades after he became a survivor of gun violence, Andrew still believes.

“The conversation has shifted and with the youth, they are sophisticated and their sort of impatience for things that stand in the way of public safety is going to help carry the day.”