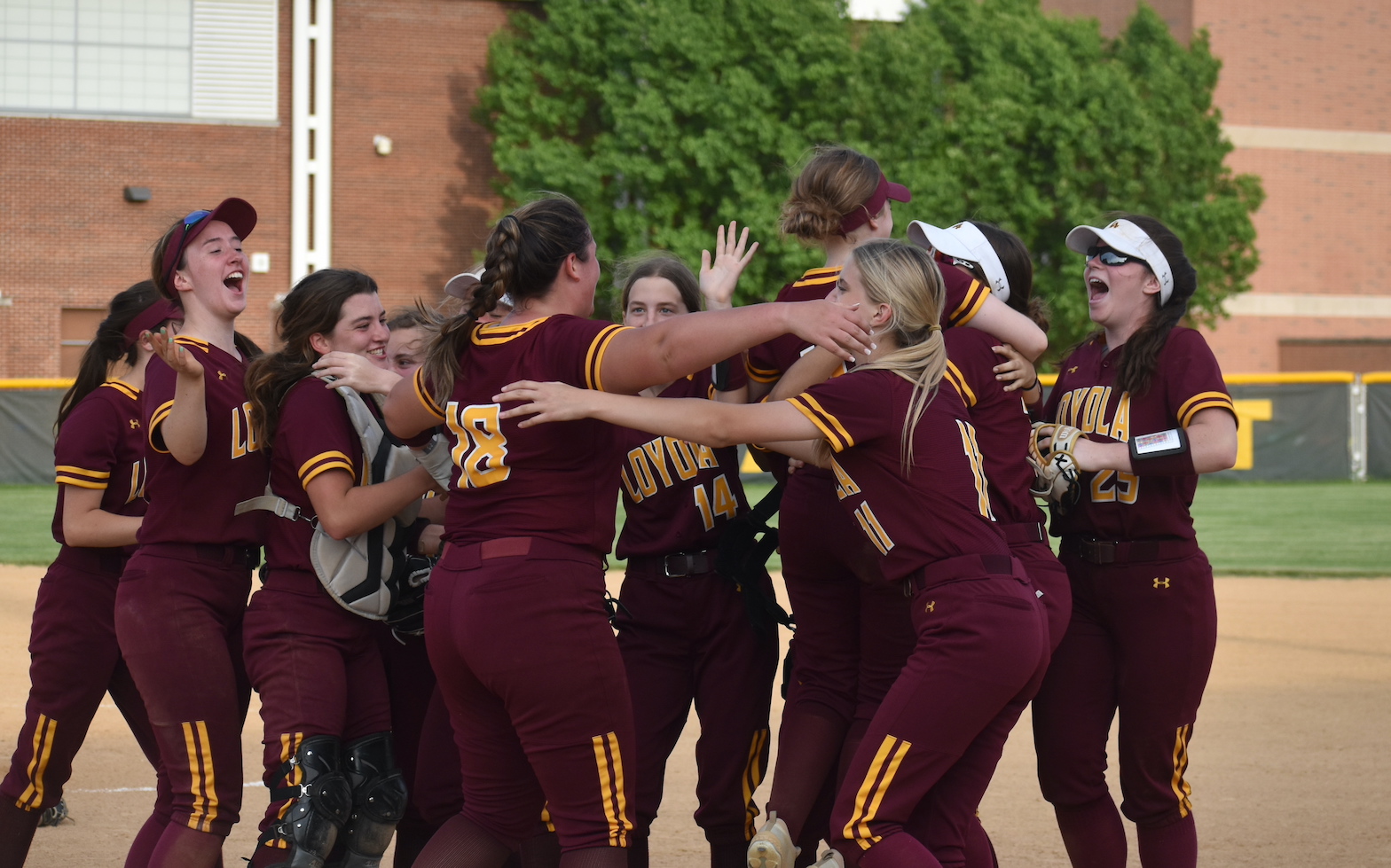 The Ramblers celebrate on the field after their sectional win on Tuesday, May 31, in Glenview. | Photos by Kaleb Carter/The Record North Shore

A bout of illness has done nothing to slow down Loyola Academy senior pitcher Mackenzie Barry over the past week.

Returning to practice on Friday, May 27, Barry hurled an 18-strikeout no-hitter the next morning, when the Ramblers won 4-0 to claim a regional championship.

Somehow, Barry produced just as, if not a more, impressive eight-inning, 1-0 shutout victory over sectional top seed Buffalo Grove in an IHSA Class 4A sectional semifinal victory Tuesday, May 31, at Glenbrook North.

“She’s unstoppable,” Loyola Academy coach Leah Herlocker said.  “She’s an incredible competitor and she gets pumped when the team is behind her too. When it’s win or go home, she never says die.”

It was the third shutout in three playoff games for Barry and the Ramblers, the sixth seed in the tournament.

Against the Bison, Barry yielded just two hits and again struck out 18. The Northern Illinois University softball commit allowed a single to the Bison’s J.J. Jakosalem and walked Hannah Hull in the first inning with one out, bringing Jenna Kosnoff to the dish. Kosnoff singled just hard enough to center to keep Jakosalem held up at third.

Barry found an answer, reaching full counts to consecutive batters and striking them both out to get out of the biggest jam she faced all afternoon.

“Irene, who’s our pitching coach has worked with her a lot (on) how to think about her counts and obviously she’s incredibly intelligent on her own,” Herlocker said of Barry. “She knows when she gets deeper into a count and she’s throwing some of those pitches that aren’t strikes, she’s going to get batters to chase.

“That’s what makes her an incredible pitcher, she’s confident enough to throw those pitches that are outside of the zone.”

“She’s phenomenal and she pitched a phenomenal game,” Barry said of Ryan.

Loyola Academy’s biggest threat came in the fourth, when the Ramblers loaded the bases thanks to two Buffalo Grove errors and a Maureen Kinsella walk. But a ground out to first base ended the threat.

In the top of the eighth inning, the Ramblers Emilia Bartholomew reached base when she was hit on the arm by a pitch. She stole second and then took third on a ground out to first by Lily Moran.

Barry then slugged a high fly to deep center that scored Bartholomew for the game’s lone run.

“I was thinking fly ball or slow roller to the right side, just somewhere other than the left side of the field, just hoping to put the ball in play,” Barry said.

The senior pitcher, who embraced Bartholomew with tears in her eyes after the final out, had words of adoration for her rising star, young catcher.

“She’s the best person to be in that situation,” Barry said of Bartholomew. “She’s fast, she’s very smart on the bases, she knows how to slide correctly and get away from that tag. She’s amazing. Love her.”

Loyola Academy (17-12) is set to face Warren or Waukegan in a sectional title game Saturday at Glenbrook North at 11 a.m.

“The catcher, the fielders, the outfielders, we have been stellar in these past two games, the sectional and regional games,” Barry said. “I’m stoked and absolutely astonished and amazed at how far we’ve come from the beginning of the season to where we are now.”