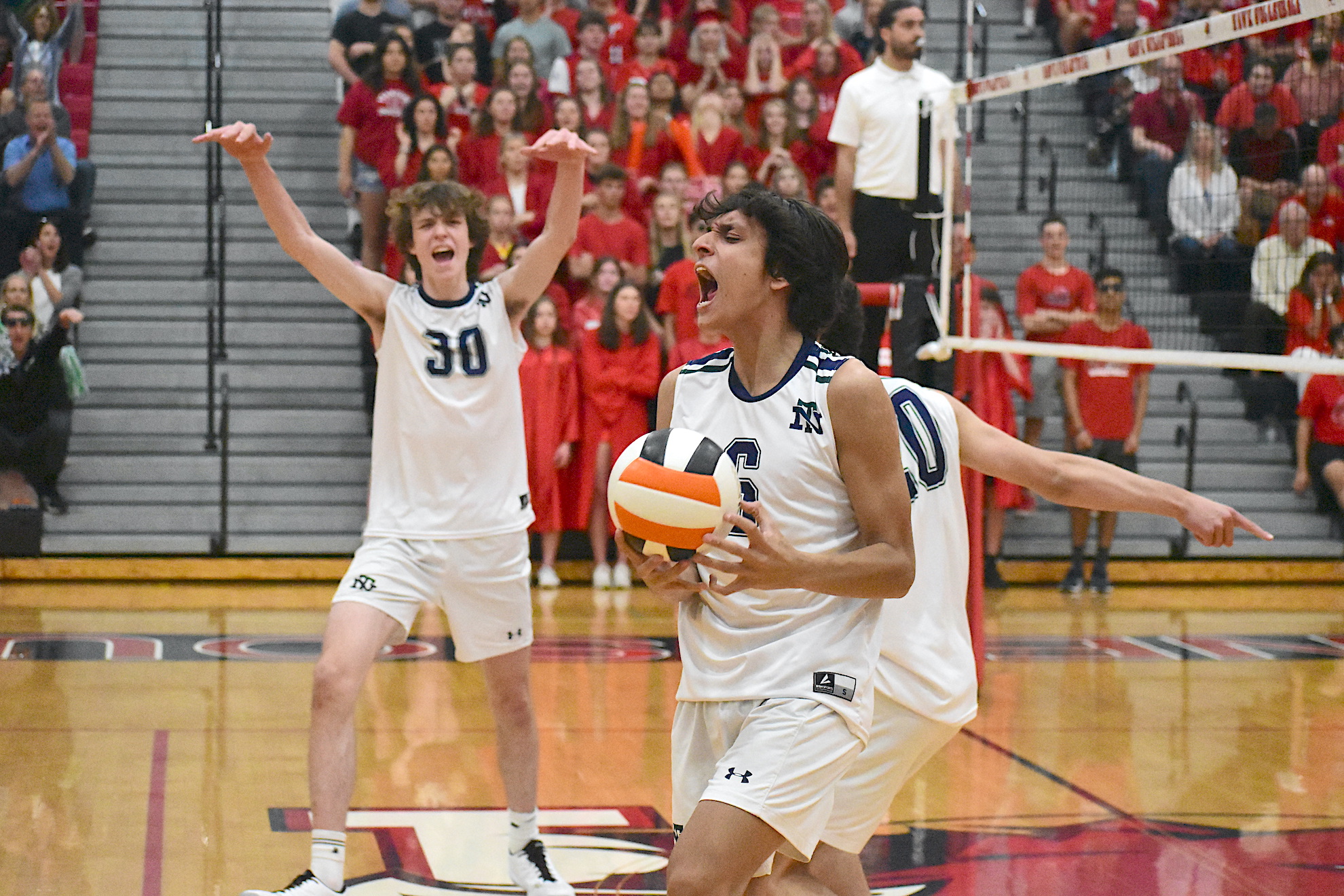 Asked if improved defense was a priority after New Trier volleyball’s first-set loss in the regional final, senior libero Will Hopkins make it clear:

“Most for sure definitely.”

Consistently in the right place, Hopkins keyed an inspired back-row effort by the Trevians by collecting 24 digs as his team rebounded for a 19-25, 25-19, 25-21 victory against Maine South Thursday, May 26, in Park Ridge.

New Trier had to fend off a furious third-set comeback by Hawks, who erased a six-point deficit and tied things up at 21-21. The Trevs, though, answered the bell and scored the match’s final four points to earn their seventh regional title in the last eight seasons — the only loss coming last year.

Hopkins said more consistent passing was all his team needed to return to form.

“We could take advantage of our transition kills if we could just get one dig up,” he said. “And that’s why got us over in the second set and in the third set as well.”

New Trier coach Sue Ellen Haak knew her team was in for a battle in regional play when she saw the IHSA tournament bracket. Despite having the sectional’s seventh seed, the red-hot Hawks were the regional hosts, were 10-2 in the month of May and already bested the Trevians twice this season.

Maine South was at it again early, keeping New Trier off-balance with aggressive service to grab control of the first set en route to the one-game advantage.

The Trevians committed 14 errors in the loss.

“We gave them a lot of points,” Haak said. “That’s what happened the first two times we played them too. We have been working on that and doing so much better at that. I think we started the game a little tight.

“I was very proud that they fought out of that and got to show what they can do.”

Going down 6-3 in the second set, the Trevians turned things around thanks to a spirited defensive effort at the net and on the back line. Haak credited her team’s improved serving, as well, for the recovery.

The back-and-forth set shifted New Trier’s way late, when the Trevs turned a 16-16 tie into a 21-16 advantage with Hopkins at the service line.

“We were very pleased with our defense and blocking toward the end — and serving, too; that’s part of defense,” Haak said. “Serving has been a nemesis for us this season and tonight it’s what carried us through.”

In the decisive set, New Trier often looked to sophomore David Wolff to deliver. The 6-foot-8 outside hitter racked up seven of his match-high 16 kills in the final set.

As the season developed, so too did Wolff, becoming New Trier’s go-to source on offense.

A Wolff kill gave New Trier a commanding 14-8 lead, but the Hawks weren’t through yet.

Two kills by New Trier senior captain Stefan Gjaja (16 assists, 11 digs, 7 kills) and two Hawks hitting errors sent the Trevians home with a regional championship and on to the next round of the state tournament.

Also chipping in for the Trevians were Tristan MacPherson with five kills and 5 blocks and Shane Sullivan with 19 assists and nine digs.

New Trier will take on the sectional’s third seed, Buffalo Grove, at 3 p.m. Saturday, May 28, at Glenbrook South. The sectional championship will take place at 6 p.m. Tuesday, May 31.