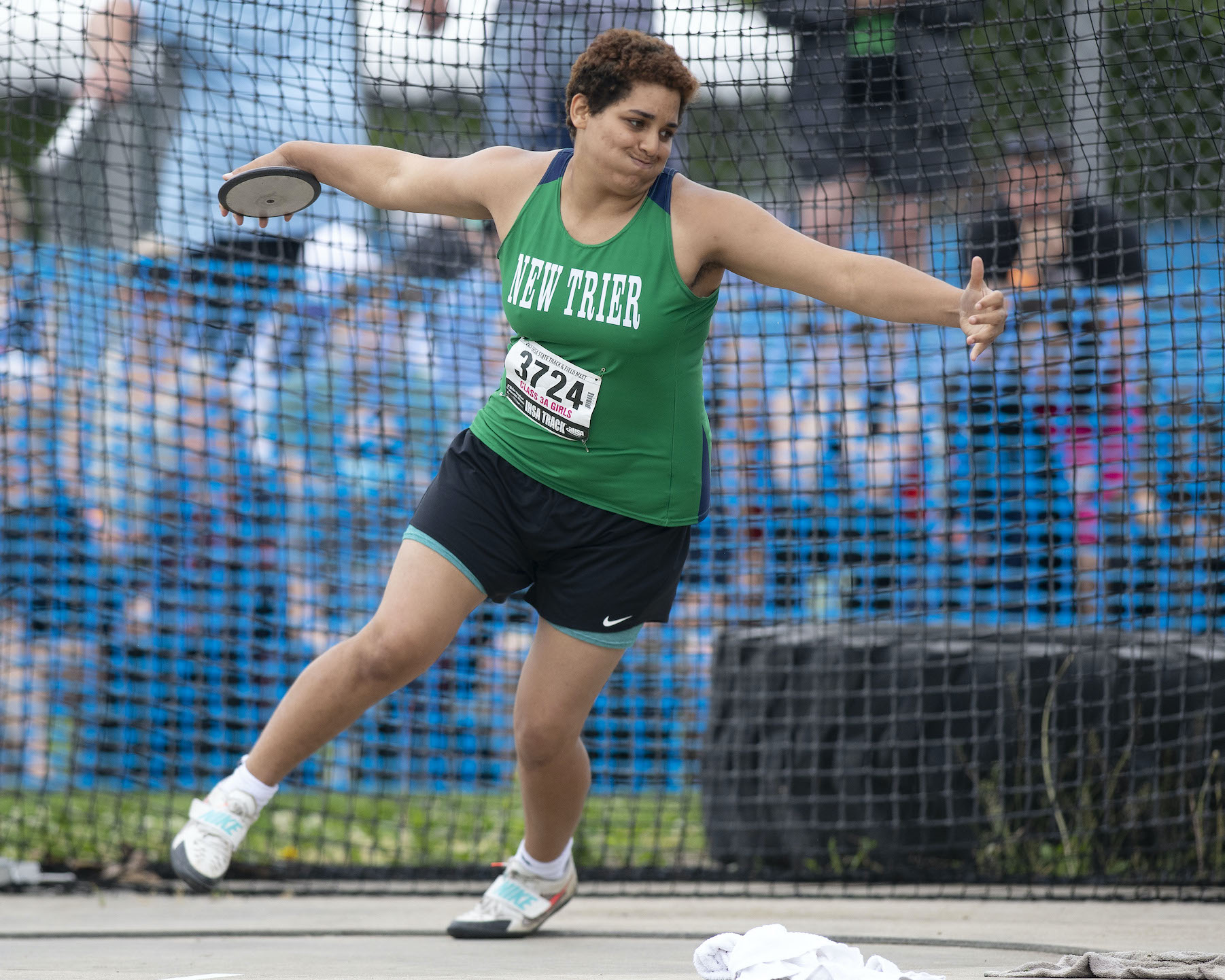 Maeve Kelly sets up a discus throw at the state championships Saturday, May 21, in Charleston. | Chris Johns/PhotoNews Media

Sports cliches — like “The pressure is on,” “It all comes down to this” and “Go big or go home” — are cliches for a reason. They are memorable.

While all of the above applied to Maeve Kelly’s position on Saturday, May 21, in the IHSA Class 3A track-and-field championships, another cliche was bouncing around her brain.

In her final attempt, the New Trier junior launched the shot put 13.35 meters, or 43 2/3 feet, to catapult up the leaderboard. The throw earned her a second-place, All-State finish and was a personal and school record, both of which she broke again and again throughout the season. Kelly’s second-place state result is also the best in school history in the event.

Kelly later added another second-place finish. This time in the discus, which she hurled 41.71 meters, or about 137 feet, also a personal best. Kelly’s discus performance rests behind that of former Trevian Katherine Dykstra, who won a discus state championship in 2002.

Despite the record weekend, Kelly saw room for improvement and wants a state title or two next year.

“I was hoping to place first in both events,” she said. “My technique could have been a lot better in the shot and if I arched my back more in discus I could have thrown even better.”

This was Kelly’s second straight state appearance. She placed eighth in the shot (11.87 meters) and 15th in the discus (33.29) in 2021. With Kelly’s significant improvement in 2022, New Trier coach Bob Spagnoli can hardly wait to see what she can do as a senior.

“You wish and you hope kids run, jump and throw (personal records) when they are on that big stage. And that’s what Maeve did. And she did it on her last throws,” he said. “… I am not in any way, shape or form disappointed, but I am just so excited for next year, because she is going to crush her own records. She is going to be such a dominant force in Illinois track and field next year. … I really can’t put into words how proud I am of her.”

Manzano, a sophomore, also set a personal best on the big stage, leaping 5.44 meters to advance to the second day and place 10th overall. Spagnoli said she is the first Trevian long jumper to make Day 2 at the state championships.

Garrou (3 meters) and Scarborough (2 minutes, 29.67 seconds) did not advance to the finals.

Loyola Academy’s 4-by-800 relay squad picked up a seventh-place finish with a final run of 9:30.26. All four runners — freshman Jane Lynch, sophomore Morgan Mackie, and juniors Maeve Norman and Ellie Grammas — will return for the Ramblers next season.

In IHSA Class 2A, the Panthers Haneefa Adam placed fifth in the triple jump with a distance of 11.02 meters. Adam, a junior, already holds the school record in the event. Adam was joined by senior Tamia Quach, junior Kendall Williams and sophomore Sara Byrne in the 4-by-100 relay on the first day (52.03 seconds), and Williams placed 16th in the long jump (4.87 meters).