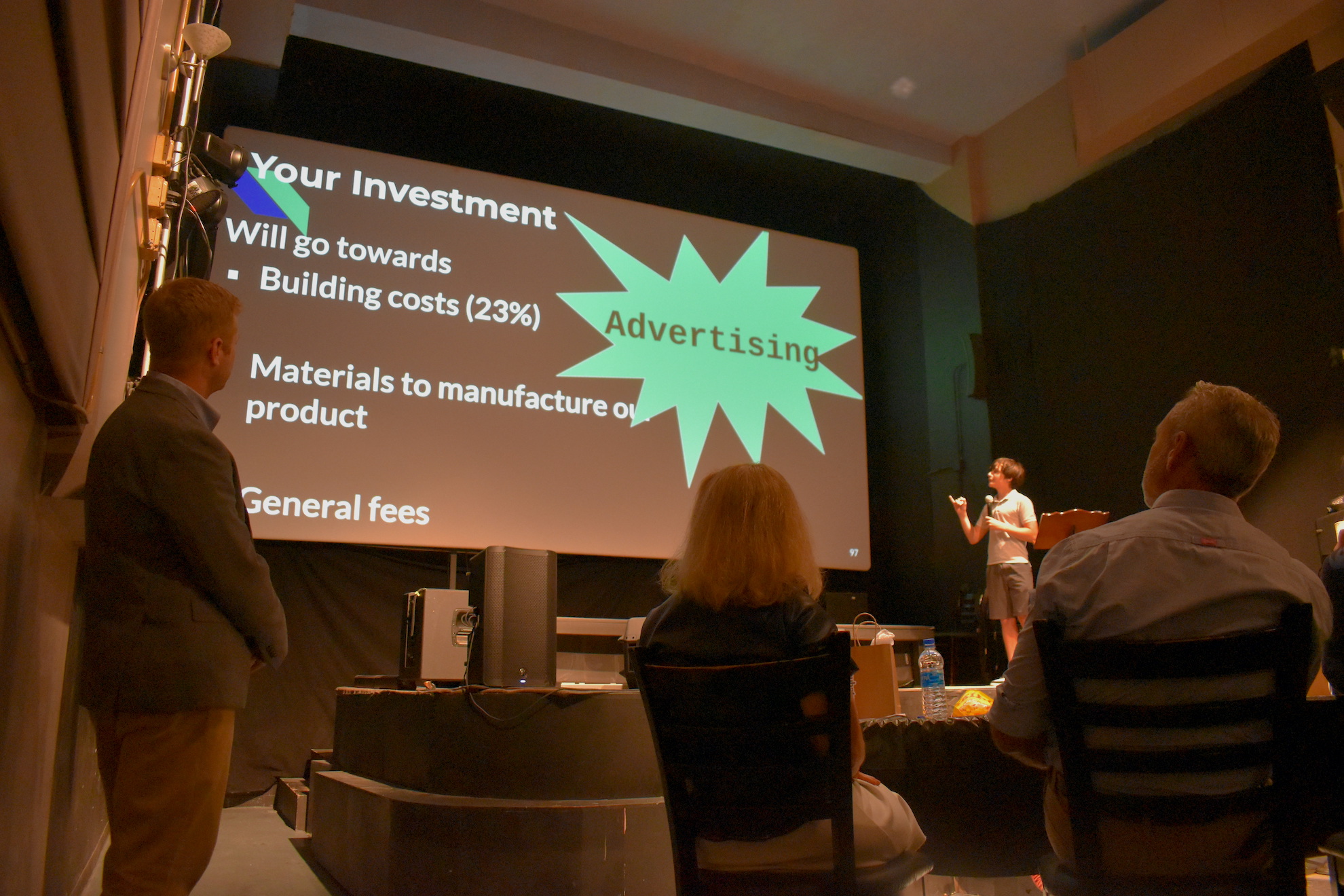 Griffin Rusche works through a presentation for Coolbands in front of judges and a live audience Thursday, May 19, at Wilmette Theatre. | Photos by Joe Coughlin/The Record North Shore

The sharks have spoken.

In an imitation of the hit reality program, “Shark Tank,” a panel of judges considered four product ideas from New Trier High School students on Pitch Night Thursday, May 19, at the Wilmette Theatre.

At the evening’s end, the sharks — to the surprise and delight of the crowd of parents, students and community members — chose Coolbands as the winner.

Coolbands, which are sweatbands that contain removable icepacks, was a late addition to Pitch Night after it earned a People’s Choice nomination thanks to votes from the audience. It is the brainchild of Jack Malmed, Luke Pauly, Kai Bandari and Griffin Rusche, the latter of whom delivered the successful pitch on Thursday night.

Coolbands was one of 11 products developed by students in New Trier’s year-long entrepreneurship course, also called Startup U. The program has been funded by the New Trier Educational Foundation since 2018, according to Liz Mayer, the foundation’s executive director.

The first Pitch Night was held in 2020, but because of the pandemic, it was hosted virtually. Thursday night was the first in-person event.

“Being here with everyone is so much better,” Mayer said. “This kicks off a hopefully long and successful relationship with (the program).”

Behind the instruction of teachers Bob Bollweg and Sara Burnett, the entrepreneur students began with an idea for a new product or service and developed it throughout the school year. Aided by “mentors” from the community, the students created business plans and financial models and conducted market research and analysis, among other things.

The development first led to a preliminary pitch in March, for which the students presented their product and collected feedback, and then to a final pitch in front of a panel of New Trier educators in May. The panel supplied Pitch Night with three finalists: Soccer Tube, a partial sock that covers shin guards and offers comfort and reliability; Gouter, a monthly meal service focusing on delivering experiences of different cultures; and Cleat Feet, a slip-on cover for athletic cleats so athletes do not have to remove cleats on hard surfaces.

As guests arrived to the Wilmette Theatre, they reviewed a handful of other products on display in the lobby — such as Smart Tarp, a tarp with weighted corners; and Triton, a portable and collapsable sink — and voted for their favorite to join the Pitch Night presentations. Coolbands was the victor.

The products were then pitched to the sharks, who were Katie Degen, of Central Station Coffee & Tea in Wilmette; Jorge Esteve, of Hecho Consulting; Sally Pofcher, of Hanna Andersson, a children’s clothing company; and Auston Rothbard, of Twisted Road, a motorcycle-sharing service.

Coolbands will be New Trier’s entry in a larger competition against high schools with similar programs.

The Record’s Editor in Chief Joe Coughlin, who is the author of this piece, was a mentor in New Trier’s entrepreneur class this year. He is mentoring three students who developed an idea for a digital product called Trimly, which would allow users to see how different hair cuts and styles look prior to getting a service done.