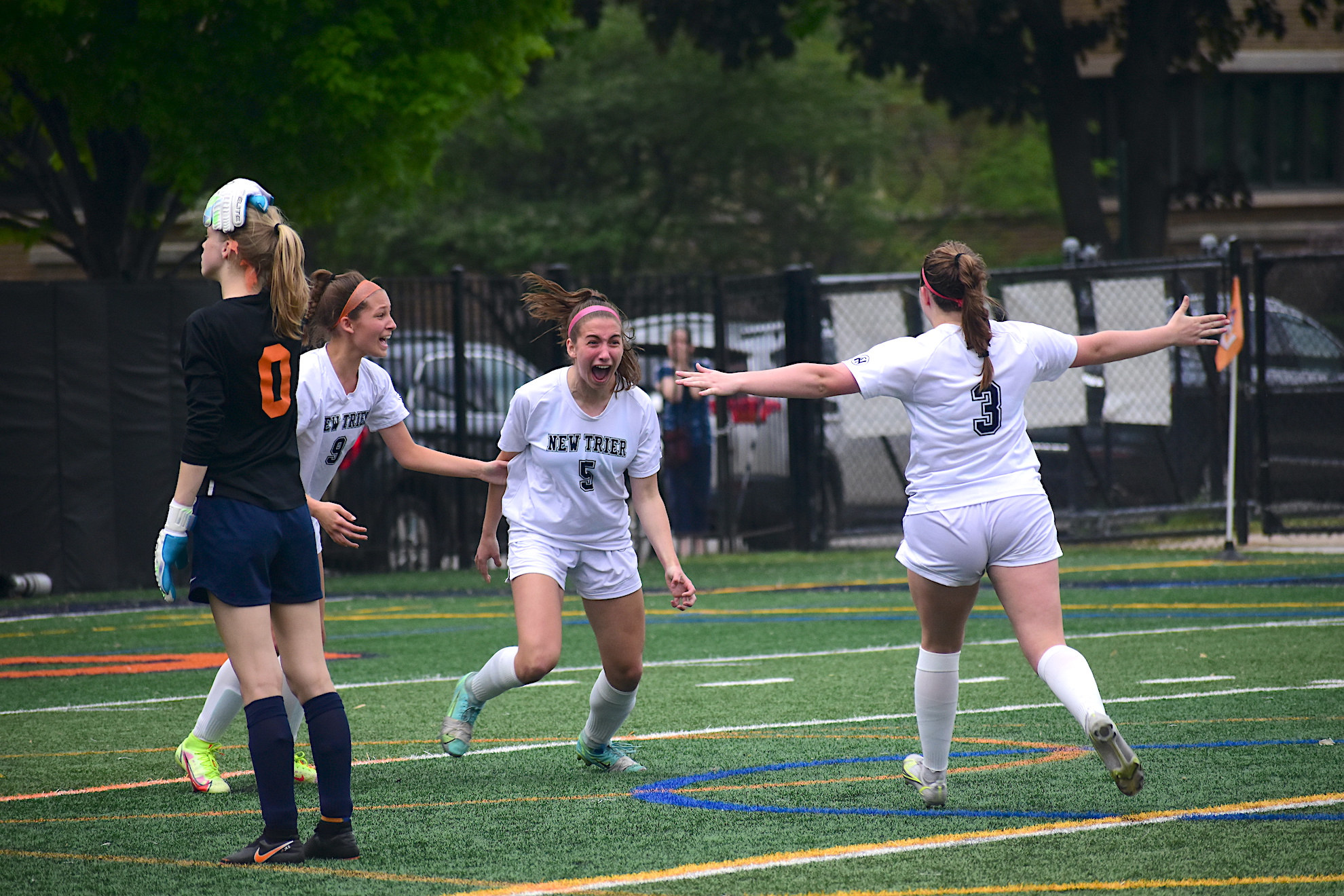 What’s a game-winning playoff goal worth? At least a slap in the face if you ask New Trier’s Teagan McNally.

After McNally headed home the lone goal in the Trevians’ thrilling 1-0 regional victory against Oak Park River Forest Friday, May 20, the senior collided with Huskies’ goalkeeper Lilah Gery near the top of the box, took two hands to the face and tumbled to the ground.

But from the turf, McNally watched her head ball roll unimpeded into the net.

“I saw the (pass) in front of me and I figured I could try to touch this around the keeper and if I get knocked down I could hurry and touch it in,” McNally explained. “Honestly, I did not expect the ball to go in the goal after my head.

“I expected (contact), but didn’t expect to get hit slapped in the face — but I got a goal out of it.”

The goal led the Trevians to their 20th consecutive regional championship. New Trier has never lost in regional play, earning a title every year since the IHSA added regional rounds in 2001.

This year, however, was more of an uphill challenge than most seasons. The Trevians finished the regular season with the fewest wins (10) in coach Jim Burnside’s tenure, which began in 1997. Following seven straight sectional titles, New Trie earned the No. 5 seed in the sectional and were underdogs to No. 4 OPRF.

“They stepped up,” Burnside said of his team, which opened the playoffs with a 2-0 win over Jones on Wednesday, May 18. “I’m happy and impressed.

He added, “We’re young. … Every game we’re learning. This (win) was heart. We know we’re going to throw everything we can out there, because we’ve been here before.”

In a fast and physical game, both teams had scoring opportunities in the first half. A Huskies’ direct kick from just outside the 18-yard box zipped over the crossbar, and a far-post touch from New Trier’s Josie Noble was headed off the goal line by an OPRF defender.

The Trevians came in ready for the Huskies’ athleticism, fortifying their back line and making sure to check OPRF’s star midfielder Katherine Hoffman.

“They are a super athletic team and organized in what they do, real well coached,” Burnside said. “They swarm you and you don’t have too much time so we had to have it on and off our foot quickly. And the key was we had to defend well.”

Burnside gave plenty of props to his freshman goalkeeper Caroline Hague, who was consistently in the right spots and was aggressive coming off her line to control balls in the box. He said it was “her most composed” game all season.

OPRF’s keeper was not to be outdone. Coming out of a halftime draw, New Trier drew a penalty kick when Noble was taken down in the box. But Gery turned back Lida Dodge’s shot attempt to keep the game scoreless.

The Trevians, though, kept the pressure on throughout the half. And then Burnside subbed in McNally.

“I said I need a good six minutes of pure Teagan athleticism. And that is exactly what she did,” Burnside said.

As the teams fought for possession near the sideline midway into OPRF territory, Trevs defender Clara Deliduka got to the ball, had a sliver of space and served it toward the top of the box.

The pass landed in empty space and bounced into a dangerous position.

“The keeper came out super far. She’s aggressive; she’s a great keeper,” Deliduka said. “So I just figured I might as well put it in the box and see what we could get on it.”

McNally had the right angle over the defenders and arrived first at the pass. She rose to meet it with her head a split second before the charging Gery.

The ball bounded freely across the goal line with 15:42 to go.

The Huskies could not muster much of an attack in the waning moments, as the Trevians defense stepped up while the offense played a hybrid of keep-away and hide-and-seek until the final buzzer.

Burnside said the Trevians played one of their best games of the season at the most important time.

“Our girls really did exactly what we wanted them to do,” he said. “We changed things around a little bit. One of the first times this season we’ve all kind of come together and known what we had to do. Now, that’s on us as coaches, but they were really locked into this game. They wanted it.”

New Trier moves on to face rival and sectional top seed Evanston on Tuesday, May 24, in Northfield. The Wildkits picked up a forfeit win over Lincoln Park in their regional finale.