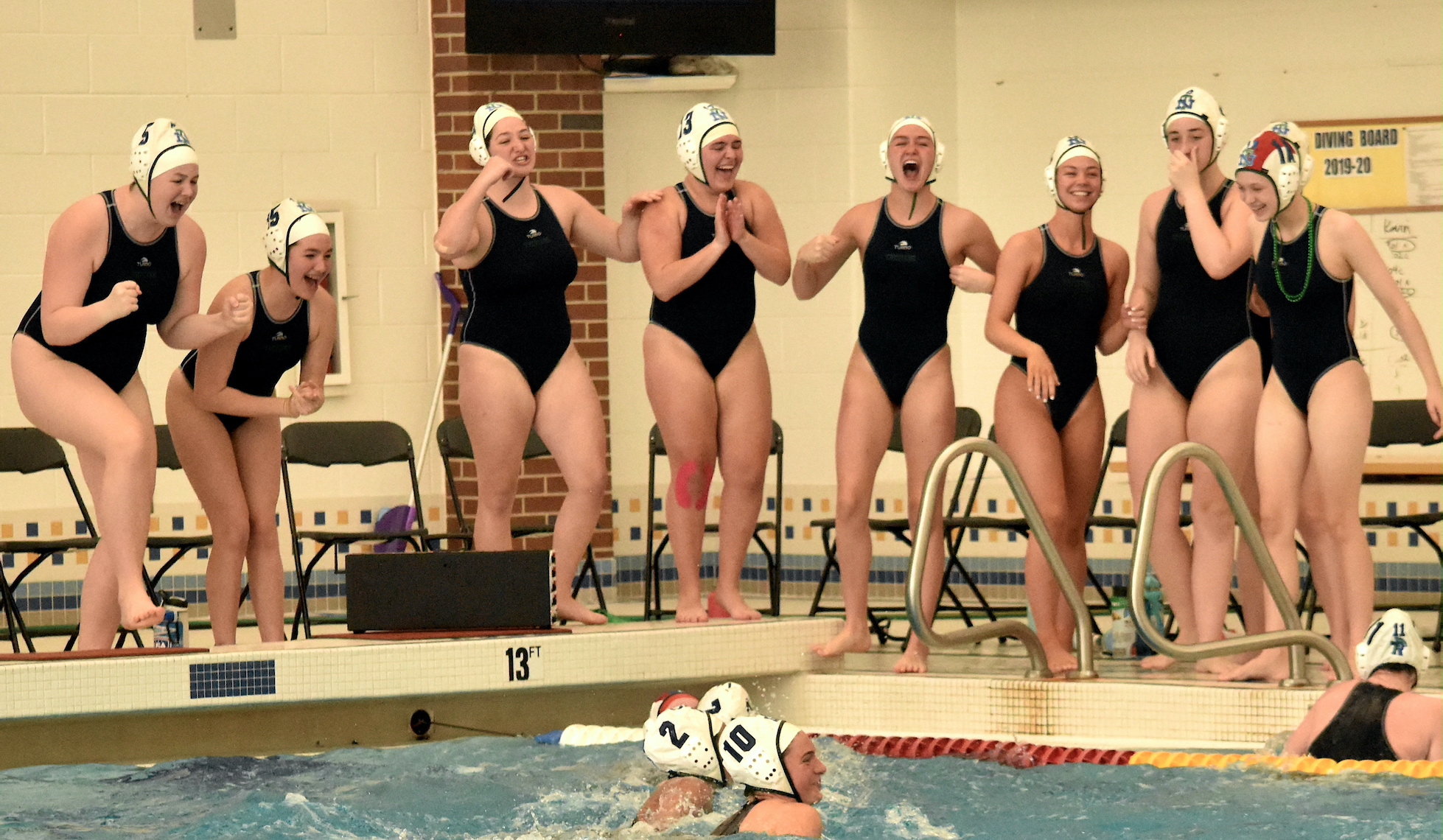 It was a good day to be a Trevians water polo player.

Both the boys and girls squads punched their tickets to the state finals with victories in their sectional finales Saturday, May 14, at Glenbrook High School.

Previously turned away three times by the Central Suburban League champion Evanston Wildkits, the New Trier girls water polo team got the upper hand when it mattered most in the sectional championship.

Emma Wendt’s high-arching shot from halfway across the pool at the end of the third period gave New Trier (23-7-1) a 6-2 lead and momentum heading into the fourth after the Wildkits had found something of a spark to start the second half.

“I love making those long shots, the Hail Mary, just seeing if (I) can make it,” Wendt said. “I knew I was going to shoot it.”

En route to the New Trier’s 9-5 victory, Wendt scored three goals, as did the less-experienced Charlize Escasa. One of the best breaststroke swimmers for her age group in the country, Escasa used her length and superior water abilities to score, prove to be a nuisance when defending.

“I felt really welcomed going into the team and what made me really want to play (this season) was last year I had a really fun time with the team,” Escasa said. “I think water polo is one of the most intimate sports. We’re like best friends.”

The Trevs locked down the Wildkits in the first half, taking a 4-0 lead into the halftime break.

Four different Trevians netted goals in the first half — Emma Wendt, Escasa, Sophia Iskowich and Audrey Pelzek. Several Wildkits shots also bounced off the post in their scoreless first half.

The Trevians were honed in on the task at hand right from the beginning of the matchup. Coach Matt Wendt said that the difference for the offense this time was opening up the game by shooting from distance, rather than forcing the ball inside the 2-meter area.

For Emma Wendt, the match was won with the team’s mental approach.

“We just wanted to stay focused,” the senior said. “Before the game we did a power stance. We all just went in super positive and motivated and we just wanted to feel good and confident about our skills. Take a breather before the chaos, slow it down, focus on what we know and just do it.”

“(Chang) stepped into a role she was unaccustomed to and she stepped up big,” coach Wendt said.

Annie Lewis totaled four assists for New Trier, Chiang had one and Duffy had another.

Evanston cut the deficit to 6-3 in the final period as New Trier attempted to stall, but the Trevs added two more quick goals to put the game away.

“The difference was we stopped forcing the ball inside and started shooting from the outside,” Matt Wendt said. “Some players, Emma showed up, Charlie showed up big and then also our subs. Sophia (Iskowich) put a goal in from two meters and Audrey (Pelzek) put in a goal which was unexpected. Great to see.”

Evanston was ranked No. 4 and New Trier 5 in the latest illpolo.com rankings.

“We never really got into our game,” Evanston coach Andy Miner said. “That’s testament to the coaching at New Trier… we’d beaten them three times coming into this game and they just made a lot of adjustments and came out and played a really full, complete game and never really let us get into our game.”

With the win, New Trier girls water polo has qualified for state seven times in the past eight seasons, including the past three seasons. The Trevs are looking to cinch their fifth state trophy (top four) when they square off against Lane Tech Friday at 5:45 p.m. Friday, May 22, at Stevenson. The winner of that game will play either Stevenson or Fenwick matchup in a state semifinal matchup the next day.

Trevians boys discard Hawks, but ‘the job’s not finished’

Riccardo Ricciardi scored five goals in the first half and the New Trier Tevians boys water polo team continued its march toward state with an 18-5 thrashing of the Maine South Hawks in Saturday’s Glenbrook South Sectional championship.

The Trevians raced to a 7-1 lead after a period. Noah Wendt and Ricciardi added goals to stretch the lead a seemingly insurmountable 9-1 advantage.

“Recently I’ve been feeling a lot better. They open it up,” Ricciardi said of his teammates, some of whom he has played with for six years. “Thomas (Dean) is doing his job down low, which opens up all these shots on top. People are coming back on offense which allows me to then maybe press up so I can leave early and get on the counterattack and set everything up. I actually feel very good about it. I feel better than I ever have on a team.”

Hawks star Stevan Racic answered back seven seconds after Ricciardi’s goal, but the Trevians added two more goals before the end of the half, one from Ricciardi and one from Dean for a 12-2 advantage to leave no doubt.

New Trier coach David Rafferty-Flatter said his team still has work to do.

“Probably not as locked in as we’d like them to be, but it’s really about setting the tempo and setting that pace and bigger than water polo, giving them the skills to walk into a room and command it,” he said.

“This team, there really is six or seven leaders in the water at any given time. They’re all sort of alpha males and that really helps with that tempo and that pace.”

Rafferty-Flatter noted that Bailey, Will Moran, and both goalies — Elijah Sternweiler (a Pacific University recruit) and Luke Schermerhorn — all stepped up.

All season, the Trevians have had a state championship on their minds. They cleared a hurdle Saturday.

“The job’s not finished,” Ricciardi said. “We’re only two out of the three (championships) we wanted to win. This is just a warmup for us. We want crisper passes. We had a lot of bad passes this game. The mentality was good. We want to show that we’re not just a counter team. We want to show that we can actually play a set offense, we can run a 6 on 5 very well.”

The win upped New Trier’s record to 30-2, making this season’s win total the most the Trevians have registered since recording 33 wins in the 2017 season. Having placed at state three times, with a best finish of runner-up, the Trevians have their eyes set on Palatine, which defeated Fremd 9-6 to reach the state quarterfinals.

The Trevs are scheduled to play the Pirates at 7 p.m. Thursday, May 19, at Stevenson High School.

Illpolo.com has New Trier ranked second in the state. A Trevs’ win in the quarterfinal matchup would set up a semifinal bout with either Lyons or Naperville North, ranked No. 2 and 3, respectively.

The Trevians have never won a state championship.

“At no given time are we too high or even too low,” Rafferty-Flatter said. “Talking about where we are, who we’re with, what’s happening and what we can control in the water has helped these guys. Nothing has gotten too big and nothing has gotten too small for them yet.”