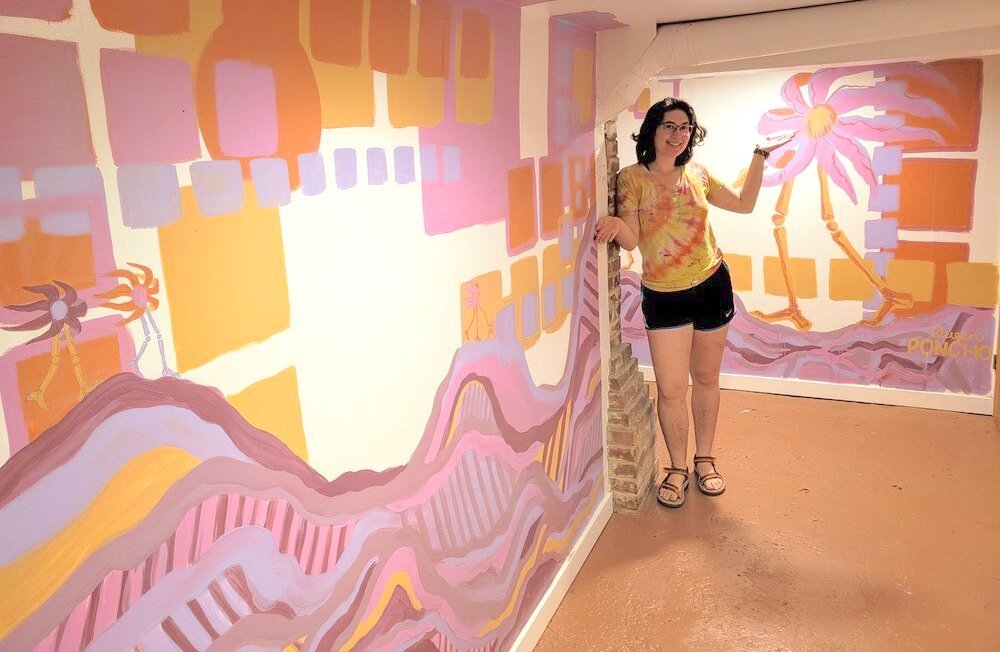 Wilmette native Issy Wilson with a mural she completed at a hostel along the Appalachian Trail in Virginia. | Photos Submitted

Artist Isabelle “Issy” Wilson has strong roots in Wilmette that have provided a foundation as her career branches out.

Wilson is a multi-disciplinary artist who recently tried her brush at murals, completing six of them in a special return to the Appalachian Trail.

Inspiration for the Appalachian Trail series struck in November 2020 after Wilson returned home from a four-month trek along the iconic path — a 2,100-mile stretch that passes through 14 eastern states.

Having just graduated from the University of Michigan with a fine arts degree, but facing a COVID-disrupted world with limited job, internship or residency opportunities, Wilson recognized that the summer of 2020 was “a summer you don’t really get again,” and with friends, she decided to explore the trail.

Though inexperienced as a hiker, Wilson immersed herself in the trek, thriving off the region’s famously supportive camaraderie and trusting community. Despite her aching feet, knees, and body, she felt surprisingly healthy.

Upon returning home, as the cold descended upon Chicagoland and society was grappling with the tumultuous 2020 presidential election, Wilson felt a shift in her art. She began a new, bright campaign, the “Flower People” series, using watercolors to create vibrant flower heads with legs to explore what the world had to offer.

This series — which among other things captured the juxtaposition she felt between her healthy mindset and tired body while hiking — compelled her to return to the trail. She began asking hostels if she could paint “Flower People” murals in exchange for accommodations. Several were eager for the deal.

In the spring of 2021, armed with $300 in paint, Wilson painted murals at six hostels along the Appalachian Trail. The murals are whimsical compositions that show little evidence of the grueling work of painting them in hot weather and high humidity.

“I had never done a mural before. I just needed to get through the first and second one, and then I was good. It got so much easier,” Wilson said of her process.

Through word of mouth and other connections, Wilson brought her murals off-trail and has since painted at Elsewhere Brewing in Atlanta and Lock Chicago and Salon Soto, both in Evanston, among other places.

As a diverse artist, Wilson doesn’t restrict herself to just painting. She recently organized a collaborative artist quilt, for which 89 artists contributed to her vision of green, branch-like objects connected together.

Inspired by the mature trees of both the Appalachian Trail and her hometown of Wilmette, Wilson wanted the quilt to represent the connections she has with the other artists and the underground networks shared by plants. The 5 1/2-by-16-foot quilt was shown in Evanston on May 1 before it headed to her alma mater in Ann Arbor to be installed for the rest of summer.

A 2016 New Trier High School graduate, Wilson credits her hometown for not only providing natural inspiration, but also for the people and teachers who have created the strong connections in her support system.

“I feel very grounded,” she said of her background.

Strong roots do have that effect, and only time will tell where Wilson’s next branches will grow.

To learn more about Issy Wilson and her art, visit her Instagram page or her artist website.